Ben Hallworth built a circuit board at age four and created a physics app in high school. What will he achieve at UAlberta? 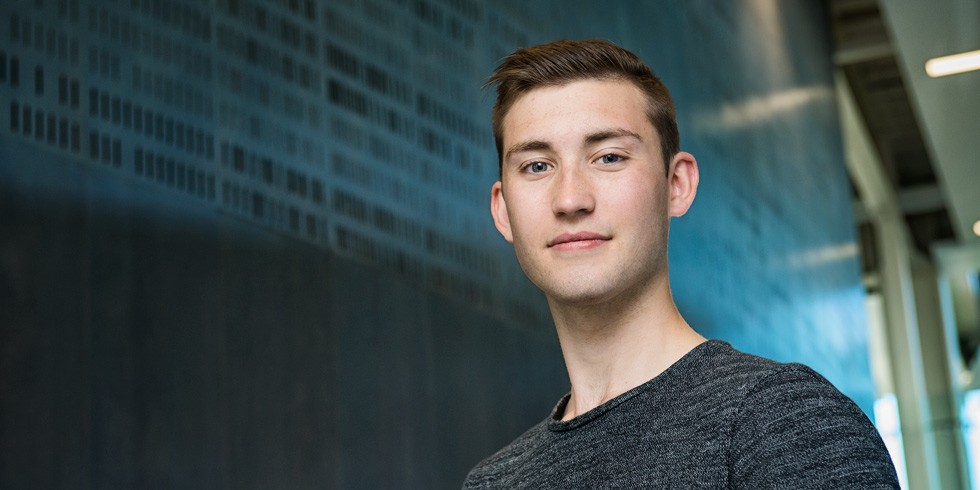 Ben Hallworth parlayed his prodigious technical talents and determination into one of Canada's most lucrative undergraduate scholarships. (Photo: Richard Siemens)

Ben Hallworth found out pretty early in life that he could help others using his prodigious talents.

Having assembled his first circuit board at the age of four and spending his summers at the U of A’s engineering camps, Hallworth, while attending Edmonton’s Strathcona High School, used his knowledge in computer programming to develop an application called Physics Toolbox, which helps students perform unit conversions and find solutions to most physics problems taught in the curriculum. That app is now being used by more than 500 students and teachers in several countries.

And while education tools are a virtuous endeavour, Hallworth, who was named a University of Alberta 2016 Schulich Leader Scholarship winner, took his career lead way back in 2010 from Hugh Herr, an engineer, biophysicist and world­-class rock climber who also happens to be a double­ amputee. It was shortly after a horrific rock-climbing accident that Herr began to apply biophysics to improve the interface between prosthesis and the human body and lead his team at MIT to the forefront of biomedical engineering.

“My vision is to go even further and utilize physics and engineering, inspired by the fusion of art and science already present in nature, to augment human performance through the implementation of neural-­integrated prostheses,” wrote Hallworth in his Schulich scholarship application.

Hallworth knows a little about overcoming adversity himself. A routine checkup last year revealed that he required spinal surgery, and that a prolonged recovery was an obstacle that stood in the way of his goal of being Strathcona’s top student.

Undeterred, he organized an online study group with dozens of peers similarly keen to delve deeper into the course material. After hundreds of hours leading peer-­to-­peer online collaboration, he not only achieved the highest academic average, but also saw many others in his online group achieve academic honours as well.

“This experience showed me the value of teamwork and the power of tenacity in the face of adversity,” said the first-year engineering student, adding he has learned that leaders cannot succeed alone. “It is essential that a team collaborates towards a common goal.”

Hallworth also found time to take a leadership role in representing youth. In 2014, he became involved in the District Legacy Course, a brainchild of the Edmonton Public School Board intended to foster leaders. From there, he was nominated as one of 30 candidates chosen from a pool of tens of thousands of students to campaign in the inaugural EPSB student trustee elections.

In 2015, Hallworth had an opportunity to be part of the Heritage Youth Research Summer Program at the U of A, where he worked with graduate students in a multi­disciplinary lab to design and execute an experimental protocol investigating the regeneration of neurological pathways.

Hallworth, who somehow finds time to participate in every aspect of his local karate organization, says his greatest blessings and sources of inspiration have been the people in his life who have invested countless hours in him.

“I am constantly mindful of how fortunate I am to have had these great people, my loving parents especially, in my life, and the incredible opportunities that they have afforded me,” he said. “It is to them that I attribute my success.

“For this same reason, I believe it is my responsibility to give back to my community, and others around me.”

Hallworth and Sheldon Cannon are the two U of A students among 50 students across Canada to receive four-year scholarships of $60,000 to $80,000, depending on their chosen profession. The Schulich Leaders program recognizes Canadian high-school students who demonstrate excellence in academics and community leadership, and who plan to study science, technology, engineering or mathematics.