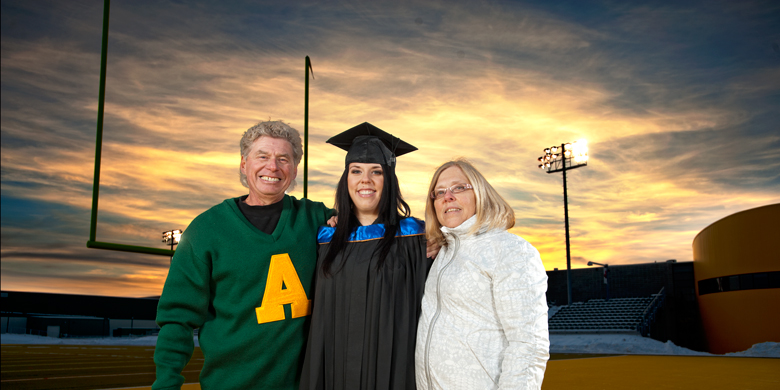 121121-fallconvo-lindsayschulha-banner
Celebrating a green and gold goal: Lindsay Schulha, pictured with proud parents Dale and Bonnie, is the fifth member of her family to earn a degree from the Faculty of Physical Education and Recreation at UAlberta. (Photo: Richard Siemens)

(Edmonton) The University of Alberta has always been Lindsay Schulha’s playground.

It’s no wonder, considering Schulha’s parents, Dale and Bonnie, met 40 years ago as undergraduates in the Faculty of Physical Education and Recreation, where the family roots run deep. Bonnie was on the figure skating team; Dale played football for the Golden Bears and later received a master’s degree before spending 25 years with the faculty—including two terms as director of athletics.

Green and gold also runs in the veins of brothers Ryan and Aaron. Ryan, the oldest, also graduated with a physical education degree (class of ‘02) and played for the football Bears, where he now coaches. Aaron received bachelor’s (‘05) and master’s degrees in coaching (‘09) and played Bears volleyball. (He is now head coach of men’s volleyball at Red Deer College).

“My weekends definitely consisted of U of A Athletics,” says Lindsay, the youngest at 26, who as a one-month-old could be seen bundled up in the stands at campus games.

Friday nights were spent in the gym for volleyball or basketball, in between shuttling to hockey rinks. Saturdays meant football tailgate parties and even more time in the gym or rink. If there was a Sunday game to play, the Schulhas were there.

“I pretty much spent the majority of my spare time on the U of A campus,” says Lindsay. “Studying here was like a natural, going-home sort of feeling for me.”

On Nov. 20, when Lindsay received her degree in recreation, sport and tourism, she became the fifth member of her immediate family to graduate from the physical education faculty. In fact, her degree marks the family’s seventh—how’s that for a compelling stat line?

Although she is certainly proud to be part of an impressive family legacy, Lindsay says it wasn’t her only reason for choosing the U of A and its strong academic and athletic traditions.

If anything, the family history and advice from mom and dad helped Lindsay find her true path after her first choice, athletic therapy, wasn’t the right fit. Like any smart player faced with a broken play, she consulted Coach Dad, who suggested recreation, sport and tourism. Touchdown!

“It was a life-changing moment for me,” she says. “As soon as I started taking those courses I knew it was the right program for me. It was so much like home.”

“Home away from home”

Looking back, it was the sort of winning advice that underscored the supportive environment in the Schulha household. Though certain rules were demanded—like getting a post-secondary education—following in mom and dad’s footsteps was not among them, Dale says.

But that doesn’t mean there isn’t some pride over how things turned out.

“Since I was 18 years old and Bonnie was 18 years old, it’s been a home away from home for both of us,” says Dale, who stepped down as athletics director in 2010. “To see your kids go that route and develop so many of their own fond memories of our faculty and of their university and their athletic careers at the university, and to see them with lifelong friends—it’s pretty special.”

Convocation will be extra emotional for the Schulhas after a serious cardiac event prevented Dale from attending Aaron’s ceremony in 2009. Still part of the phys-ed faculty, he’ll have a good view from the stage.

“It’s going to be emotional for me because of how things turned out,” he says, voice wavering slightly. “I’ll be thankful in so many ways and feel so special with our family situation. The university has been so good to us as a family.”

For Lindsay, convocation marks the end of studies that have exposed her to a world of possibilities, from playing Pandas soccer for a year to doing a practicum with the 2012 Alberta Winter Games, where she also landed a job as one of four games co-ordinators. It was a diverse portfolio in which she managed 21 different sports, 26 facilities and 31 cultural performances for one large event with nearly 3,000 athletes.

“It was unbelievable. It was by far the best thing that could have ever happened to me,” says Lindsay of the experience. “It set me up unbelievably well for handling that kind of multidimensionality and multitasking, and through that experience I definitely did get a bit of games fever.”

The games may have ended, but Lindsay is well on her way to a career in sports management. She currently works for Lake Summerside Residents’ Association, as a special events/program co-ordinator. Ultimately, she aspires to hold an athletics directorship or other leadership role—kind of like another Schulha.

“Typically, of course, just like my dad,” she laughs.