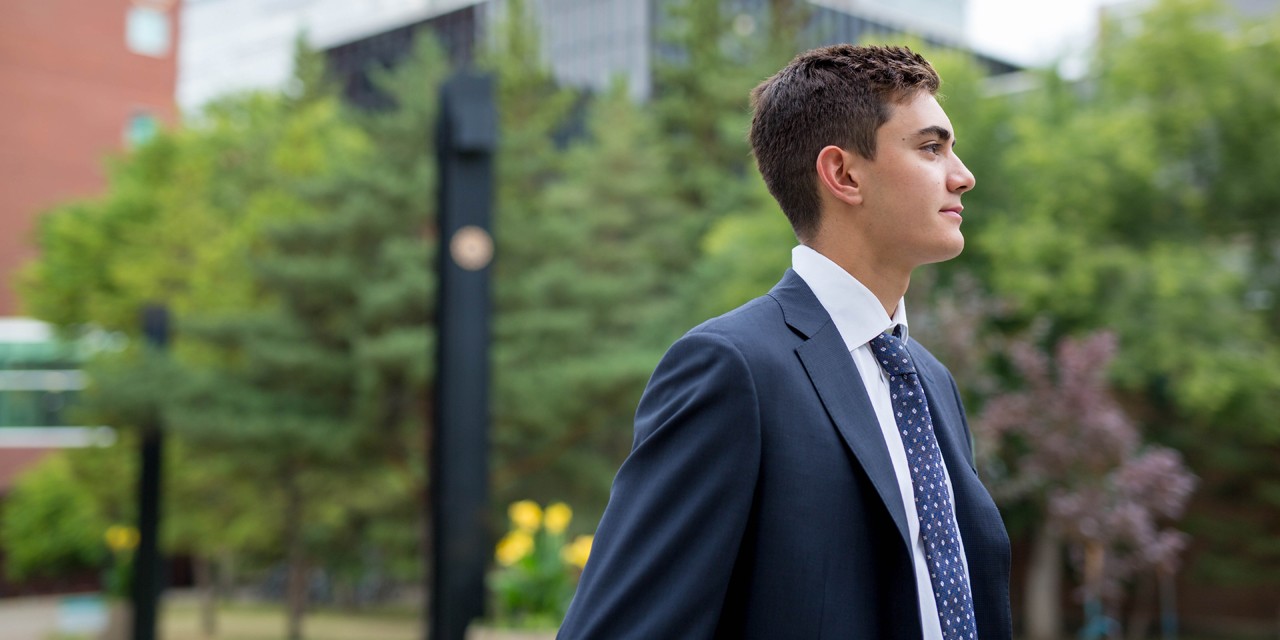 From summers on the farm to classes in the big city, Sean Sander is determined to continue his passion for environmental stewardship at UAlberta. (Supplied photo)

Spending summers working on the farm with his grandfather in southern Alberta, Sean Sander quickly developed a deep connection to the environment that led him to an important realization.

“Despite numerous technological advances, human existence remains intimately tied to our environment and the food we consume,” said Sander, a first year UAlberta engineering student and recipient of the 2017 Schulich Leader Scholarship.

In 2013, armed with this special insight about the environment, Sander travelled to New York as part of a three-week exchange called the Youth Ambassador Program with Canada. He returned home to Lethbridge with an increased understanding of the policies surrounding climate change and the role he could play in environmental stewardship within his community.

That’s when he started a school-wide composting program to address the food waste in his junior high school’s cafeteria, a program has been operating for three years.

In 2015, Sander was selected by the Alberta Council for Global Cooperation to travel to Hamburg, South Africa to learn about the Keiskamma Trust, a multi-faceted project dedicated to bringing hope and health back to a region decimated by the AIDS pandemic.

Sander said he was particularly interested in learning about the innovative methods the residents of Hamburg employed in their community garden to work with their natural environment.

“There is a lot we can learn from collaborating with South African growers, who practice the agricultural techniques of natural pesticides and crop rotation,” he said.

Sander is also a freshwater aquarium enthusiast. In fact, he developed a system that allowed aquatic plants to grow significantly faster, which led to his a small business selling freshwater plants and tropical fish. With the profits, Sander has funded aquariums for several community organizations.

Through his involvement in the Heritage Youth Summer Research Program and the Canada Animal Diseases Research Institute, Sander developed a number of skills in scientific inquiry. His work with E. coli bacteria taught him about genetically modified organisms and the pros and cons of their use in food, and he has learned how pollution can manifest itself through illness in animals.

Sander says for him, engineering is the best path towards solving global problems such as eradicating world hunger, providing clean water, protecting the environment and improving people’s quality of life.

“Engineers are taught problem solving and critical thinking, while remaining open-minded and intuitive,” he said. “They find solutions to global issues by crafting technologies and discovering ground-breaking research.”

Sander and Natasha Danha are two of 50 students across Canada to receive four-year scholarships of $80,000 to $100,000, depending on their chosen profession. The Schulich Leaders program recognizes Canadian high-school students who demonstrate excellence in academics and community leadership, and who plan to study science, technology, engineering or mathematics.