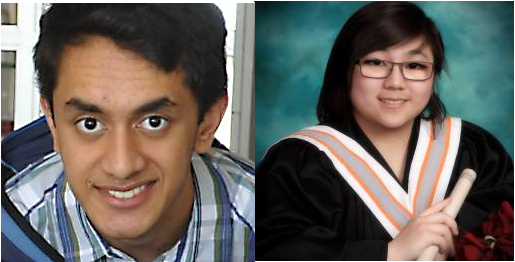 (Edmonton) Captaining their respective high-school swim teams coupled with a zest for citizenship made quite a splash for the University of Alberta-bound Chelsea Hong and Kirtan Dhunnoo, who have been named Schulich Leaders.

The annual Schulich Leader Scholarships program recognizes Canadian high-school students who demonstrate excellence in academics and community leadership, and who plan to study science, technology, engineering or mathematics. The program awards 40 students headed to 20 Canadian universities with four-year scholarships of $60,000 to $80,000 depending on their chosen profession.

In her application for the award, Chelsea Hong, who has been admitted into the U of A’s Faculty of Science, wrote that the most important lesson she’s learned in her wide array of volunteering is patience.

“Whether it be practising patience when catering to other people or even having patience with myself and my own limits, patience was a lesson I struggled to learn time and time again,” she added. “When working with others, patience is key to building deeper connections and maintaining high morale within the group.”

And when it comes to patience, like anything, practice makes perfect—something Hong took to heart.

The M.E. LaZerte product was a vice-president in her school’s Junior Achievement Company Program and volunteered as student water ambassador for East of the Mountains, a collaborative water conservation awareness project that partners with sister schools in China. She was also president of the Mandarin Graduation Committee and a board member with the M.E. LaZerte students’ union, helped organize Taste of LaZerte, was captain of her swim team and worked as an intern at the Cross Cancer Institute in U of A researcher Linda Pilarski’s oncology lab in 2013 as part of the Heritage Youth Research Program.

Along with finding patience, the aspiring “science hero” says her experiences gave her lessons in leadership.

“Leading isn’t about standing above others and hoping they will keep up with you, but rather it’s about being the one behind everyone, encouraging them to move forward and reach their potential.”

Kirtan Dhunnoo, who graduated from Lord Strathcona High School in the spring, also made it clear in his application that leadership was a central theme of his citizenship experience.

Captain of the Lord’s 120-plus-member swim team, the first-year mechanical engineering student says he quickly found out that every person on the team showed leadership in their own way.

“Not only are there leaders by labels, but there are leaders by virtue of their widely different personalities,” he wrote. “As a result, many good ideas sprang up that many had never in their wildest dreams thought of, and it was in this way that I realized that there is no set definition to being a leader.

“I feel that anyone has the ability and capacity to rise up to the challenge and start a fundraiser, for example. All that matters is that the person in question builds on their individual strengths and uses them to become a unique leader.”

Dhunnoo, who has his sights set on one day becoming an astronaut, was also key organizer with Scona Remembers, a project to honour Strathcona graduates who contributed to Canada's war effort over the last century, as well as the school’s Remembrance Day ceremonies. He is also active with the Shri Shri Radha Govindaji Temple.

Those experiences left Dhunnoo with bits of wisdom including, “It’s what you do when nobody’s looking that counts the most,” “Always be genuine” and “A little humility never hurts,” a notion he learned while dealing with veterans of the Second World War.

“Some of these people have been given numerous awards and medals for their contributions to Canada, and are quite wealthy and successful in their private enterprises. Despite all this, they are quite friendly and do not talk of their achievements. For them, the medals mean nothing. It is the fact that their work made a significant difference in many lives that makes them happy and keeps them going.”

Canadian business leader and philanthropist Seymour Schulich created the Schulich Leader Scholarships. The $100-million scholarship initiative was implemented to secure Canada’s future economic competitiveness and is designed to ensure that future Canadian leaders are among the next pioneers of global scientific research and innovation.