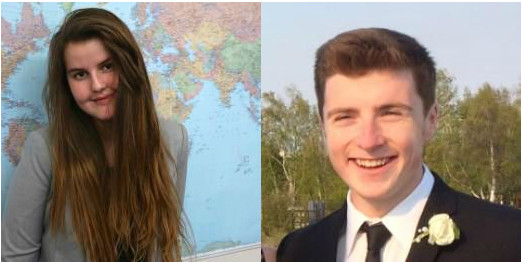 (Edmonton) A contagious passion for discovery has landed Jamie Dublanko and Kyle McKee at the steps of the University of Alberta as Schulich Leaders.

The annual Schulich Leader Scholarships program recognizes Canadian high-school students who demonstrate excellence in academics and community leadership, and who plan to study science, technology, engineering or mathematics. The program awards 40 students headed to 20 Canadian universities with four-year scholarships of $60,000 to $80,000 depending on their chosen profession.

In her application for the award, Jamie Dublanko, who is set on pursuing a science degree in molecular genetics, wrote that her leadership aspirations stem from the wide array of leadership opportunities offered at her high school.

“It is from this leadership community that I have learned my skills in co-operation, communication and taking initiative which have propelled me into the other areas of leadership and inspired me to work hard for the betterment of our community,” she said.

Dublanko went from organizing school pep rallies and a haunted house to becoming the student director for the government and international government engagement teams for The Centre for Global Education, and presented a paper on climate change at the organization’s Conference for the Youth in Peru. Last year, Dublanko was named one of Alberta’s top 30 under 30 by the Alberta Council for Global Cooperation.

Despite receiving the second-highest mark in the Alberta and Northwest Territories 2014 Canadian Chemistry Competition, Dublanko says biology, epigenetics and the potential to control the human genome are what inspire her.

Her calling was solidified during a two-month internship at the U of A Hospital emergency room last summer.

“Through these experiences I have learned that leadership can grow stale and static without innovation, but that innovative leaders are always trying to better themselves and their ideas in order to continually inspire community change and engagement. This is the sort of leader I am and will always seek to be,” she wrote.

Kyle McKee’s experiences were shaded by his hometown of Yellowknife, where his potential showed from the beginning.

He received the Minister’s Award for achieving 100 per cent on the Grade 12 math departmental examination—which he took in Grade 11—and achieved the highest average in his high school every year.

McKee, who plans to study engineering at the U of A, says he is driven by a desire to understand how the world around him works and how he can use this knowledge for the betterment of society.

“What intrigues me more is that there are still things we don’t understand and that one day I may be involved in the scientific breakthroughs that shed light on these ambiguities,” he said. “I do not see education as a mere prerequisite for a well-paying job, but rather as a tool that has the potential to change the world.”

Sports have also played an integral role in his life. He served as captain of his hockey team; played football, soccer and basketball; and is a skilled snowboarder, representing the Northwest Territories at the 2014 International Arctic Games in Alaska.

McKee says it was sport that gave him an opportunity to make an immediate and tangible impact—empowering people living with disability. Through his involvement in the Territorial Special Olympics program, McKee—who has a twin brother with severe autism—was able to support social, cognitive and athletic development of people with intellectual and developmental disabilities.

“I found this incredibly rewarding, especially since I was able to experience first-hand the development that my brother had by participating in the program,” said McKee.

Witnessing his brother begin to thrive, McKee was also made aware of the lack of social programming available to youth with disabilities in his community. It was then that McKee found leadership roles in similar organizations such as the northern chapter of Best Buddies, a group that fosters natural friendships between youth with intellectual disabilities and mainstream youth, as well as the NWT Autism Society and the NWT Disabilities Council.

“By receiving this scholarship, I will be able to gain a skill set that will allow me to return and contribute to the North as a leader and a successful mentor,” he said.