Two exceptional first-year students are starting off their engineering and science studies at the U of A with one of Canada’s richest undergrad scholarships. 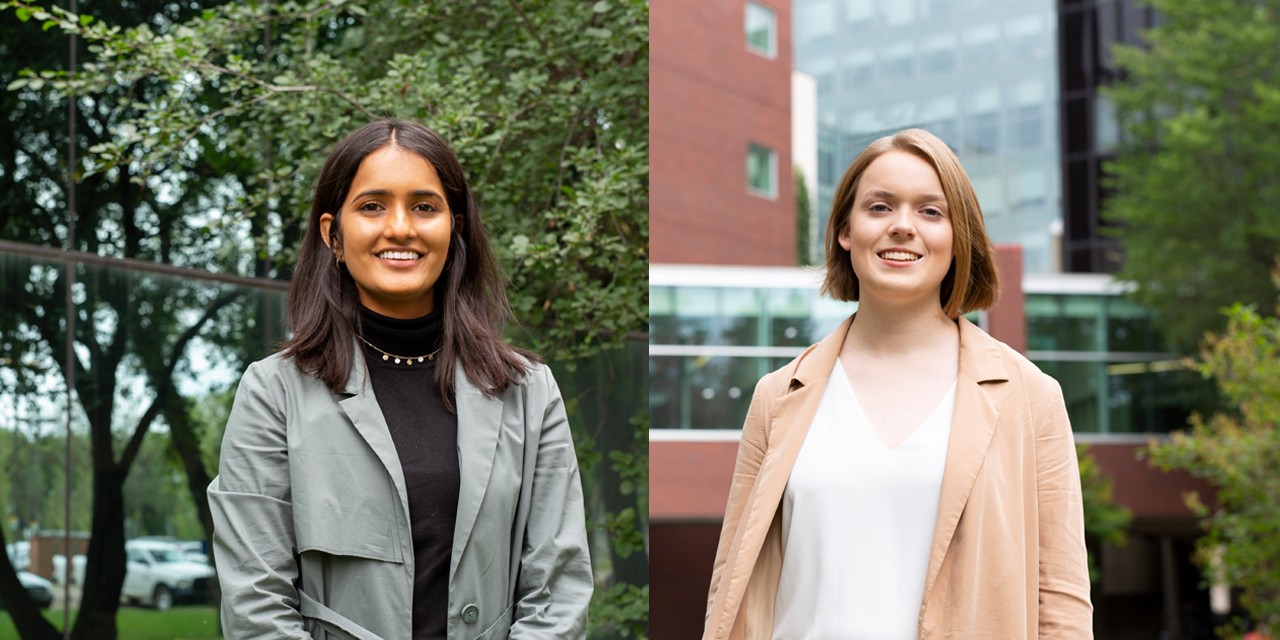 A shared passion for the possibilities of science, technology, engineering and mathematics (STEM) education has earned two first-year students at the University of Alberta one of Canada’s most valuable undergraduate scholarships.

Engineering student Gillian Besko and science student Anoushka Gaekwad are among 50 students across Canada who received four-year Schulich Leader scholarships of $80,000 to $100,000, depending on their chosen field of study.

At her high school, Besko balanced achieving top marks with advocating for some of society’s most vulnerable groups.

“I co-founded Step Forward, my school’s female empowerment committee, with the simple mission of educating students on gender equality,” she said.

Step Forward has made significant contributions to both local and international efforts through outreach and donations. Most notably, the committee has sent six girls in Lesotho to school.

As an executive member of her school’s human rights team, Besko brought focus to such topics as Islamophobia, missing and murdered Indigenous women, and the LGBTQ+ community. Despite obstacles and pushback from administration, Besko prevailed and learned how to approach these topics in a subtle but effective way.

Tackling some of the world’s toughest issues while maintaining a high academic average was a welcome challenge for Besko, who finished every school year with straight A+ marks and an average of 98 per cent. This resulted in her receiving the Christine Skublics Award, given to students with the top three averages in their respective grades.

Besko also received the highest mark in her school on the University of Waterloo’s math competition on four separate occasions, and her essay on Grosse Ile received an award from the Genealogical Society of Manitoba at the Red River Heritage Fair.

“What I believe makes me truly unique is my insatiable curiosity, love of learning and willingness to push myself beyond my comfort zone,” said Besko. “I am not satisfied unless I am challenging myself.”

In her free time, Besko taught herself Italian, introductory computer science and several programming languages, and learned to play guitar.

As if that weren’t enough, Besko tackled her shyness and anxiety head-on by joining the debate team, where she went on to compete in the Junior Nationals, place at the Donohoe Cup and be recognized as top debater in her school.

Her thirst to learn and grow drove Besko to apply to the SHAD program at the University of Waterloo, where she was exposed to engineering, the design process and many other STEM fields.

“A truly capable leader never ceases to learn and grow, and has the courage to challenge injustices and weakness both in the world and in themselves.”

Besko said she hopes to be in a career that will allow her to solve real-world problems—particularly the use of social media by hate groups, and how this abuse of such a powerful tool might be combatted.

Gaekwad’s childhood dream took flight when she earned her pilot’s licence in the summer of 2017.

“Earning my pilot’s licence through the Air Cadet program was one of my proudest moments”, she said.

Gaekwad’s passion for science and math has driven her to become an advocate for STEM programs in her community. “Science and technology, specifically, need ongoing development in order to protect and sustain life on earth,” said Gaekwad.

As a board member of PRAXIS: the science committee, Gaekwad was responsible for building an interest in STEM programs. “One specific program that we run, called Operation Minerva, serves to involve young women in STEM-based careers.”

A high academic achiever, Gaekwad was a top honours student and received the highest average of her class in math for three consecutive years. She tutors mathematics, science and French to students at her school, and teaches in a mathematics program called UCMAS aimed at improving students’ mental math skills.

As a senior instructor in the Canadian Air Cadet Program, Gaekwad focuses on educating her fellow cadets on topics such as aviation.

“Through my training, I have acquired skills that give me further insight on topics such as meteorology, aero-engines and the theory of flight,” she said. “As I improve my own skills, I relay what I learn to my fellow cadets.”

Gaekwad said she strives to be a global pioneer in creating a better future for generations to come.

“Science is an adventure into the unknown, and I want to share its discovery and generate interest in others to expand the areas we impact as innovators.”

Gaekwad plans to enter the Canadian Armed Forces as an astrophysicist, where she will aim to improve our understanding of magnetic fields and their impact on cosmic evolution.

The Schulich Leaders program recognizes Canadian high-school students who demonstrate excellence in academics and community leadership, and who plan to study science, technology, engineering or mathematics.

Three graduate students at the University of Alberta developed a new, interactive tool to help provide insight into the COVID-19 pandemic. “The goal is to transform the dynamic big data to charts …
Read more from this release

In the early days of the coronavirus outbreak, it was the Diamond Princess cruise ship, not a country, that trailed only China in the number confirmed COVID-19 cases. While the ill-fated trip dragged …
Read more from this release