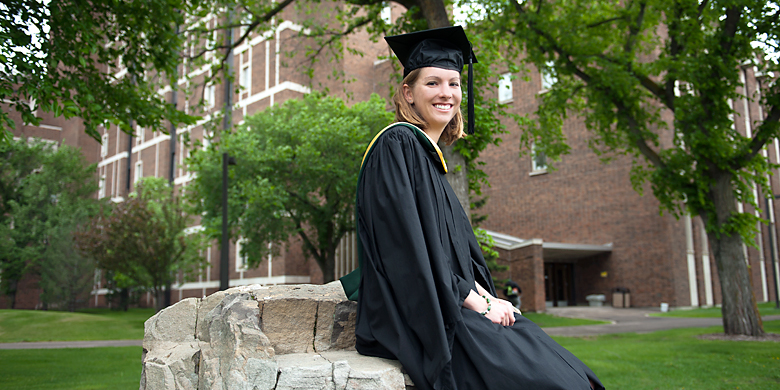 120607-lindseyheagy-banner
Lindsey Heagy discovered her interest in geophysics during a class in Science 100. (Photo: Richard Siemens)

(Edmonton) This year’s crop of University of Alberta undergrads heading to commencement includes a tight-knit group who started their post-secondary journey together four years ago in the inaugural class of Science 100.

The 40 first-year students signed on for a brand-new learning experience in seven sciences: chemistry, biology, math, physics, earth and atmospheric sciences, and psychology.

Lindsey Heagy was in that group. And like many of her classmates, she wasn’t sure where she’d end up. “When I started university I had no idea what I wanted to do, but I always liked sciences and the small class size in Science 100 helped focus my interest,” she said. “It also helped me connect the dots between different fields of study.”

David Lawrie, the U of A’s course co-ordinator for Science 100, says that was one of his goals for the course.

“We looked at existing first-year science courses and, when possible, combined shared subject matter between seemingly unconnected fields of study into a single lab-class,” said Lawrie.

“For example, both first-year chemistry and physics look at properties of light; the Science 100 approach is to bring the two together to show students that scientific knowledge spills over from one area of study to another.”

Science 100’s active, discovery-based learning opened up a lot of possibilities for Heagy, who particularly liked the “spontaneous connections” students and teachers came up with.

It was during a class in which they looked at pictures of Mexico’s famous Chicxulub crater that Heagy found her calling: geophysics. “That’s when my focus shifted from math to geophysics; I liked the huge scale of the science.”

The switch paid off. Last summer Heagy got a posting at an oceanography institute in Germany, and in the fall she begins graduate studies in geophysics at the University of British Columbia.

Heagy made her mark at the U of A and at the Faculty of Science commencement on June 6 as she was presented with the Lieutenant-Governor’s Gold Medal for the highest distinction in scholarship. Heagy was also chosen to deliver the convocation speech for the graduating class. This is how Heagy remembered her first year at the U of A in Science 100:

“Being accepted its inaugural year was essentially volunteering to be a part of an exciting experiment on teaching and learning—the test subjects of this experiment being both the students and professors. A lot of the aspects of this experiment exceeded everyone’s expectations. The group projects and hands-on learning created a unique environment that included some of the most fun I have ever had in class. Being a part of this experiment fuelled my curiosity for science, and helped clarify some of my goals and ambitions, including my plans to pursue a graduate degree.”