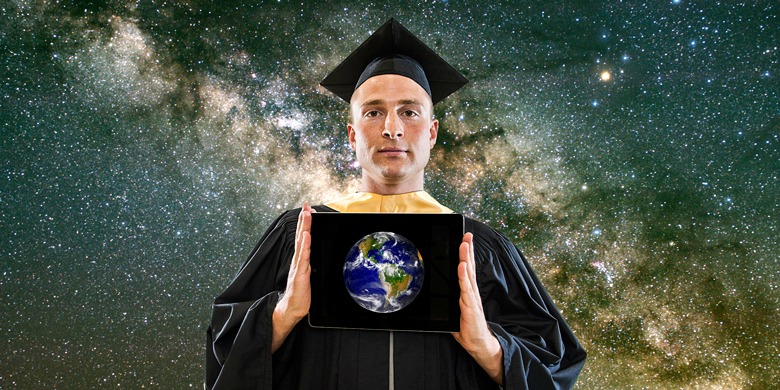 (Edmonton) When Taylor Robertson was considering courses to help round out his bachelor of science degree, he came across a University of Alberta offering called Science Citizenship.

Robertson says he’s glad he signed on for Science 299. As he prepares for his U of A spring convocation ceremony June 12, he recalls the course as a reality check.

“Solving problems with science is just the first challenge,” he said. “Then you take your solution into the real world of governments, corporations, policy-makers and the public and you’ve got to successfully communicate your science to everybody to make it a reality.”

Robertson plans to use his BSc with a specialty in physics to launch a career in space technology. He’s aware that the high costs and high risks of space exploration—steering a project from laboratory to launch pad—requires skills he was introduced to in Science Citizenship.

The course requires students to take a global issue, research a science solution and write a proposal that tackles the problem on a local scale.

Science Citizenship was created by U of A chemistry professor Glen Loppnow. Initially the course was for third-year chemistry students, then it became part of the Science 100 program and now it’s available for all science students from second year up. Loppnow says the students have always got a lot out of the course.

“I’m still amazed by the creativity of the student presentations,” he said. “They present before the whole U of A community; it’s a big deal.”

Twelve students took Science 299 this year. They broke into four groups interested in social issues as varied as intimate-partner violence to science education and battery recycling.

Robertson and two other students proposed a water conservation program for Alberta that involves recycling grey water for toilet flushing. Toilet flushing accounts for 35 to 50 per cent of water consumption—and Robertson says many residents could cut their consumption of fresh clean water nearly in half.

Robertson and his teammates worked out the science and drafted legislation required to make the systems legal. They hope to present it to the Alberta government next year.

“What I took away was the importance of researching all aspects of the problem,” said Robertson. “Not only the science, but the institutional and economic barriers that stand in the way of creating change.”

Robertson says he hopes to put the lessons he learned in Science Citizenship to use helping to push space exploration “beyond the immensely small corner we have seen.”