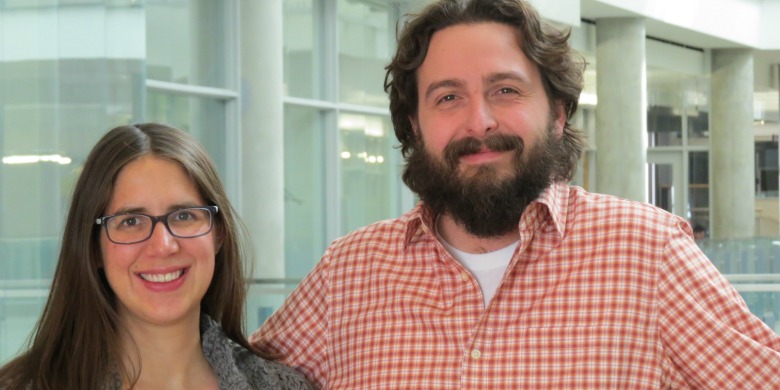 (Edmonton) Valentine’s Day got a little bit sweeter for the husband-and-wife team of John P. Davis and Juli Gibbs-Davis. Both have received a Sloan Research Fellowship, the University of Alberta’s first in over 40 years.

Nominated by their peers and chosen by a distinguished panel of senior scholars, the Sloan Research Fellows represent the next generation of leaders in the natural sciences, economics and mathematics. The two-year, $50,000 fellowships are awarded yearly to 126 researchers throughout North America in recognition of their distinguished performance and potential to make substantial contributions to their field. Sloan Research Fellows have gone on to win 38 Nobel prizes, 14 Fields Medals in mathematics, and eight John Bates Clark awards in economics.

Gibbs-Davis found out about the Sloan results when her husband called to say he had won a fellowship. “My first thought was, ‘That's fantastic!’ My second thought was, ‘I didn't win one.’ He said they'd emailed, so I checked my email while he was on the phone, and sure enough, I had received one too. Both of us winning in the same year is seriously very, very cool.”

“I was thrilled to learn that two of our researchers have been named 2013 Sloan Research Fellows,” said U of A President Indira Samarasekera. “This recognition represents the calibre of the research performed at the University of Alberta. My congratulations to our Sloan Research Fellows on this exceptional accomplishment so early into their promising young careers.”

Gibbs-Davis came to the U of A in 2008 as an assistant professor in chemistry. Her research focuses on the interplay between understanding and controlling molecular recognition, research that has led to exciting discoveries in areas ranging from fundamental surface science to DNA detection. “We are using molecular recognition to achieve new functions that are promising in multi-component drug delivery,” explained Gibbs-Davis.

She recently won a $100,000 grant from the Canadian Rising Stars in Global Health Grand Challenges to develop a system to detect unique DNA sequences associated with a host of infectious bacteria like TB and malaria, making diagnosis cheap and easy to administer.

Davis, an assistant professor in physics, studies low-temperature physics. After a two-year post-doc with U of A’s Mark Freeman, Davis joined the condensed matter physics research group as a faculty member. “Since then, the Faculty of Science has been fantastic to me,” he said, “constructing an amazing lab space for me and giving me the startup funding I needed to get my lab up and running.” And what a lab it is.

Built in the sub-basement of the Centennial Centre for Interdisciplinary Science, the lab will have the distinction of being the coldest laboratory in Canada when it is up and running in March: -273 C.

“That kind of temperature gives us access to research in superconductivity, which is the transmission of electric current with absolutely no resistance,” Davis said, explaining that one goal of superconductivity experiments is to find materials that one day could be made to work with zero electrical resistance at more practical temperatures.

"John and Juli's success makes public something that we already knew: the Faculty of Science continues to hire researchers with outstanding potential,” said Jonathan Schaeffer, dean of science. “We are delighted that the international community recognizes their impressive achievements."

The Sloan Foundation believes that a carefully reasoned and systematic understanding of the forces of nature and society, when applied inventively and wisely, can lead to a better world for all. It is interested in projects that it expects will result in a strong benefit to society, and for which funding from the private sector, the government or other foundations is not widely available.

“Many of the finest and most influential scientists in North America have been Sloan Fellows and it is a tremendous honour to be included with this group,” commented Gibbs-Davis, whose PhD and post-doc supervisors were Sloan Research Fellowship recipients. “I am also really proud to represent this university and my department. I tell my students that you can do anything you can think of here, we have such amazing resources.”

Davis, whose graduate supervisor was also a Sloan Research Fellow, echoes his spouse’s sentiments. “In large part, this fellowship is simply a consequence of those faculty who have trained and mentored me—my graduate advisor William P. Halperin, my post-doc advisor Mark Freeman and my faculty mentor John Beamish—and the wonderful folks working with me in the lab.”

And although it seems 2013 couldn’t get much better for this scientific powerhouse, they are expecting their first child this summer.