Growing up in China, Xian-En Zhang had a boundless curiosity. As a visionary researcher, he has dedicated his career to bringing science beyond borders. 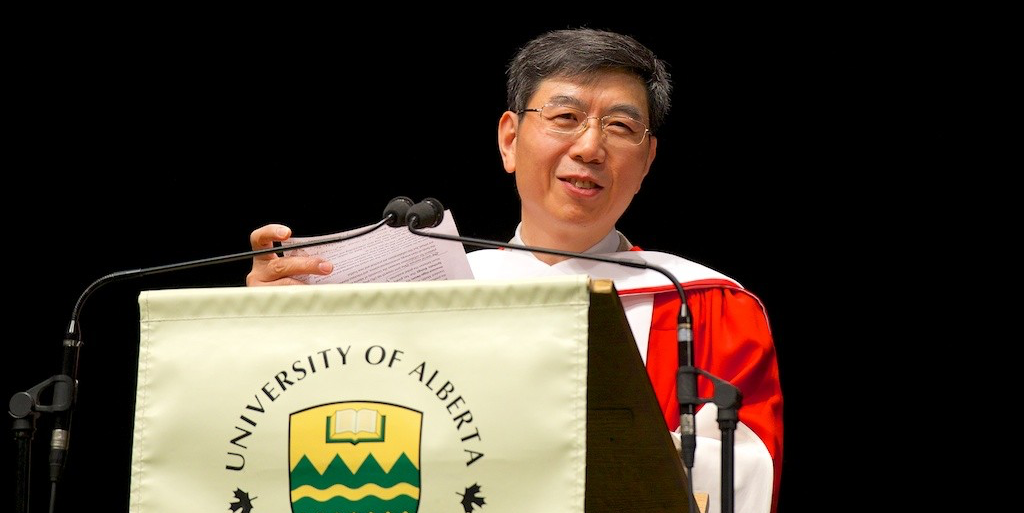 (Edmonton) As a child growing up in China, Xian-En Zhang was curious about everything: where does surging river water come from? Why is the sunrise red? What makes stars shine?

His sense of discovery never waned, and even though his desire to become a scientist was delayed by circumstance, Zhang, now a visionary researcher in China, didn’t let go of his dream.

That was the advice he gave to University of Alberta Faculty of Science graduates as he accepted an honorary doctor of science degree June 4.

“The first thought I would like to leave with you today is, if you have a dream, never give up on it.”

Growing up in the river city of Wuhan, Zhang was curious about the natural phenomena of the physical world and was always asking questions. Guided by his older brother, he read a book titled A Hundred Thousand Whys, and found answers for most of his basic questions. “As a consequence, the more I read the book, the more I liked to read.” Eventually his curiosity about nature turned into a dream to become a scientist.

But the young man, though encouraged to keep reading by a few high-school teachers, instead went to the countryside to farm when he graduated 40 years ago. “Due to historical reasons, learning science (at the time) was to some extent regarded as less important.”

One day in 1974, a lunar eclipse occurred. Mystified as to why the moon didn’t disappear but instead “looked like a red lantern in the night sky,” Zhang wrote to the Chinese Academy of Sciences to seek an answer. The unsigned letter he got back explaining the phenomenon “once again lit my dream of becoming a scientist.”

A decade later, at age 29, Zhang started graduate studies and has since excelled in interdisciplinary science, particularly in the fields of biochemistry and microbiology. His work in biosensors has been instrumental in developing new tools for studying viruses and gaining deeper understanding of tuberculosis.

His second message to graduates was that science has no borders, a belief demonstrated by a career dedicated to advocating international co-operation including fostering collaborations between scientists in China and Alberta.

In 2002 he was appointed director general for basic research in China’s science and technology ministry and developed an enthusiasm for international collaborations, which he sees as important to solving the world’s most pressing problems.

“Today, while we enjoy the prosperity of modern society, we are also dealing with big challenges: global warming, energy and resources depletion, disease epidemics, environmental destruction. To find scientific solutions for these major problems, we need co-operation and to work together.”

During Zhang’s 11 years serving with the Ministry of Science and Technology of China, he implemented a joint research laboratories program that sees U of A and China researchers working together on key areas of research including clean energy, environmental technology, biomedical sciences and infectious diseases. “The labs are virtual, but the collaborations are practical—and now fruitful,” he said.

Zhang is also credited for China’s science strategy in supporting growth in basic research and has co-ordinated the promotion of multilateral research projects internationally.

Receiving an honorary degree from the U of A is particularly special because Zhang had hoped to study here 30 years ago while taking part in a joint research project. “Now my dream has become true.”

He urged the graduates to celebrate their degrees and the futures that await them as scientists.

“Science is a key that can unlock the universe and our future, and therefore the commonwealth of mankind. Please go forward, never give up, don’t stop, enjoy research, enjoy your life and contribute to society. That is what I wish for you and for us all.”