U of A scientists part of research team that used X-ray telescope to measure mass and diameter of super-dense neutron star 1,100 light-years from Earth. 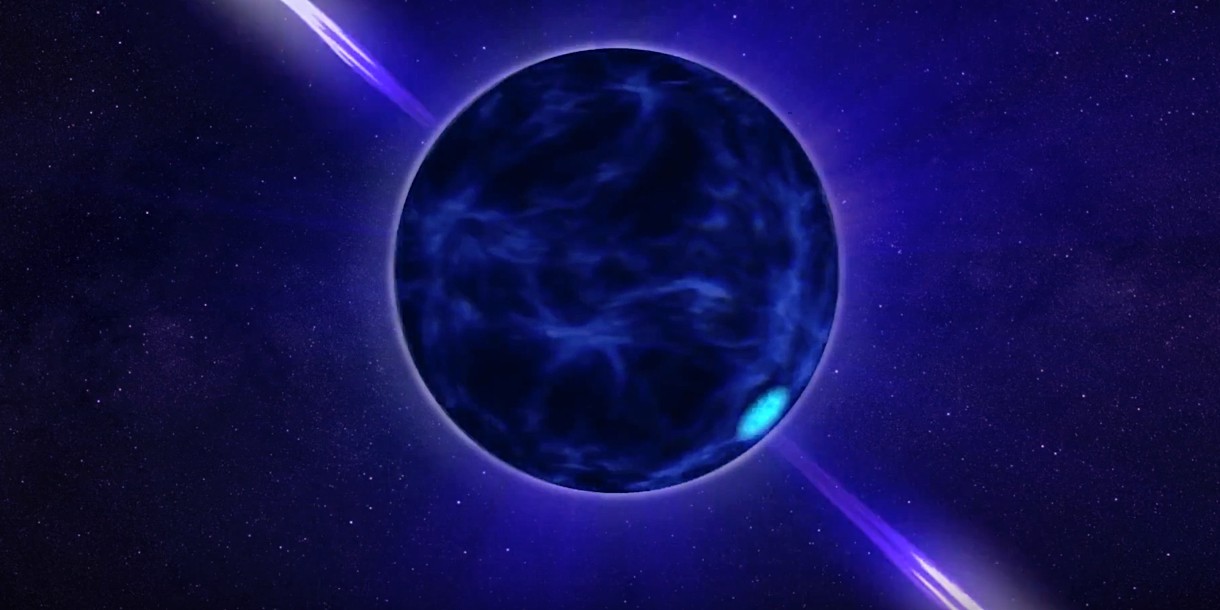 New research has yielded the most precise measurements ever taken of a pulsar—the super-dense, rapidly spinning remains of a supernova. (Image: NASA)

Researchers have made the first precise measurements of a pulsar—the dense, whirling remains of an exploded star—thanks partly to a collaboration with University of Alberta scientists.

U of A astrophysicist Sharon Morsink played a key role in the project, as part of the team that developed the theoretical framework and software used to translate the properties of the pulsar from data collected by NASA’s Neutron star Interior Composition Explorer (NICER) X-ray telescope.

“NICER is measuring the X-rays emanating from a pulsar roughly the size of Edmonton from a distance of 1,100 light-years,” said Morsink. “The distances involved give us just a single pixel of data—which we need to then interpret into an understanding of the pulsar itself.”

The pulsar, J0030+0451, is a neutron star that spins 205 times each second, with hot spots at the locations on its surface where there is a strong magnetic field.

“As it spins, we see the X-ray measurements get brighter and dimmer periodically as the hot spots rotate in and out of our view,” explained Morsink. “With just one pixel, it is a difficult computational problem to use this data to get useful information about the star's properties.”

Pulsar J0030+0451, located 1,100 light-years away in the constellation Pisces, now has the most precise and reliable size measurement of any pulsar to date.(Video: NASA’s Goddard Space Flight Center)

Despite the challenge, the scientists managed to provide the first precise measurement of the neutron star’s mass and diameter—as well as some surprising findings.

“In particular, we found that the star is a sphere with a diameter that is just 26 kilometres across, but weighs about one and a half times more than our sun,” said Morsink.

“We also found that the magnetic hot spots are all on one side of the star, suggesting a magnetic field similar to a horseshoe magnet—a totally unexpected result that, at the moment, we don’t yet understand the reasons for.”

The research was published today in several papers in The Astrophysical Journal Letters.