U of A researchers focus on animal learning to understand why bears frequent railway tracks in national parks and help reduce fatal collisions. 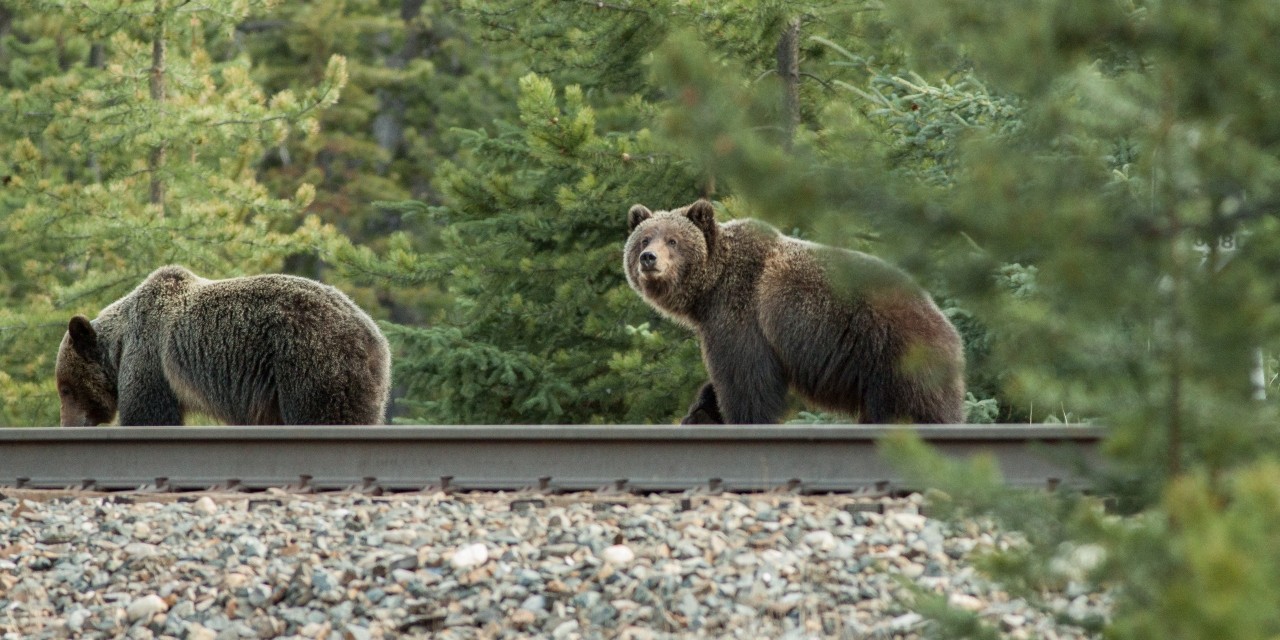 U of A researchers found that grizzly bears have learned to hang around railway tracks in Banff National Park for food and easier travel, so they are testing a warning device that teaches the bears to get out of the way of oncoming trains. (Photo: Neils de Nijs)

Researchers at the University of Alberta are working on a warning system aimed at teaching grizzly bears that frequent railway tracks to get out of the way of oncoming trains.

The device uses a two-part system to detect an approaching train and deploy a warning consisting of a ringing bell and a flashing light—similar to signals used at railway crossings for people.

“There are more trains, and these trains are travelling faster than ever before,” explained U of A biologist Colleen Cassady St. Clair, who led a recent study published in Philosophical Transactions of the Royal Society of London. “The possibility of collisions between wildlife and trains is increasing.”

In Banff National Park, where train strikes are a leading cause of death for grizzlies, wildlife managers had hoped research could determine why bears use the train tracks and suggest ways to prevent it. Over the last eight years, St. Clair’s research group determined that many factors attract bears, from spilled grain to concentrated deer and elk populations, to berries that grow near tracks, to the convenient corridor the tracks provide through the landscape.

Their findings made it obvious that keeping bears off the tracks altogether would be extremely difficult.

For St. Clair, another thing became clear—it isn’t possible to solve this problem without working with the bears themselves.

“The issue isn’t keeping wildlife away from the tracks—it is keeping animals from being struck by trains,” she said. “So we wondered, what if we shifted focus? What if we tried to teach bears to avoid the trains themselves, giving them enough time to get safely out of the way?”

Getting bears out of harm’s way

With this in mind, PhD student Jonathan Backs, co-supervised by St. Clair and engineering professor John Nychka, developed the warning system to alert bears when trains are approaching, giving them more time to move out of the way.

The devices were installed in four areas where wildlife-train collisions occurred in the past to test the ability of the device to change animal behaviour.

Preliminary results suggest the devices cause animals near tracks to avoid approaching trains several seconds sooner than they do when the device isn’t activated.

But St. Clair cautioned that even if the system were adopted, it wouldn’t solve the problem for every bear.

“Warning systems would only be installed at high-risk locations, and it would take time for resident animals to learn to associate them with approaching trains,” she explained. “But our hope is that this type of solution would be most beneficial to the animals that live in that area.”

Though the approach of focusing on animal learning is relatively new, it is growing in popularity and interest among ecologists, who are using similar learning by association to teach animals to avoid people or particular sources of food.

“We might try more actively to teach animals to avoid areas of human development and related effects that are damaging to them, while accepting that we share space with other species,” said St. Clair.

“Our human activities do get in their way. I think animal learning could be a much bigger part of the solution for these problems.”