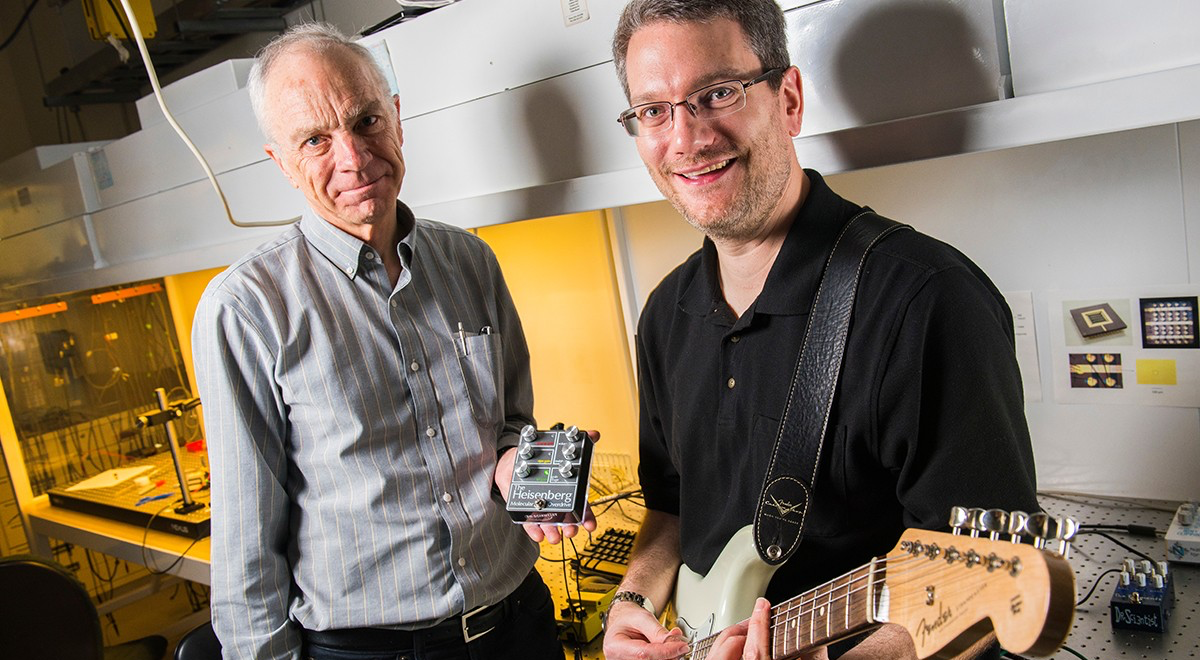 What business do nanochemists have creating products for rock guitarists? A potential $100 million worth, as it turns out.

A team out of the University of Alberta and the National Research Council of Canada (NRC) has created the first commercial application of molecular electronics in the form of electronic junctions in guitar pedals, helping musicians improve their sound quality and harmonics in the process.

“The guitar story is just a small part of the big picture,” explained U of A chemistry professor Rick McCreery.

The bigger picture is molecular electronics, something that first appeared on the scientific scene in the late 1990s.

“The two main questions we consider: How do electrons move through molecules when the latter act as circuit elements, and what can we do with molecules that we can’t do with silicon, the standard material used in most consumer electronics? The guitar story is important because it demonstrates that a molecular device is practical and can do something that is very difficult with silicon.”

Along with his colleague Adam Bergren, NRC senior research officer and former U of A post-doctoral fellow, McCreery and his team created a device only a few molecules in thickness, that—in this particular application—creates a warmer sound for electric guitarists. The inspiration for the application of their molecular junctions came from Bergren, an amateur guitarist, who observed that musicians typically don’t like the “sound” provided by standard amplifiers using silicon electronics.

“To put it in musical terms, the sound silicon provides lacks warmth or brilliance,” explained McCreery. “For that reason, all the best amplifiers today have vacuum tubes, but these are expensive because they are so rare, and have limited lifetimes.”

And so, most guitarists use distortion pedals that also contain silicon components to enrich the sound, resulting in a market of $100 million annually in the U.S.

Though it’s not a huge market, it’s certainly nothing to sneeze at, and McCreery and Bergren are hoping to cash in with their new business, Nanolog Audio. With a proven—and patented—product, McCreery said Nanolog Audio is tech transfer “made in heaven,” since initial product development is complete and there is an established market. The pair are hoping to propel the silicon-dominated guitar pedal market into the future of molecular electronics.

“Silicon is silicon,” said McCreery, and it has certain electronic properties that are difficult to modify. There are thousands of molecules that can be incorporated in molecular electronic devices, with a wide range of properties and electronic characteristics. They permit the “sound” to be tailored by variations in thickness and molecular structure, in a molecular layer only two to four nanometres in thickness.

McCreery explained that, until now, the common challenge with molecular electronics worldwide has been stability.

“Everybody makes these fancy, tiny, expensive laboratory gizmos, and they’re cool—neat physics and neat chemistry—but they’re very difficult to make practical. We don’t want to make fragile devices. We want to make manufacturable devices that are tolerant of the real world. I’ve always had the attitude that I want this thing to be tough and practical.”

And tough it is. McCreery and Bergren’s molecular junctions are made with carbon-carbon bonds, which are among the strongest in chemistry. The pair have been running a device in their lab continuously for eight months, representing 30 billion cycles without complications or failure. That’s a lot of licks on an electric guitar.

“Our interest goes way beyond guitars, but the guitars demonstrate the practical viability of molecular electronics. We are currently looking hard at other applications besides audio, where molecular devices may provide major advantages. Guitars are just the tip of the iceberg,” said McCreery.