Seeing opportunity in the unexpected 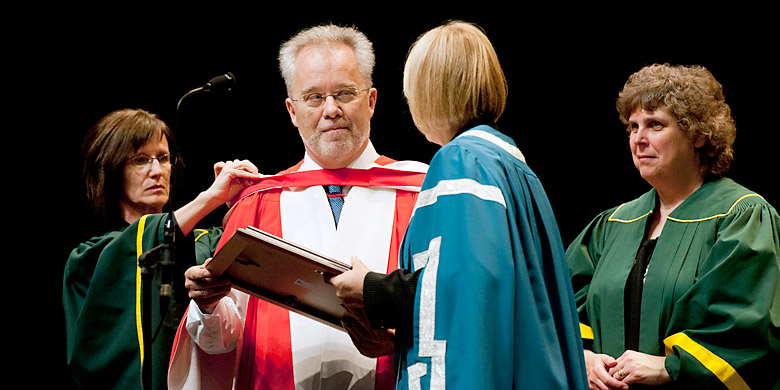 (Edmonton) Donald Bruce Dingwell, who received an honorary doctor of science degree from the University of Alberta June 6, believes in internationalism and mobility of young researchers—and he’s certainly a living example of that.

From there, Dingwell’s base shifted to the newly founded Bavarian Geo-institute in Germany, and in 2000, he was named chair in mineralogy and petrology at the Ludwig-Maximilians-University of Munich.

Dingwell is known for innovation in volcanology research. His work has expanded our understanding of why volcanoes explode.

In his commencement speech, Dingwell told the audience that the world’s best researchers accept that there will be failures. Dingwell summed up his career in science this way:

“Someone once told me the difference between engineers and scientists is that scientists love surprises, engineers hate them. So be it. I find it one of the truest statements I ever heard. I never met a top scientist who was not inspired by a novel yet reproducible result. The most excellent plans for research do not necessarily correlate well with the most excellent of results. The difference is serendipity. The difference contains the unexpected. And most importantly, the difference consists of recognizing the significance of the unexpected result…. Graduates of 2012, be prepared for the unexpected. It is your friend, but only if you can recognize the fact.”

Seeing opportunity in the unexpected
Newsroom