Seeking justice for victims of violence against women 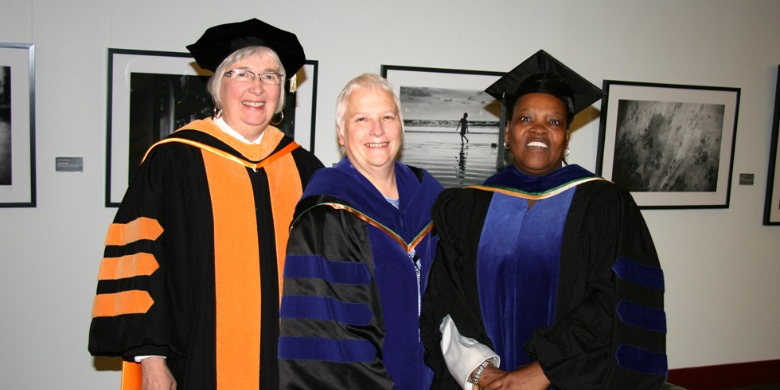 (Edmonton) Born in South Africa during the 1960s, Shirley Mogale faced apartheid and racial segregation as an everyday part of her life. But they never stopped her from dreaming about going to school.

Growing up in Limpopo, the northernmost province in South Africa, Mogale witnessed how Black African women experienced numerous forms of violence against them, and she knew she wanted that to change. She received her bachelor’s and master’s degrees in nursing from the University of Pretoria in South Africa and worked extensively in community nursing.

In 2001, one year before receiving her master’s degree, she co-founded a non-governmental organization in the rural community where she grew up. “I realized the pressing need to focus my work on violence against women,” she said.

The encounters Mogale had with the criminal justice system when she accompanied female victims of violence from her NGO to the courts raised many questions that she wanted answered.

“I was puzzled by the way the cases were handled in courts, irrespective of the new and progressive legislation in South Africa,” she said. “I came to realize that there was minimal—if any—knowledge about the culture of prosecuting cases with violence against women.”

That realization ignited her desire for doctoral studies, and she knew what she wanted to research.

A long journey, a test of time

With the support of her husband and children, Mogale moved more than 15,000 kilometres to Edmonton. “I could never have lifted my wings and flown away from Africa if it were not for my husband,” she noted with a smile. “He always says ‘I do’ to my unusual endeavours.”

Alone in a new country with only her daughter (her two sons remained behind in South Africa with their father), Mogale joined the U of A’s Faculty of Nursing as a doctoral student in 2007. She quickly found friendship and support from her supervisors, Solina Richter and Kaysi Kushner, from her fellow graduate students and from her professors.

Still, Mogale says, the years that followed were difficult for her. “Obtaining a PhD is a lonely, emotional and painstaking journey that puts your resilience to a test of time.”

But she persevered and spent six years building on the experiences she had with her NGO to create new knowledge that would refine and improve good practice related to prosecution of violence against women. Mogale’s research revealed that the cultural scene in which prosecution of violence against women occurs represents power, while at the same time inducing fear in the victims.

Her dissertation, “An Exploration of the Culture of Prosecution of Violence Against Women in South African Courts,” revealed that the linguistic patterns employed are value-laden, with an arbitrary prosecution approach that de-centres women.

The cultural processes involved in prosecution were found to be insensitive, despite guiding laws that have endorsed sources of evidence, such as the medico-legal form and the use of intermediary facilities, intended to make prosecution of violence against women victim-friendly.

Mogale’s research also noted differences in the definition itself, based on the historical and political era in which prosecutors completed their education.

From the front line to faculty collaboration

Mogale says her findings are important in nursing. “Nurses contribute to the front-line reporting of violence against women, and it is necessary to have improved standards for reporting and documentation at this front line of care, especially in this era of technology.”

For example, Mogale found that diagnosis and treatment for victims was recorded on the medico-legal forms, but they weren't completed for testimonial and legal purposes as expected by the criminal justice system.

“It will be of particular importance for nurses to revisit the existing health screening, identification, care and reporting protocols in these situations, as appropriate reporting improves the quality of care and establishes connections on health issues that are related to violence.”

Mogale believes it’s important to think beyond the boundaries of nursing and health care, to consider interdisciplinary programs in which faculties of health studies collaborate with other faculties involved in production of knowledge on victim care and management.

“I wish that I could have embarked on my doctoral study earlier,” she said. “If I could have gained a better understanding of what was and is happening in the criminal justice system, perhaps I could have affected the prosecution culture and altered how the victims’ cases were handled.”

“My dissertation is dedicated to women who are the survivors of violence worldwide and to those who died while their cases were still under the jurisdiction of state institutions. Wherever these women are, I salute their suffering and unfortunate deaths with pride as they have situated the status of African women on a pedestal of hope.”

Seeking justice for victims of violence against women
Newsroom