This is not simply automating media monitoring. We are characterizing conversations in a meaningful way to facilitate deeper understanding.

Psychology and engineering researchers team up to explore the language of energy. 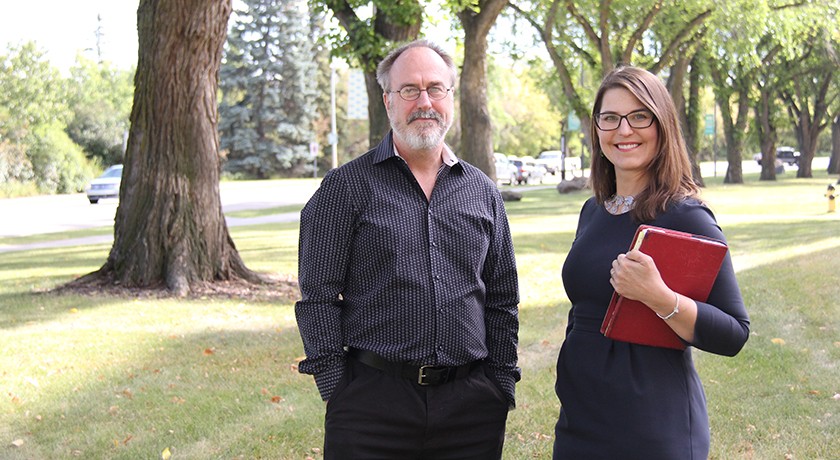 A psychology professor and an engineering professor meet at a party.

It sounds like the beginning of a joke, but during this particular chance encounter, the two professors discovered they have similar interests in language, persuasion, and the creation of meaning.

“You don’t often meet people at parties who are doing textual analysis,” says Chris Westbury, a professor in the Faculty of Science’s Department of Psychology who specializes in language and semantics.

“Most people run away when you start talking about co-occurrence modelling,” echoes Lianne Lefsrud, a triple U of A alumna (in environmental engineering and strategic management and organization) and new assistant professor in the Faculty of Engineering.

Now Westbury and Lefsrud are working together on their common research interests to guide the Alberta Chamber of Resources (ACR) in better understanding public conversations by examining how the use and combination of certain words affects perception of meaning. (Think “oilsands” versus “tarsands” and the connotations associated with each term.) The ACR—representing 174 member companies from the mining, energy and forestry sectors—is focused on Alberta’s “triple future”: not only economics, but also environmental and social impacts—the latter two of which Westbury and Lefsrud see as closely tied to their research.

Listening in on a global conversation

“How can you listen to big public conversations?” asks Lefsrud. “You can hold a focus group, but you only listen to the people in that focus group. Or you can do a survey, but you only hear from the people you’re surveying. Conversations about Alberta’s resource development have expanded beyond niche conversations in Alberta to Toronto, Washington, DC, London, and worldwide. How can we understand what is activist rhetoric versus general public sentiment?”

To that end, Westbury and Lefsrud teamed up this summer with their colleague Geoff Hollis and two psychology students—Janel Comeau and Jeff Keith—to analyze nearly half a million unique newspaper articles from 2004 to present, using custom-written software. The team is also planning to examine the use of Facebook and Twitter by looking at how word frequencies change over time on social media.

“We are analyzing how often words appear in the same article and how this changes across time,” says Westbury, adding that the group is focusing on 200 keywords derived in consultation with industry experts. “For example, how often when you see the word ‘oil’ do you also see the word ‘dirty’?”

‘Oilsands’ and the spillover effect

“Oil and tar were considered descriptive synonyms until the 1970s and ‘80s,” says Lefsrud. “As it became more valuable, companies and the government very consciously started calling them ‘oilsands’ rather than ‘tarsands.’ When tar was reintroduced in 2006–2007, ‘tarsands’ took on a newly pejorative meaning. It was dirty and sticky and black and death.

“Our results show that ‘tarsands’ is much more emotionally negative than the more neutral ‘oilsands,’” says Lefsrud. “Our research demonstrates that these terms started out fairly close on what we call the ‘negativity index,’ our measure of negative emotional sentiment. Then they split. The interesting thing is that it looks like there’s a spillover effect within about an eight-month window. As ‘tarsands’ acquires negative meaning, the negativity spills over, and ‘oilsands’ becomes more negative.”

Predicting how the conversation will change

Lefsrud explains that the goal is to provide tools for companies to better understand public conversation. “The world has changed,” she says. “It’s no longer exclusively an economics discussion, so it’s not only changing how these organizations talk about what they’re doing, but also how they create their strategic priorities. This is not a PR campaign. It’s more fundamental than that.”

Westbury and Lefsrud see the possibility of their research being applied beyond resource development to other controversial issues—energy, climate change, and stem cell research, for example. “We can track controversial issues to see how and where they’ve changed through time,” says Lefsrud.

They also hope to take their research one step further to predict forthcoming trends in public perception based on language being used. “Our end goal is to try to be able to predict in advance what changes might be about to occur or to find signs that will tell us that things are about to change,” says Westbury. “Can we predict that people are going to start speaking negatively about a particular topic?

“We’ve defined a lot of measures that tell us about the characteristics of text, how things change across time and within different interest groups. We have ways of characterizing large blocks of text now. This is not simply automating media monitoring. It characterizes the conversations in a meaningful way to facilitate deeper understanding.”

To arrive at that understanding, the researchers use a computational model that characterizes the emotional tone of a word from analyzing its context of use (co-occurrence modelling), somewhat like how you might come to understand the meaning of an unfamiliar word from repeatedly hearing how it is used. They search through this and their other measures to characterize changes across time in the public conversation about Alberta’s resources.

Westbury and Lefsrud are actively recruiting students to help them this September to conclude their research before presenting their initial results to the Alberta Chamber of Resources on Oct. 1.