Setting the Stage for National and International Events

Campus & Community Recreation's South Campus Operations staff work behind the scenes to make sure all event elements are met with precise detail and execution to create a venue where athletes have the best possible environment to achieve greatness. 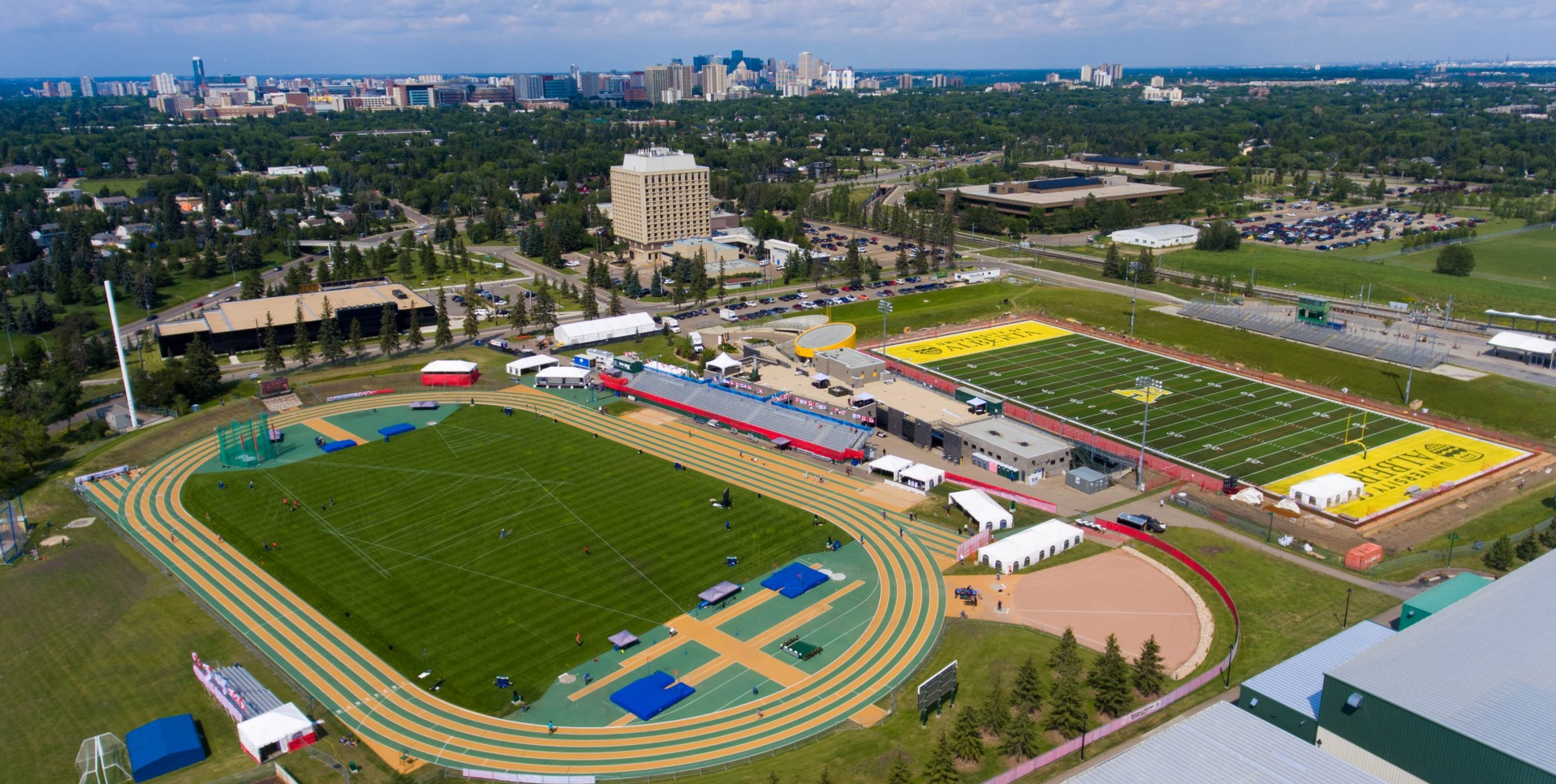 The lead-up and anticipation to the 2016 Track and Field Canadian Champions and Rio Selection Trials hit its peak on July 6th when coaches, officials and athletes met with the media. With phrases like, “one of the best Olympic trials in history” and fans seeing “more medals than we’ve done since the 1996 Olympics” being heard and reported on, Canadians got the sense that the July 7th – 10th event was going to be a special one.

With over 1,100 athletes registered — making this event the largest Olympic Trials ever in Canada — looking to fill what will eventually be a 65-person team, the stakes were high for the Olympic hopefuls. Every little step and movement could be the difference between qualifying and moving one step closer to their dreams, or going home disappointed.

Foote Field on the University of Alberta’s South Campus was the gracious host of the 2016 Track and Field Canadian Champions and Rio Selection Trials this past weekend, and understanding the implications of the event for the athletes was top of mind for Rob Stewart, South Campus Events & Foote Field Manager.  Preparing the facility, which was originally built for the 2001 International Association of Athletics Federations World Championships, to give athletes the best chance of success was top priority for the entire facility staff.

“We spent a lot of time working with the event organizers — TrackTown Canada, who liaise with Athletics Canada — planning and ensuring that the venue was set-up to meet the needs of the athletes. While we try to provide a positive experience for spectators, coaches, officials and volunteers, the primary focus is on the athlete to ensure the best possible environment for them to have the opportunity to achieve their best results.”

For weeks leading up to the event, Rob and the stellar Operations team led by Bruce Bourguignon and Kyle McMahon, which also includes Dean Fargey, Shaun Arkison, Corey Peterson, Randy Shaw and many part time staff, meticulously plot out and arrange all the elements to make sure the track, pole vault and high jump areas, the triple and long jump pits and throwing areas for shotput, javelin and discus are in pristine condition for the Olympic hopefuls. Cutting grass, line painting and reviewing all items such as hammer cages, starting blocks, long and triple jump boards and hurdles are all in good working orders are just few of the tasks the team carefully oversees leading up to and during the event.

The team puts in long hours during this time. Shifts start at 6:00 am, sometimes earlier, with the last shift ending well past midnight.

“We are all very passionate about the work we do here at Foote Field. As part of the Faculty of Physical Education and Recreation, Campus & Community Recreation and home to many of the University of Alberta Golden Bear and Pandas varsity teams, we understand and respect the needs for athletic events such as the 2016 Track and Field Championships and Rio Selection Trials,” says Stewart. “Working diligently for weeks in advance and putting in long hours the week leading up to and during the event is required and met with eagerness by our entire team so we can ensure a well-run event. We take great pride in being able to make events like this come to life.”

The days leading up to the event are very busy, as are the event days themselves, especially when there is inclement weather as was experienced over the weekend. Operations staff were kept busy putting covers on and off the jumping mats, as well as pumping water out of competition areas.

The team also works hard to ensure all event elements are met with the same detail and dedication as the athletic components, including the “less glamorous details”.

“We organize cleaning during the event and overnight; coordinate food and beverage service throughout the entire weekend; work with organizers to coordinate around-the-clock security; and work with the Faculty’s IT department to ensure the IT needs for the media are met and the event is successfully live-streamed.”

Further to hosting this event, the Saville Community Sports Centre is not only open to the public for use of the tennis courts and fitness and gymnastics facility, the Edmonton Grads International Classic: Canada vs. China event took place in the Competition Gymnasium. With about 7,000 people on South Campus over the weekend, parking was just another item on the task list for the group.

“We are a very community-minded facility,” explains Stewart. “We work with the University of Alberta Parking Services to make sure we can accommodate our athletes, coaching staffs and spectators so it doesn’t impact the surrounding communities. We also periodically take sound measurements to ensure that the events comply with the City of Edmonton’s noise bylaw and that we adhere to the Good Neighbour policy.”

The results of the past weekend attest to the hard work, attention to detail and professionalism Rob and his team exude. At stake for the athletes were berths to the 2016 Summer Olympic Games in Rio de Janeiro, Brazil. A total of 65 athletes earned the right to represent Canada at the 2016 Rio Games, including 2015 World Champion Shawn Barber (pole vault), 2012 Olympic bronze medalist Derek Drouin (high jump) and 2015 World Champion sprinter Andre De Grasse. Carline Muir and Ingrid Ruys, both of whom have connections to the U of A, were also among those named to Canada’s 2016 Olympic squad. As a rookie with the Pandas in 2006, Muir set a school record, that still stands today, in the women’s national championship 300m race, stopping the clock at 38.51, while also winning three national championship gold medals. In Rio she will run in the 400m and on Canada’s 4 x 400m relay team. Ruys, who calls Sherwood Park home, coached with the Pandas track and field program for a number of years, and has been a coach and manager with numerous national teams and programs in her career. In 2016 she will serve as a technical manager for the Canadian team in Rio.

Full results can be found here

With this being the second year in a two-year bid, the Faculty of Physical Education and Recreation and the University of Alberta hope the success of this event will open the doors to future TrackTown events.

“Supporting people being active is at the heart of Campus & Community Recreation and the Faculty Physical Education and Recreation,” noted Stewart. “Being able to not only host events like the Track and Field Championships and Rio trials, but helping young athletes get one step closer to their Olympic dreams makes all the hard work and long hours very much worth it.”

The Faculty of Physical Education and Recreation, Campus & Community Recreation and the Golden Bears and Pandas Athletics all congratulate the athletes and staff who are well on their way to the Road to Rio.

Setting the Stage for National and International Events