Setting women up for success in Alberta's oil and gas sector 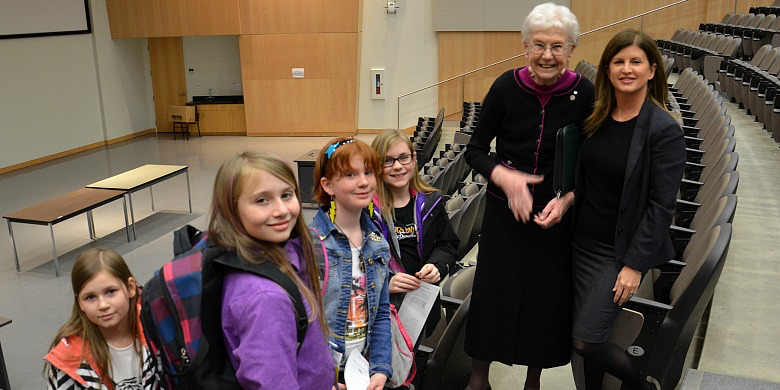 (Edmonton) The Canadian Centre for Women in Science, Engineering, Trades and Technology (WinSETT Centre), led by the University of Alberta’s Margaret-Ann Armour, is receiving $250,000 to help retain and advance female scientists and engineers working in the oil and gas sector across Alberta.

Rona Ambrose, minister of health and regional minister for northern Alberta, on behalf of K. Kellie Leitch, minister of labour and minister of status of women, was at the U of A Feb. 18 to announce the Government of Canada’s support for the WinSETT project.

Armour, assistant dean of diversity in the Faculty of Science, has been nationally recognized for her work to support women in science for more than 30 years. She says this national outreach and development program will not only help women find their way in leadership roles in Alberta, but will also reach women across Canada.

“The WinSETT programs are a natural outgrowth of WISEST (Women in Scholarship, Engineering, Science and Technology), which began at the U of A in 1982 to encourage women to study science. And with so many women now choosing science—from 30 per cent in 1982 to 53 per cent now—the next logical step is to support them as they make their way into leadership roles in the field,” said Armour.

Engineered for broad impact, the integrative WinSETT program is nationally allied with industry, government, academia, associations, unions and NGOs, to examine and address gender- and culture-based issues women face in finding their way in science, engineering and technology fields all across Canada. The research-intensive professional development programs the centre has developed have already been delivered to more than 700 participants through 50 workshops since the centre was established in 2010.

“The workplace is still not particularly inclusive, and research shows that diversity is a business imperative for better decision-making and more robust solutions to problems,” says Armour.

The project's other main activities are to develop a career-awareness program for Aboriginal and immigrant women and girls, and to provide employers with resources and supports to promote diversity within their workplaces.

The national funding will allow the program to

Armour says the project’s outcomes will be shared with post-secondary institutions and stakeholders across the country for the widest impact in addressing the barriers for women in science, engineering and technology.

The WinSETT project was selected through the Government of Canada’s recent call for proposals entitled Opening Doors: Economic Opportunities for Women.