‘Shakespeare’s Dog’ puts spotlight on our deep connection with canines

U of A production of play about the Bard’s best friend takes audience engagement to new level with service and rescue dogs in theatre lobby. 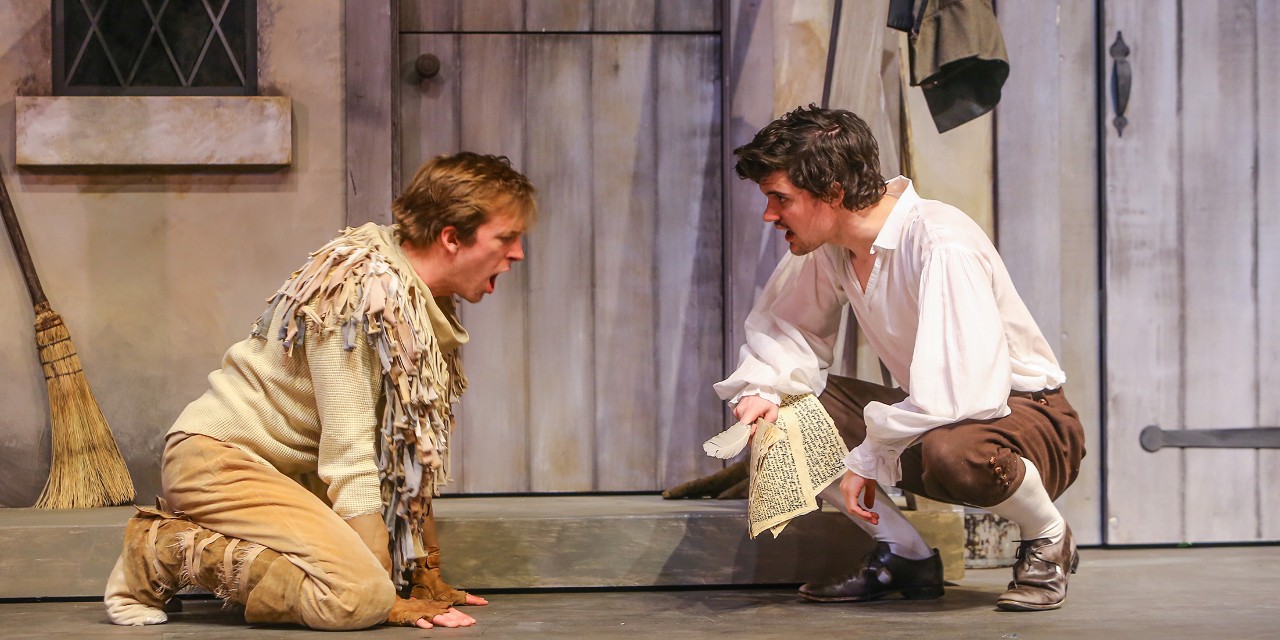 The title character of "Shakespeare's Dog" (played by Braden Butler, left) narrates the story of how the young Bard (played by Kael Wynn, right) became the world's most famous playwright. As part of the U of A Studio Theatre production of the play, service dogs and representatives from rescue organizations in Edmonton will greet audiences in the Timms Centre lobby. (Photo: Ed Ellis)

Almost nothing is known about Shakespeare’s “lost years,” the seven-year period before he arrived in London to begin his legendary career in the theatre.

One of the most daring fictional accounts of that black hole in the Bard’s life is a Canadian play featuring a canine narrator, opening this Friday at the University of Alberta’s Studio Theatre.

In Shakespeare’s Dog, adapted by Rick Chafe from the 1983 novel by Leon Rooke, Shakespeare’s courtship with his future wife, Anne Hathaway, and his struggle with his artistic aspirations are seen through the eyes of his domestic pet, Hooker.

To engage the audience more deeply in the play’s themes, dogs and their advocates are celebrated both before the curtain rises and after it falls.

“It's about connecting the work on the stage to the work in the world around us,” said Charlie Peters, the production’s dramaturge and a fine arts master’s student working on how to apply critical theory in the rehearsal hall. He is tasked with forging a connection between the play’s central theme and the Edmonton community to offer a fuller, more meaningful theatre experience.

Service dogs from Chimo Animal Assisted Wellness and Learning Society will greet people in the lobby before performances on Feb. 7, 8 and 10. Peters has also arranged for representatives from Greater Edmonton Animal Rescue and Second Chance Animal Rescue Society to discuss their work in the Edmonton community.

“The play has a lot to do with human relationships with dogs, so how does that live in Edmonton?” said Peters. “How does what’s happening onstage connect to what's going on in our community right now?”

Engaging audiences beyond the auditorium

Audience engagement is a growing trend in the theatre, embodied in the work of drama theorists such as Lynne Conner who believe appreciation of art is enhanced when attendees have opportunities for shared, social interpretation.

“I think there’s something really profound in this ancient connection human beings have to dogs,” said Peters. “And since street dogs appear in the play, it’s an interesting way to reflect on our own relationship with street dogs—not just with rose-coloured glasses, but in all of its facets, and over time,” he said.

“Shakespeare’s Dog has a lot to do with Elizabethan laws and how they treated street dogs, often cruelly.”

After the Feb. 10 performance, the production team will hold a talk-back session with the audience to shed light on the creative process. And on Feb. 7, 8 and 10, a photo booth in the Timms Centre lobby will invite people to take selfies with Elizabethan costumes and dog props, and share their photos on social media to win tickets to the next Studio Theatre show.

“There will be material to engage with whether or not people are seeing the show,” said Peters.

“It’s all about connecting the play to the larger world.”

Shakespeare’s Dog runs from Feb. 7 to 15 in the Timms Centre for the Arts.

‘Shakespeare’s Dog’ puts spotlight on our deep connection with canines