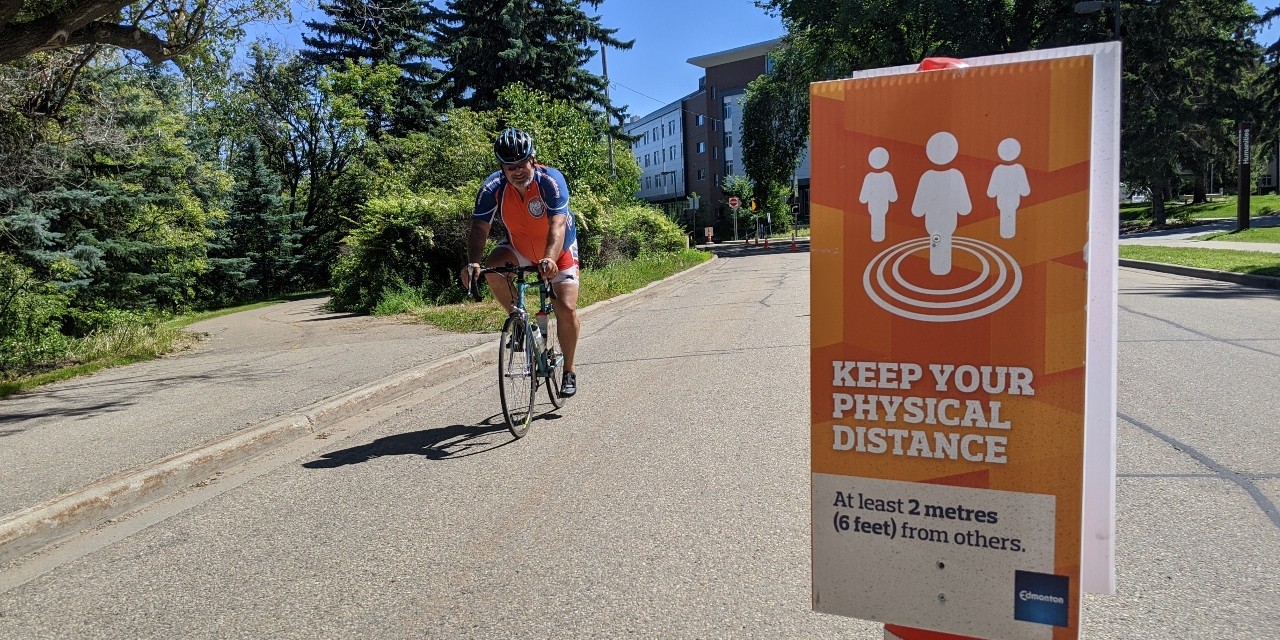 A cyclist rides on an expanded shared-use lane on Saskatchewan Drive bordering the University of Alberta's north campus. Widening the shared-use portion of the street led to a 54.2 per cent reduction in physical distancing violations, according to a new U of A study. (Photo: Sean Townsend)

Making some of Edmonton’s underused roadways available for pedestrians and cyclists cuts physical distancing violations along those routes by up to half, according to a University of Alberta study that may be paving a path for a COVID-19-inspired rethinking of urban design best practices.

In an effort to create space for the public to venture outdoors while maintaining physical distancing requirements, the City of Edmonton expanded walking paths at two locations—Victoria Promenade between 116 Street and 121 Street, and Saskatchewan Drive between 105 Street and 109 Street—where vehicle traffic has dwindled in the wake of the pandemic.

“The idea was to provide an additional active lane to allow for greater opportunity for physical distancing to occur without people having to jaywalk to stay two metres apart,” said U of A transportation engineering professor Karim El-Basyouny, an expert in remote sensing applications in transportation and road safety who led the project to help measure the effectiveness of these new “active lanes.”

He used a near real-time computer monitoring system to assist with analyzing video footage collected from the two sites to measure the effectiveness and safety of the expanded walking paths.

Footage was recorded at the two sites from April 7 to April 13. The expanded walking paths were implemented in both locations on April 9, starting at 1 p.m. Each location has footage of 37 hours before the redesign and 68 hours after. From there, a physical distancing violation was flagged by the software any time groups of road users came within two metres of one another.

El-Basyouny’s team found a reduction of physical distancing violations of 52.4 per cent for Saskatchewan Drive and 24.5 per cent for the Victoria Promenade after the walking paths were expanded.

“Basically, we showed that when you build it, people will use it,” said El-Basyouny, who is also the City of Edmonton’s Urban Traffic Safety Research Chair.

“Not only that, but it's actually contributing positively to compliance with the physical distancing imposed by our health regulators.”

El-Basyouny said people’s instinct to stay on the sidewalk may have kept people closer together, as did the temporary nature of the intervention, which was not much more than traffic cones at the start, and may explain why the usage rate wasn’t higher.

“But as the project progressed, the city was able to go in and retrofit a lot of these locations with better reflective and highly visible traffic controls,” he said. “That will win people over because it contributes significantly to people using these spaces and feeling safe while using them.”

El-Basyouny said studies suggest increased walkability pulls people out of their cars, which not only has health and environmental benefits, but can also have a positive impact on local businesses and the overall livability of a city.

He added it is reasonable to assume the COVID-19 crisis will fundamentally change our relationship with public space. Over the next while, he said, there will be a need to develop new designs and update current standards to live in a post-COVID-19 world.

He said signal lights that turn red on all four approaches, which allows pedestrians to cross in any direction, are an example of a design standard that will probably become more commonplace.

“Those signals facilitate the movement of pedestrians in a way that complies with physical distancing while making it safer and less stressful for pedestrians and drivers alike.”