Neuronal disorders have a profound and constantly growing impact on the quality of life. We foresee that FlicR1 and its future progeny can be used to unravel the functional basis of neuronal disorders in more detail and empower us to develop novel treatments.

Shining a fluorescent light on the brain 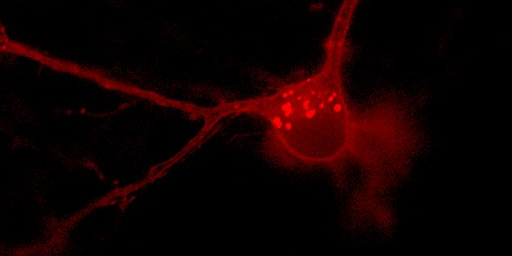 FlicR1 translates the electrical signals between neurons into fluorescence that can be easily measured using conventional widefield fluorescence microscopy.

Led by the University of Alberta with support from colleagues at Harvard and Yale, FlicR1 has sufficient speed and sensitivity to report single action potentials and voltage fluctuations at frequencies up to 100 Hz in single-trial recordings with wide-field microscopy. What does this mean for the average citizen?

“Neuronal disorders have a profound and constantly growing impact on the quality of life,” says lead author Ahmed Abdelfattah, a PhD candidate in the Department of Chemistry at the U of A, of the conditions that range from Alzheimer’s to Zellweger syndrome and everything in between. This new discovery can literally help shine a spotlight on something that has gone wrong in the human brain, which has roughly 80 billion neurons that are organized into elaborate circuits forming the basis of sensory integration, motor co-ordination and higher brain functions.

“These neuronal disorders are not fully understood because of the limited capacity to define their underlying molecular basis,” notes Abdelfattah. “One issue that conspires to limit our understanding is our inability to easily visualize the function and communication within populations of neuronal cells at resolutions of approximately one-thousandth of a millimetre.”

Abdelfattah explains that to achieve functional imaging at this resolution—the equivalent of 100 times smaller than the diameter of a human hair—we need to turn to optical imaging using fluorescent probes that can change their colour or intensity when a particular neuron is activated.

FlicR1 (the new voltage biosensor) successfully translates the electrical signals between neurons into fluorescence that can be easily measured using conventional widefield fluorescence microscopy. “This enables us to ‘see the messages’ as they are relayed through the nervous system,” says Abdelfattah. “More importantly, we can see these messages with FlicR1 at the highest temporal resolution possible—a single action potential or one-thousandth of a second. We foresee that FlicR1 and its future progeny can be used to unravel the functional basis of neuronal disorders in more detail and empower us to develop novel treatments.”

Abdelfattah is working in Robert Campbell’s lab at the U of A, one of only a handful of places in the world where optogenetic tools are being developed. Campbell was awarded the Rutherford Memorial Medal by the Royal Society of Canada in 2015 to recognize his outstanding research in chemistry. He is an international authority on the development and application of fluorescent proteins for live cell imaging.

“A Bright and Fast Red Fluorescent Protein Voltage Indicator that reports Neuronal Activity in Organotypic Brain Slices” was published in the Feb. 24 edition of the Journal of Neuroscience.

Shining a fluorescent light on the brain
Newsroom