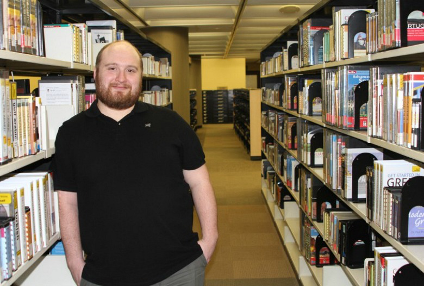 Taking literature beyond the library: “You can be a literature lover anywhere and be a reader anywhere.” says Jason Lee Norman.

In a 140-character world, short fiction is making a big comeback. 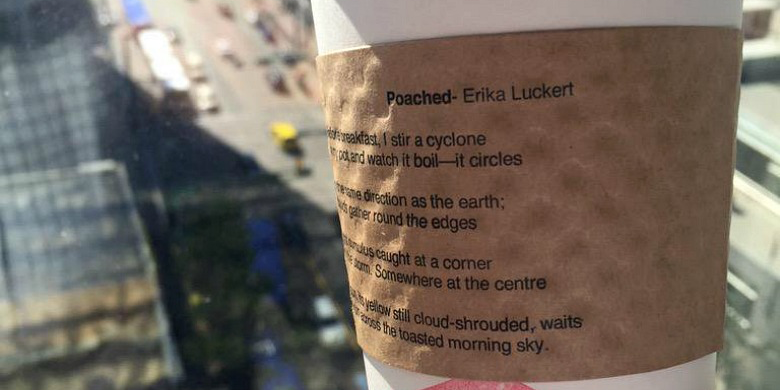 From flash fiction on coffee sleeves to bus poetry, bits of literature are popping up in the spaces where we live. (Photo: Jeremy Bibaud, via Twitter)

On an Edmonton Transit bus or train going downtown any given morning, among the backpacks and briefcases, small bits of literature creep in. A poem on a bus ad, a short story on a coffee sleeve, flash fiction on a smartphone screen—words are all around us, fitting into the small spaces in our lives.

“At first I wasn’t thinking about how ephemeral it would be, but then I started to like the idea that it was there whether you saw it or not,” says Jason Lee Norman, writer, University of Alberta alumnus and creator of the #yegwords coffee sleeves project. “I love any of that kind of stuff, whether it’s the poetry on buses or whatever, anywhere people can sneak it in. You’re not forcing it down anyone’s throat, but it’s there so you can see it and read it and feel something from it.”

It was on the morning train that U of A associate professor and Edmonton author Thomas Wharton became intrigued with the flash-fiction form. With a busy schedule, he was finding it harder to fit long reads into his day, so he picked up short stories. “If I was taking a short train ride to work, it was nice to be able to finish something on the trip.”

Wharton’s appreciation for the short form soon moved from reading flash fiction to writing the ultra-short stories himself.

“If they’re done really well, they can have this great flash of meaning or image that leaps out at you,” Wharton says. “It’s a difficult form—it appeals to writers because it’s a challenge to come up with something that resonates with readers in a few short paragraphs.”

He’s also taken flash fiction into the classroom. “For writers starting out, it can be difficult to finish a story. They’re trying to cram an entire novel into a few pages.” Capping students at 250 to 1,000 words forces them to be concentrate on every word and sentence they use. “Creativity works best when there’s a constraint.”

For Norman, these public pieces of writing help people to recognize that writing is art.

“You can pass by a painting or graffiti, and you can see that as art. People don’t always make those connections of writing as art. When they see it in a different way, people see it as art more easily.”

He also hopes people will begin to recognize that those artists are the people who live right in their communities. “There are writers all around you. It’s not just in big cities or the big serious novelists and writers. People forget there’s a writing community in the places that they live, and they have day jobs. They walk among you.”

People who see the sleeves are reminded that the person at the next desk over, or even the person who sold them the cup of coffee, might be the same person who created the story or poem—something Norman thinks reflects Edmontonians’ love of the local.

Short fiction isn’t new. Wharton notes that the last major period of popularity for short fiction was in the first part of the 20th century, before the advent of television. “The short story was king. You could make a living at it.”

But with the proliferation of entertainment media through the later half of the century, short fiction fell out of fashion. Now it’s seeing a comeback, which Wharton thinks is partly thanks to our busy lifestyles but also owes a lot to the emergence of another massive technology shift—the Internet.

“People don’t like to read on screens all that much, so online magazines and journals started to look for shorter materials.” Readers were attracted to shorter pieces that they could read on their computer or smartphone, and online publishers responded. At the same time, writers discovered that the new medium allowed them to reach audiences directly. “We have more opportunities to tell our own stories and disseminate them.”

The public presence of these stories reflects a continuation of our human love of the storyteller. “We don’t gather around the campfire or the town square to hear the storyteller anymore,” explains Wharton. Now we find them on our phone, in a park or on our coffee cup.

It’s the discovery of that storyteller in an unexpected place that excites Norman, who says he likes the idea of readers “not even realizing what kind of lover of the written word they are until they get these little treats out there.” For him, the coffee sleeves remind him of the feeling of childhood, when going to a fast-food restaurant meant the anticipation of knowing you’d get a Happy Meal toy to collect but not knowing for sure which one.

Loving the #yegwords wrapped around my coffee this afternoon. pic.twitter.com/e4Ror5LUzG

“I like the idea that people are going in, and maybe the barista puts the sleeve on the coffee for you, so you don’t know which one it will be. And then in other places, there’s a stack and you can choose one.

“You can be a literature lover anywhere and be a reader anywhere. It doesn’t have to be solitary. It can be something you discover out in the world.”