Should you feed wild birds in winter?

Bird feeders may do as much harm as good, says a U of A ecologist who offers four tips for putting out food without putting birds at risk. 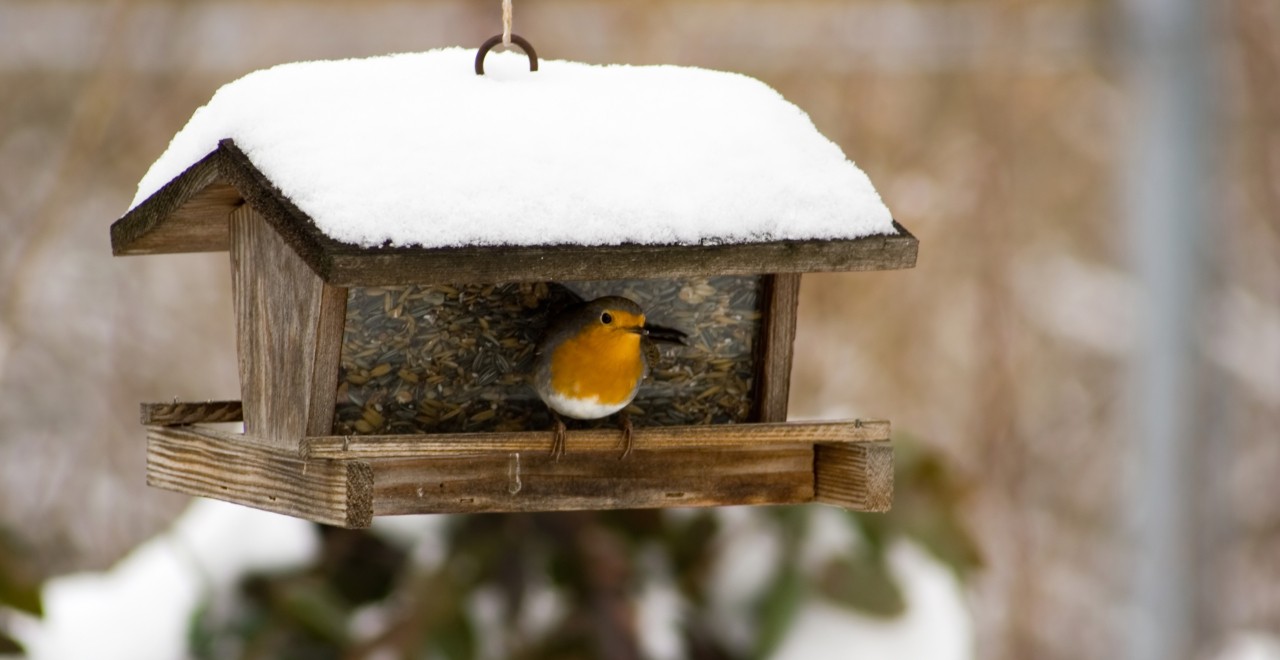 Bird feeders provide a winter food source for wild birds, but they also put birds at risk of collisions with houses and attacks by domestic cats, says a U of A ecologist. (Photo: Getty Images)

Nothing brightens a yard like a flock of twittering birds, and nothing draws them like a free meal—but it’s an open question whether bird feeders are good for them or not, says a University of Alberta expert.

“There are tradeoffs to feeding wild birds that people have to recognize,” said Erin Bayne, a professor in the Faculty of Science.

On the other hand, feeding could unwittingly pose mortal danger to them in a few ways.

Hanging feeders in the wrong spots can make birds vulnerable to attacks by hunting cats—their greatest predator in urban environments. One Environment Canada study estimated that 200 million birds could be saved by keeping cats indoors.

Deadly collisions with windows also take a toll. An estimated 957,000 birds die each year in Alberta alone from mistakenly crashing into glass, according to a 2015 study co-authored by Bayne.

The third factor to consider when feeding birds year-round is climate change, he suggested.

“With milder winters, we may create a situation where birds no longer choose to migrate if we feed them.”

In Regina, for example, mallard ducks are staying year-round on the lakes where people are feeding them.

“We are fundamentally changing the biology of that creature. Are we playing with the system by providing the food? It’s debatable as to whether that’s a good thing or a bad thing, since there’s not a lot of science to back it up at this point,” he said.

For people who choose to put up feeders, Bayne advises following these guidelines.

Either place feeders seven to 10 metres away from any windows, or do the opposite and hang the feeder right up against the house at an angled line of sight, so a bird won’t see a natural flight path through the house and won’t pick up enough speed to hurt itself. Placing feeders in the yard, as opposed to near the house, is the best way to keep birds safe, Bayne said.

“You can’t just randomly put up a feeder and you can’t just put it in a spot that’s best for you visually,” added Bayne, who suggested learning more through the Fatal Light Awareness Program and All About Birds.

It’s popular to hang feeders by a window for good viewing, but if birds can see through a house from front to back, they mistake it for a natural pathway to fly through, sometimes resulting in collisions with the window.

“When feeding wild birds, people have to be responsible about controlling their cats,” Bayne said.

A Nature Canada subsite offers several ideas on how to do that, including keeping them indoors or using safe outdoor options. Place feeders outside of pouncing distance from bushes or other places cats can hide.

Use species-specific feeders to help eliminate food pilfering by squirrels and other rodents.

“There are many designs that are optimal for the species of bird you like the most,” said Bayne.

Choices include platform, hopper and tube feeders, according to the Canadian Wildlife Federation.

“By landing on a feeder, an infected bird can drop saliva that can spread infection, or food can get mouldy and mildewed,” Bayne said.

Empty feeders monthly, discard any damp seed and wash them with hot water and a brush, then allow them to dry completely before refilling them. Keep feeders clean and dry to avoid food spoilage.

Should you feed wild birds in winter?