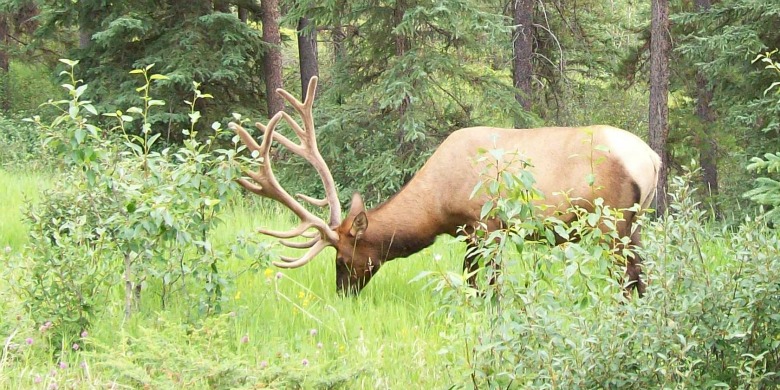 120905-cuitielk-banner
An elk grazes in a wooded area. U of A researchers found that the personality types of elk were linked with their survival in a hunting season.

(Edmonton) University of Alberta-led research shows that an elk’s personality type is a big factor in whether or not it survives the hunting season.

Data collected from GPS collars on more than 100 male and female elk in southwestern Alberta showed U of A researchers the study population could be divided into two categories: “bold runners” and “shy hiders.”

Bold-runner elk, both males and females, moved quickly through the study area and preferred to graze in open fields for the most abundant and nutritious grass.

Lead U of A researcher Simone Ciuti says shy hiders behaved very differently, choosing to graze on the sparse vegetation of wooded areas and moving slowly and cautiously.

The research also showed that far more bold-runners were taken by elk hunters than shy hiders.

Ciuti says this is the first time an animal’s personality type has been linked to survival in a hunting season.

“Up until now, it was believed the physical traits of an elk dictated what animals were taken by hunters,” said Ciuti. “Big male elk with large antler racks are traditionally the prime target for hunters.”

Ciuti says GPS data collected over one hunting season shows hunters are going for the most visible or available elk; thus, more bold-runner elk showed up in the scopes of high-powered rifles.

Ciuti says GPS collars were put on a specific group of male elk.

“For the study, 45 two-and-a-half-year-old male elk were collared,” explained Ciuti. “At two-and-a-half years of age, this was the first time these young males were eligible hunting targets.” Thirty-three per cent of the males were taken by hunters. All were identified by GPS data as bold runners.

Ciuti says the data showed something interesting in the survival rate of older female elk.

“All the females older than nine years survived the hunting season. That shows us that in female elk, whether they’re bold runners or shy hiders, if they lived to nine years of age, they adapted to hunters and became less visible targets.”

U of A biology professor Mark Boyce was a co-author and principal investigator on the research. Their work was published Sept. 5 in the journal Proceedings of the Royal Society B.