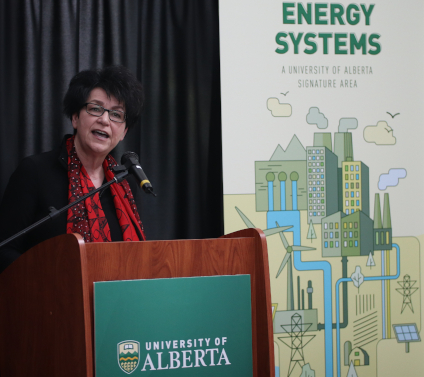 Energy Systems director Anne Naeth said the signature area will drive research and teaching not only about current and future energy, but also how new technologies will affect our lives. (Photo: Kenneth Tam) 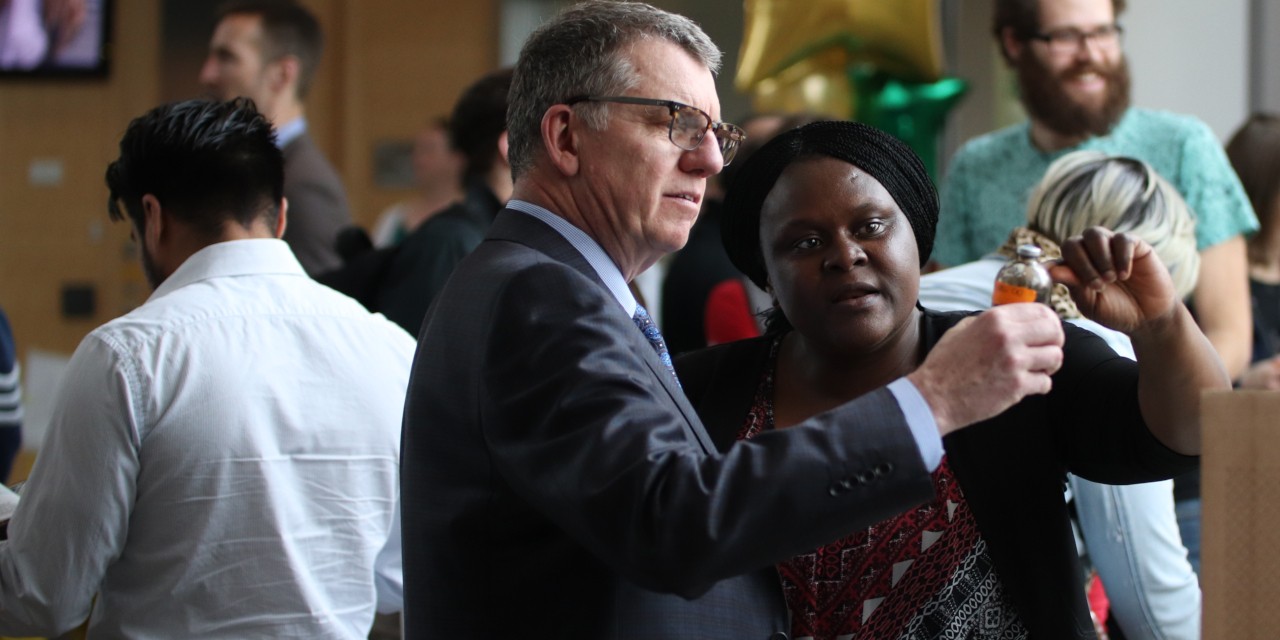 Growing up in rural Saskatchewan, Anne Naeth lived on a farm without power until her dad wired the house for a generator.

“Suddenly, we became part of a new energy system, from oil lamps and fire wood to buying diesel,” said the University of Alberta researcher. “Our lives and our relationship to our environment changed, as have billions of others around the world as energy sources evolve.”

Today, Naeth is the director of the U of A’s newest signature area of teaching and research excellence: Energy Systems.

“It is vital to conduct research and teach students about the technology that harnesses energy and the ways in which that technology interacts with our environment, our society and our lives,” said Naeth, at the signature area’s launch event at the U of A TELUS Centre.

She added it is crucial that researchers find new ways to access renewable energy from our environment, while also understanding what these new technologies can mean for our economy and cultures.

“It is essential that, at this institution, we do not shy away from the hard questions related to energy’s impact on all our lives, and the possibilities for energy in our future.”

Energy has been a big part of the U of A’s past, dating back to the 1920s when engineering researcher Karl Clark successfully separated oil from the oilsands.

“At the same time, we have also developed global research excellence in oilsands extraction and delivery, the impacts of greenhouse gas emissions on climate, water, human health, land reclamation, the Arctic, the boreal forest and food production,” said U of A president David Turpin, who added the university is one of the world’s elite producers of research on a wide array of current and alternative energy sources.

Under the Energy Systems signature area, Turpin said, approximately 500 faculty members in 18 faculties are involved, with research ranging from upgrading bitumen in pipelines to new kinds of solar fuels. The signature area will include and build on the U of A’s $75-million Future Energy Systems program, which was launched in 2016 to examine and innovate across the full energy spectrum, from industry to governance.

Helping to formalize the launch of the signature area were representatives from U of A industry partners.

John Zhou, vice-president of clean energy with Alberta Innovates, talked about a recent International Energy Agency report that predicts a global increase in demand for oil by 1.2 million barrels a day for the next five years. And while the United States will be leading the production increase, he noted even the more environmentally progressive country of Norway will increase its outputs by 600,000 barrels a day.

“We have an obligation to continue to innovate and improve the economics of oil recovery, while reducing the GHG emissions and increase the demand for sustainability,” said Zhou. “Collectively we need to look beyond the horizon and support what future energy systems will look like.”

Guy Bridgeman, senior vice-president of EPCOR Water Canada, said utilities operators are at the nexus of the changes being seen in energy systems.

He said EPCOR has partnered with U of A researchers on how they would integrate a 10-megawatt, 44,000-panel solar farm to be located on the E.L. Smith Drinking Water Plant in southwest Edmonton into the power grid. U of A researchers also studied what it would mean to the electric distribution system if the number of electric vehicles were to dramatically increase.

“Would you be able to plug your car in and charge it or not? Those changes, how the electric system is going to have to change to accommodate electrification, are part of the system and how we look at the system,” he said.

Chris Godwalt, senior technical adviser on water with Canada’s Oil Sands Innovation Alliance (COSIA), which comprises nine oilsands producers that manage about 90 per cent of the oilsands resource, said the group has spent $1.4 billion in collaborative research and has 981 technologies to show for that investment. He identified several current collaborations between U of A researchers and COSIA companies.

“We need groups like the U of A to continue to work with us. We look forward to those partnerships because they drive us forward,” he said.