Simulating weightlessness could give earthly answers for osteoarthritis

UAlberta study shows how microgravity affects onset of the most common form of arthritis. 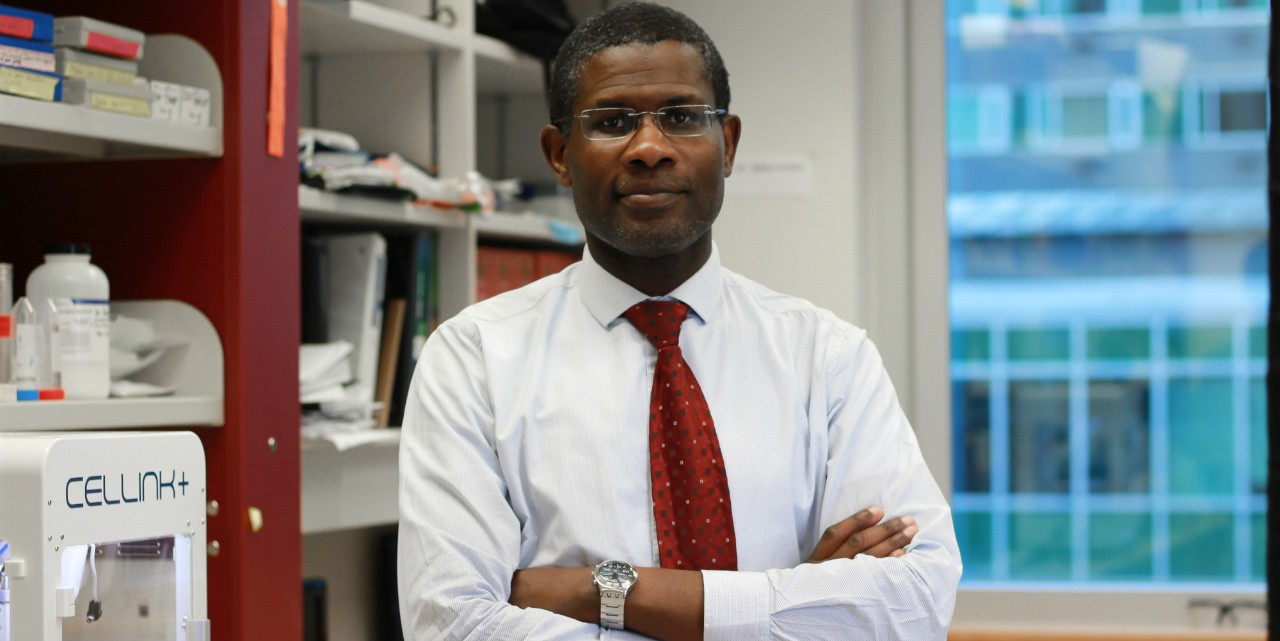 Adetola Adesida led a study looking at how a low-gravity environment changes genes in the meniscus of the knee that are linked with the onset of osteoarthritis. The results could help medical researchers better understand a disease that affects one in six Canadians. (Photo: Melissa Fabrizio)

A study simulating the effects of microgravity in space that shows why astronauts are likely to experience knee problems after returning from extended missions could also give valuable insight into the progression of osteoarthritis for the rest of us here on Earth.

Scientists subjected cells of the meniscus—a tissue in the knee that takes the weight of the body and distributes it evenly across the knee joint—to microgravity in a NASA-built bioreactor. The team found that, after three weeks, the cells experienced genetic changes associated with the onset of osteoarthritis that break down the meniscus.

“The changes that we are seeing within three weeks are quite significant,” said Adetola Adesida, an associate professor of surgery at the University of Alberta, who led the study. “Genes that are associated with normal health of the meniscus were switched off and genes that are detrimental were switched on. So for long-term missions into space, for example, where the astronauts will be there for six months or even more, it could be a problem.”

While osteoarthritis is a known hazard for returning astronauts, it’s also a significant issue for millions of people worldwide.

The most common form of arthritis, affecting about one in six Canadians, it is a disease of the joint that leads to a breakdown of joint cartilage and the underlying bone—causing it to start rubbing against other bone.

The disease is more prevalent in women than men, and symptoms include joint pain, stiffness and swelling. There is currently no cure.

By using the bioreactor, Adesida said, his team can now effectively model and mimic the development of osteoarthritis. They hope to use the model to better understand why the genetic changes occur and seek solutions to prevent them.

“It’s projected that by 2030, about 20 per cent of people in Canada will be affected by osteoarthritis,” said Adesida. “This is a major problem. It affects the way people work and how they live their lives. If we can understand the pathway of these genes, how they are switched on, perhaps we can find drug molecules that we can use to switch them off.”

Through ongoing research, the team hopes to find answers both for those living on Earth and those soon to blast off of it.

According to Adesida, the meniscus—which protects cartilage from wear and tear—has not been on the radar of NASA scientists working on the problem of post-space-travel osteoarthritis. He hopes to develop new strategies to help astronauts before they leave Earth’s atmosphere.

Adesida also hopes to learn why incidences of osteoarthritis are so much higher in women than in men.

“Nobody really knows what is causing that, and I think this could be a really nice system to look at the effects of sex on osteoarthritis,” he said.

The research, published in Nature Microgravity, is funded by the Canadian Institutes of Health Research, the Canada Foundation for Innovation, the University Hospital Foundation and the Edmonton Orthopedic Research Committee.

Simulating weightlessness could give earthly answers for osteoarthritis