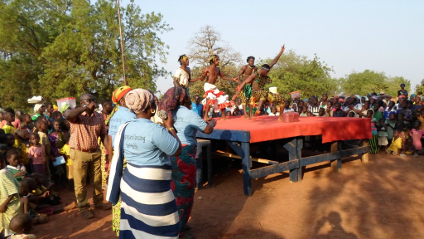 Entertaining and educating: Performers use music, dance and theatre to deliver health information in a more effective way than simple billboards can convey.

'Singing and Dancing for Health' puts spotlight on preventing malaria

Music professor Michael Frishkopf addresses the audience at a 'Singing and Dancing for Health' performance in Ghana.

On a sunny day in Ghana, locals of all ages have gathered around a bright red stage in their village, brimming with anticipation of what’s to come. As the audience members mingle and chat excitedly, performers prepare to take the stage.

A drumbeat pounds through the air. Next comes lively music, and before long the audience is moving to the rhythm. Brightly dressed characters come to life on stage with an energy that captures the audience immediately. The performers call out to the excited crowd, getting them involved with enthusiastic shouts and laughter.

For such a colourful, lively performance on this beautiful day, the topic is far more sobering than one might expect.

This performance is part of “Singing and Dancing for Health,” a project that is teaching communities in Ghana about the dangers of malaria and how to prevent it.

Health issues related to sanitation and the spread of diseases such as malaria are a prevalent concern in Ghana. Though there are strategies and programs in place to support public health, one of the many challenges is raising awareness and communicating with local communities about methods of prevention.

In response to this challenge, Singing and Dancing for Health creates high-quality performances that use song and dance to educate audiences about important issues in public health. To date, the project has focused on education about sanitation to prevent cholera and malaria, with future plans to create performances centred on Ebola awareness as well as maternal and neonatal health.

Michael Frishkopf, a University of Alberta music professor and director of the Canadian Centre for Ethnomusicology, led the research team that brought the project to fruition in 2015, thanks mainly to a Killam Cornerstone Grant.

“Music may appear as a surprising tool for improving community health,” notes Frishkopf, “but in addition to its considerable health benefits for individuals, music is a powerful social technology capable of galvanizing groups of people around health issues, and disseminating messages in a powerful and memorable form.”

A new memorandum of understanding, signed in 2016 by the U of A and the University for Development Studies in Ghana, will allow the project to continue building momentum. University of Alberta International (UAI) provided administrative efforts and expertise to build the formal partnership framework. The agreement establishes a formal link between the two universities, allowing the U of A and the UDS School of Medicine and Health Sciences to expand the reach of the project in Ghana by collaborating on funding applications and research.

“UAI has been helping Michael Frishkopf and his partners in Ghana to forge a formal framework for their co-operation,” says Britta Baron, U of A vice-provost and associate vice-president (international). “Using music, dance and theatre to more effectively distribute information on health and safety to people in Ghana is a wonderfully creative project. All the evidence shows that it also is very effective. This idea could and should spread, and music can become a new channel of communication for educating local populations—not only in Ghana on critically important health information, but also beyond.”

The performances take place as “dance dramas” incorporating elements of music, song, dance, poetry, drama and comedy. After the team has composed the scripts, music and choreography, and then vetted the content from both public health and artistic perspectives, the drama is staged and recorded. Recordings are then prepared for broadcast on local and national television as well as online.

“Public health campaigns often rely on textual messages on billboards, but these appeal primarily to the individual intellect, and illiteracy limits their impact; both texts and images are limited by their material form,” says Frishkopf. “By contrast, performance is highly affective in groups. Catchy songs are repeated and taught to others, allowing information to diffuse rapidly through grassroots social networks.”

Having secured the co-operation of local leaders and the Ghana Health Service, live performances are mounted in regional villages. Youth groups are formed, equipped and trained to carry on these performances for traditional, school and civic occasions, creating a new health-oriented, sustainable performance culture that will be shared through oral tradition from one generation to the next.

In addition to Frishkopf and the Canadian Centre for Ethnomusicology, the Singing and Dancing for Health project team includes professionals from across Canada and Ghana: Ghana’s Youth Home Cultural Group, a performance troupe; Ghanaian researchers Mubarak Alhassan, Ibrahim Zukpeni and Sulemana Abu; Ghana Health Service; Ghanaian chiefs, elders and other village authorities; public health researcher Hasan Hamze from the U of A; and David Zakus, Ryerson University Professor of Distinction in Global Health.

In addition to the Killam Cornerstone Grant, funding has been provided by the U of A Faculty of Medicine & Dentistry Division of Community Engagement and the Centre for Health and Culture, the U of A Faculty of Arts, the Department of Music's President's Fund, folkwaysAlive! and Global Affairs Canada (DFATD/CIDA).

Thanks to the agreement, faculty and students at the UDS School of Medicine and Health Sciences will soon be involved as well, strengthening the project’s research base in Ghana.

'Singing and Dancing for Health' puts spotlight on preventing malaria