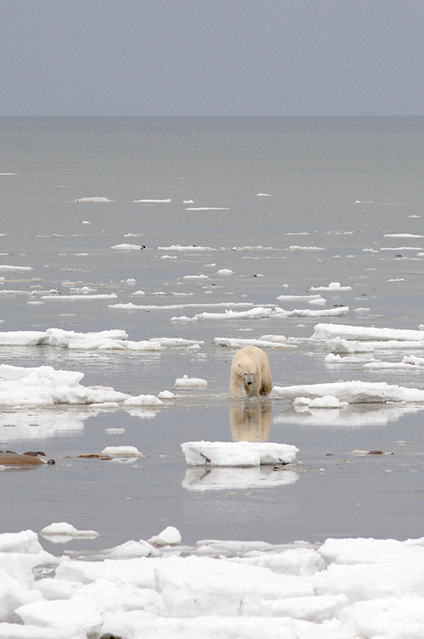 Polar Bears are swimming more due to sea ice loss.

A newly published study led by scientists from the University of Alberta has revealed troubling new data about swimming behaviour in polar bears.

Long-distance swims can be dangerous for the most vulnerable polar bears, including the youngest, oldest and skinniest.

As a result of changes in the amount and location of summer sea ice, researchers have found that the yearly proportion of polar bears undertaking long-distance swims (exceeding 50 kilometres) in the Beaufort Sea increased over the study period (2004–2012).  Such long-distance swims can be deadly, with negative consequences in offspring survival and mass loss.

“While polar bears as a species are eminently suited to swimming, not all bears are equally able to swim long distances,” explains biological sciences professor Andrew Derocher, co-author on the study. “The youngest, oldest and skinniest bears are much more vulnerable to drowning. With more open water, we can expect increased mortality associated with more long-distance swimming.”

The study’s lead author, U of A alumnus Nicholas Pilfold, adds, “Recent studies indicate that swimming may be energetically costly to polar bears. Given the continued trend of sea ice loss, we recognize that an increased frequency in the need to engage in this behaviour may have serious implications for populations of polar bears living around the Arctic Basin.”

The study used satellite-linked telemetry to track polar bears in the Beaufort Sea and Hudson Bay, with results showing an increase in swimming associated with climate change-induced ice reduction. In 2012, when sea ice broke its record low, 69 per cent of the tracked adult females in the Beaufort Sea swam more than 50 kilometres at least once.

By comparison, in years with a slower melt, less than 30 per cent of the bears were swimming long distances. “The pattern of long-distance swimming by polar bears in the Beaufort Sea shows the fingerprint of climate change,” says Pilfold. “Swims are occurring more often in association with sea ice melting faster and moving farther from shore in the summer.”

The study also revealed regional differences, with satellite tracking data showing that bears in the Hudson Bay area—where the location of the sea ice melt has not changed—engaged in long-distance swims less frequently than those in the Beaufort Sea, highlighting the variability of climatic change on species response.

“When I started studying polar bears in 1984, sea ice in the Beaufort Sea was visible from shore year-round,” says Derocher. “In recent years, the ice has retreated several hundred kilometres offshore by September and it’s a much more challenging habitat for the bears to live in.”

Swimming frequency and other movement factors varied between individual bears and showed differences dependent on age, sex, body size and geographic features of the region. Females with young cubs tended to swim less to avoid submersion of youngsters in cold waters, while lone subadults swam as frequently as lone adults. The longest recorded swim in the study was by a subadult female that travelled more than 400 kilometres in just nine days.

The study, “Migratory response of polar bears to sea ice loss: to swim or not to swim,” was published in the peer-reviewed journal Ecography.