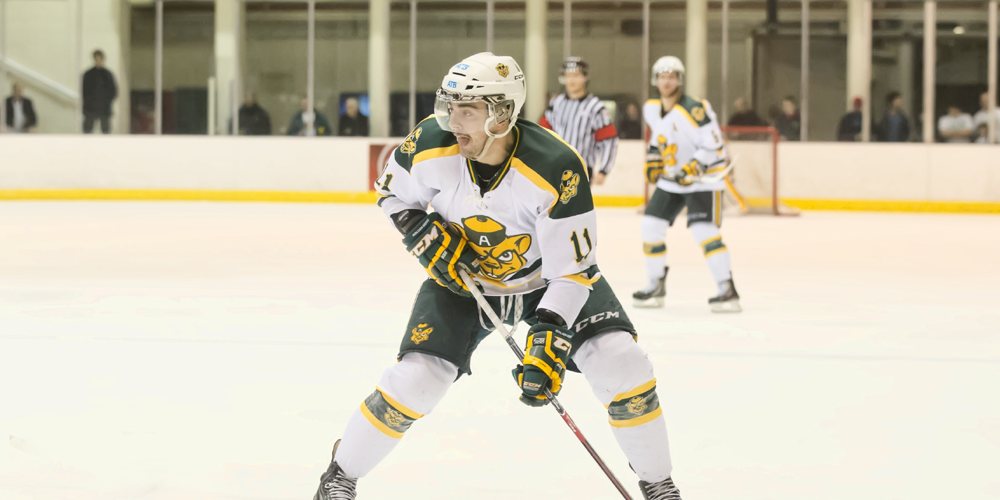 Six members of the defending national champion University of Alberta Golden Bears hockey team have been named to Team Canada for the upcoming 2015 Winter Universiade, which will take place in Granada, Spain from February 3-14, 2015.

The Golden Bears who will don Team Canada sweaters are defencemen Jesse Craige (Edmonton, 5th) and Jordan Rowley (Edmonton, 4th) as well as forwards Jordan Hickmott (Misson, B.C., 4th), T.J. Foster (Slave Lake, Alta., 2nd), Levko Koper (Edmonton, 4th), and Kruise Reddick (Manor, Sask., 4th). Both Rowley and Craige are former All-Canadians and Canada West Defencemen of the Year award winners, and Rowley attended Edmonton Oilers’ camp this past fall. Hickmott, who attended New York Rangers camp before joining the Bears, is currently second in points in CIS with 29 and first in goals with 14. Foster has 27 points, which is fourth best in CIS, while Koper has 17 and Reddick has 11. Koper, a draft pick of the Atlanta Thrashers (2009, 7th round, 185th overall) and a Memorial Cup winner with the Spokane Chiefs, was the University Cup hero in 2014 when he scored a pair of goals, including one shorthanded, to lead Alberta to its 14th national championship trophy, while Reddick was also key to that University Cup title win, as he returned from injury just days before the tournament began, and put up five points in three games to earn a spot on the University Cup All-Star team. He also serves as the Golden Bears captain.

Canada will be entirely represented from student-athletes from the Canada West conference, and the U of A leads the way with six players. The team will be coached by University of Saskatchewan bench boss, Dave Adolph, who is the longest-serving coach in Canada West.
The 27th biennial Games will run from Feb. 3-14, with the men’s hockey gold medal match set for the final day of competition. Canada is the defending men’s hockey FISU champions, as the AUS conference won gold in 2013 in Trentino, Italy.

Since 1997, Canada has been represented at the Games in men’s hockey by each of the three CIS conferences on a rotating basis. Canada West teams have medaled in all three appearances, capturing bronze in 1997 (Muju-Chonju, South Korea) and 2003 (Tarvisio, Italy) as well as silver in 2009 (Harbin, China). The entire Golden Bears team represented Canada at the games in Jaca, Spain in 1981, and earned Canada the gold medal.

In 14 all-time appearances at the Universiade tourney, the Canucks have tallied an impressive 13 medals, including four gold, three silver, and six bronze.

Eleven countries will compete for gold in Granada. Canada joins Russia, Sweden, and South Korea in Pool B, while a three-team Pool C consists of Kazakhstan, Japan, and the United States. The host Spanish join Slovakia, the Czech Republic, and China in Pool A. The top two finishers from each pool and the two best third-place teams will advance to the quarterfinals.

The Canadians open the tournament on Feb. 3 when they face South Korea. Other preliminary games include Sweden (Feb. 5) and Russia (Feb. 7) before the medal round begins Feb. 11.