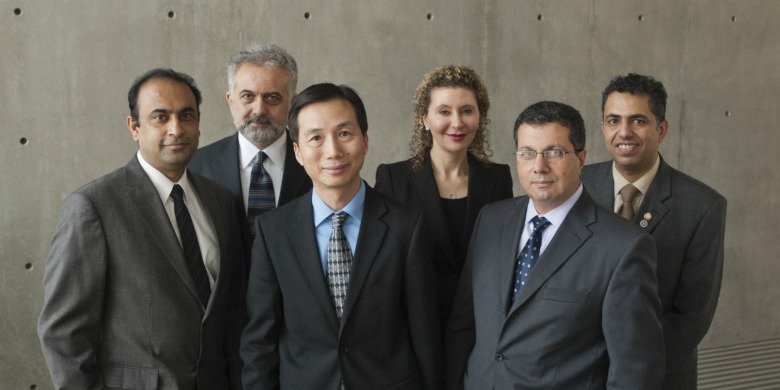 “We searched our archives and I can confirm this is the biggest industrial chair announcement that we’ve ever made,” said NSERC President Suzanne Fortier. “We’re celebrating talent and a lot of hard work today.”

The work of the researchers is varied, from focusing on reducing both water usage and the size of tailings containment ponds in the oilsands to contributing to efficiencies in the construction industry. Their work was presented to a gathering of peers and industry professionals. Fortier spoke of talent, knowledge and innovation as the key assets to successfully competing in a global, knowledge-based economy.

Fortier noted that these new chairs “are joining a select group of exceptional people,” all of whom have shown themselves to be leaders in their fields of research. University of Alberta President Indira Samarasekera said there was much to celebrate in this announcement as the new researchers represent the highest number of NSERC chairs at any Canadian university.

"It’s your work and success that exemplifies the strength of the University of Alberta’s Faculty of Engineering,” said Samarasekera. “These chairs are a testament to this faculty’s longstanding ability to collaborate with industry.”

Samarasekera said faculty and industry have built these relationships successfully, resulting in the development of practical technologies and processes that faculty has developed and industry has adopted with much success.

“This is the only way we can solve challenging problems,” she said. “It requires the intellectual leadership of top-quality researchers. But they only can apply that leadership when challenging problems are identified by their industrial partners that are truly worthy of rigorous academic, but also pragmatic, approaches.”  Samarasekera said that the academic/pragmatic union produces solutions that are both economically and technologically viable.

Dean of Engineering David Lynch said the impact of the industrial research chairs will have an impact on the “triple bottom line” that includes the environment, the economy and society.“It is through these kinds of collaborations that these three elements come together,” he said, adding that the NSERC industrial chair program draws national and international supporters—and is envied by other nations.

The six recipients named in this industrial research chair announcement, which represented an NSERC investment of more than $5.7 million dollars, are: