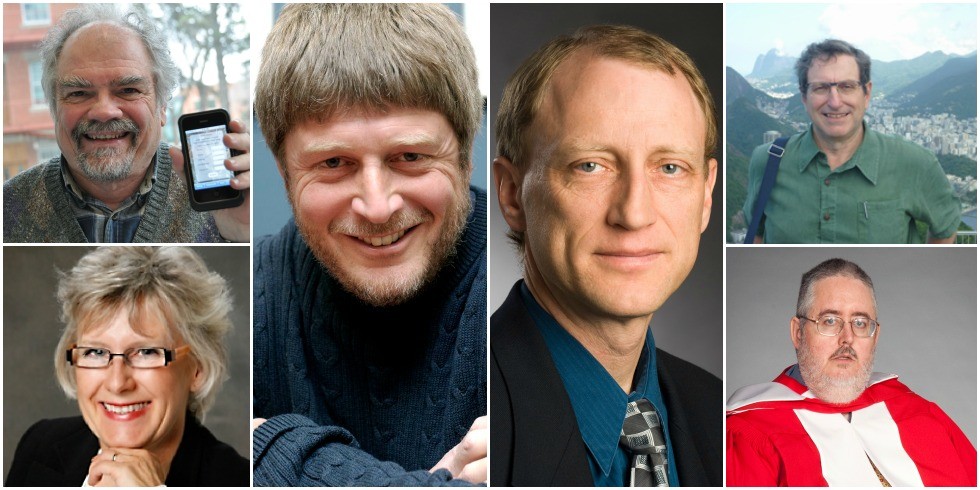 (Edmonton) In recognition of their outstanding scholarly, scientific and artistic achievements, six University of Alberta faculty members have been elected as fellows of the Royal Society of Canada.

Mark Boyce, a professor in the Department of Biological Sciences, is a world-leading population ecologist and conservation biologist who links applied and theoretical aspects of ecology to some of the world’s highest-profile conservation issues. With more than 200 publications, including six books, the Alberta Conservation Association Chair in Fisheries and Wildlife has made huge contributions to basic science involving stochastic demography, population viability analysis and modelling approaches for habitat ecology.

Boyce says the U of A rewards productivity and has provided him with great colleagues and graduate students as well as the academic freedom to do what he finds interesting.

“Most satisfying for me has been the opportunity to conduct applied research that really makes a difference for wildlife conservation,” said Boyce. “Despite the alarming pace of industrial development, Alberta still hosts some of the most spectacular wildlife resources on the planet.”

Warren Finlay, a professor in the Department of Mechanical Engineering, leads an internationally renowned research group that has profoundly shaped the field of medical aerosols and revolutionized respiratory drug delivery. From aerosol deposition in the respiratory tract, to novel aerosolized formulations, the group’s research covers the gamut from basic fundamentals to essential technological significance. Their clever synthesis of diverse fields has resolved long-standing challenges in the science of aerosol drug delivery and improved the treatment of respiratory diseases worldwide.

Finlay says it is an incredible honour to recognized by his peers in this fashion, but is quick to give credit to Alberta’s education system, and specifically a U of A undergraduate degree.

“Our undergraduate education here at the U of A is second to none and stocks my lab with incoming graduate students that are absolutely outstanding, and that’s what I get to work with.”

An adventurous and consummate keyboard artist, Marnie Giesbrecht, a researcher in the Department of Music, is passionate about playing and teaching a breadth of keyboard instruments, including organ, piano and harpsichord, allowing idioms and techniques to cross-pollinate and create new modes of expression. Internationally acclaimed for her work with the Duo Majoya, she is renowned as a performer, pedagogue and advocate for the organ and Canadian music.

For Giesbrecht, being in Edmonton and at the U of A has made all the difference for a research career based in the sound of music.

"Edmonton's growing number of keyboard instruments in a variety of venues—or 'sound laboratories'—has provided superb opportunities for musical exploration and experimentation," she said. "The University of Alberta is an inspiring environment where interactions with enormously talented colleagues, as well as students, are daily privileges."

Bernie Linsky, a professor in the Department of Philosophy, is one of the world’s foremost historians of the foundations of mathematical logic in the early 20th century. His incisive analyses have led to an extensive reconsideration of the received view of the way logic has affected mathematics and philosophy. His innovative manuscript research has also opened, for the first time, essential works in the history of mathematical logic to direct study by anyone versed in modern logic.

Linsky, whose first job in the fall of 1975 was at the U of A, says he has been lucky enough to have many colleagues during those years who have been essential in discussing his work. He also credits his department’s support for his success, as well as, to his surprise, a wonderful library collection of books examining the history of logic and philosophy a century ago.

“They were acquired years ago as they were published. Some were not checked out much for many years, but now they have become an excellent collection of old rare books. It seems that if you just keep working on what interests you, then even if you become somewhat out of fashion in your interests, at some point you will be an expert on the history of your subject—if you just wait long enough.”

Martin Sharp, a professor in the Department of Earth and Atmospheric Sciences, is a leading international voice documenting polar environmental change in a warming world. Sharp’s prescient and innovative research focuses on the links between glaciers, the atmosphere and oceans. His benchmark contributions to our understanding of high-latitude ice masses include quantifying their meltwater contribution to global sea level rise, an issue with enormous societal implications.

Sharp says he came to the U of A in 1993 because it afforded him the opportunity to work on the glaciers of the Canadian Arctic Islands. He says outside the ice sheets of Greenland and Antarctica, this is the world's most heavily glaciated region, yet they had been markedly under-researched.

“Changes in these glaciers over the past decade have made a major contribution to the current rate of global sea level rise, and we have been able to document and explain this,” he said. “My studies have been possible because being at the U of A enabled me to access the NSERC funding and logistic support from Canada's Polar Continental Shelf Project, without which none of the work I have done over the past 20 years would have been feasible. The graduate students and post-doctoral fellows who have come to work with me at the U of A have played a fundamental role in all of that work, and U of A support for their research has been critical to their contribution to the success of my program.”

Austin Mardon, an assistant adjunct professor with the U of A’s John Dossetor Health Ethics Centre, was named to the Royal Society as a Specially Elected Fellow, in recognition of his accomplishments as an advocate for people with mental illness.

Mardon’s contribution to our store of knowledge on living with mental illnesses and the stigma that surrounds them has been immense and unique. Mardon, who was diagnosed with schizophrenia at age 30, has devoted his life to educating professionals and the public on mental illness. He has given hundreds of speeches, written scores of articles and allowed himself to be the public face of schizophrenia in Canada, all of which resulted in his receiving a U of A honorary degree in 2011, as well as induction into the Order of Canada in 2007.

Mardon, who helped set up a U of A scholarship—the first of its kind anywhere—for students with schizophrenia, says being elected to the RSC is a great honour and should stand as a testament to what can be accomplished by people with mental illness.

“Students with mental illnesses, not just severe schizophrenia, but also depression, OCD and bipolar disorder—higher functioning mental illnesses—should take it in hand that they can function at a high level and have a good life and achieve things,” said Mardon.

The Royal Society of Canada was founded in 1882 and is Canada's oldest and most prestigious scholarly institute. With this year’s inductees, the U of A now has more than 120 members.