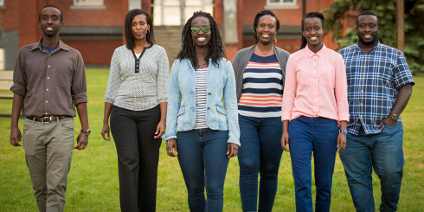 Dany Bazira (third left) with her five siblings, all of whom have also graduated from Campus Saint-Jean
“

The diversity came together and created something. Friends could gather around and create a family. To me, that’s what Campus Saint-Jean is about.

For Dany Bazira, graduating from UAlberta’s French-language campus—and giving back to the community—is a proud tradition. 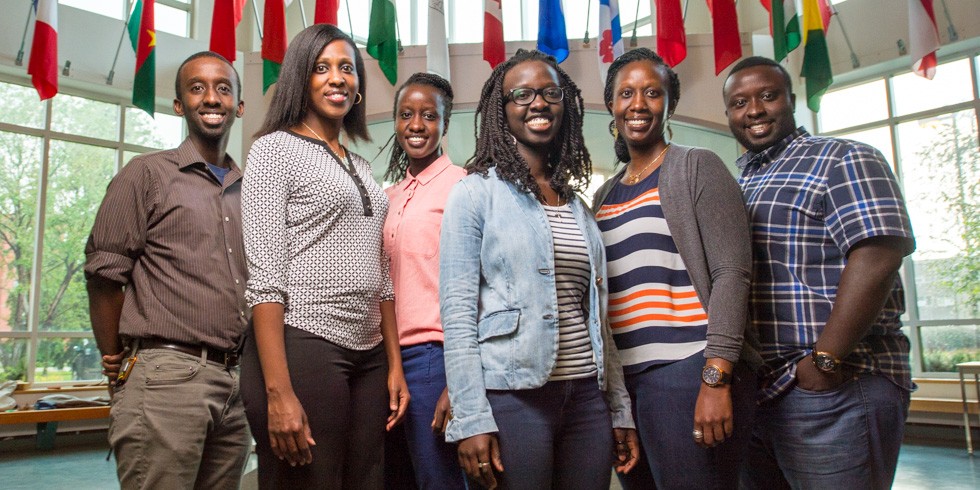 Dany Bazira (third from right) is the last and youngest of six siblings to graduate from Campus Saint-Jean. Originally from Burundi, the family has made CSJ a second home by volunteering and helping other international students settle into campus life. (Photo: Richard Siemens)

You could say that Campus Saint-Jean, the University of Alberta’s French-language campus, is a proud tradition for the Bazira family.

As she graduates with a science degree June 9, Dany Bazira, 21, is the last and youngest of six siblings to say goodbye to CSJ. Along with her books, she packs up warm memories of a place she, her two brothers Valery and Landry, and three sisters Floriane, Doriane and Martine have called home for more than a decade.

Between 2007 and 2016, the Bazira children—originally from Burundi, Africa—all graduated from the U of A with a smattering of degrees in education, arts (political science and economics) and science. All of them attended CSJ, making the most of their time there by volunteering and contributing to the family atmosphere of the small but vibrant campus.

“We made our place at Campus Saint-Jean,” Dany Bazira laughs. “If you ask about the Bazira family, they know who we are. We all enjoyed our experiences at CSJ and at the main campus.”

“Their involvement goes way beyond what is expected from students,” says Pierre-Yves Mocquais, dean of Campus Saint-Jean. The Baziras were generous in volunteering their time in various student groups including the Students’ Union and were instrumental in helping launch CSJ’s World University Service of Canada club, focused on international development. Throughout their academic years, their work was so integral to CSJ, all were employed by the campus in various ways.

With French as their first language (along with their mother tongue of Kirundi), the Baziras were first encouraged by an aunt who was living in Calgary to attend Campus Saint-Jean. “It was close to family, and my parents saw the opportunity to continue our education in a language we had already mastered and to improve our English,” Dany says.

Their father, a surgeon, and mother, a sociologist, still live in Africa, but insisted that each of the children get a post-secondary education, even if it meant travelling far from home. “My dad always says, ‘I have a PhD so you need to do better than me,’” Dany says. She and her siblings are grateful to their parents, as well as to their professors, staff and the two deans—Marc Arnal and Mocquais—who served Campus Saint-Jean while the Baziras attended school.

“Everyone there made us feel welcome and they were very supportive if you needed encouragement or advice,” Dany says.

Eldest sister Floriane Bazira was the first to graduate in June of 2007 with a degree in education, after arriving on campus in 2003 as an international student. Then came Doriane in November of that year, with a degree in political science. Brothers Landry and Valery both followed in June 2009 with degrees in economics and science, respectively. Valery, who received a Promising Future alumni award from CSJ last year, also graduated with an education degree in 2014. Martine graduated in 2015 with a degree in science, followed by Dany this year.

During their time as CSJ students, the clan shared a house close to the campus, but spent many of their spare hours apart from studying and classroom time in volunteer activities on campus. It was important to all of them, Dany says.

“We found that it was a value people have here; it was a way to get to know people, to help out others—and we’ve always been taught this, so it was natural, particularly at CSJ. It’s such a small campus, you get to know everyone by volunteering.”

As members of various student clubs, the Baziras learned many life lessons, Dany says. For her, it was new friends, leadership and skill development. “People start trusting you and it just goes from there.”

She found it especially rewarding to assist other international students as they settled into campus life, much as her own family did. Intercultural evenings, with a colorful array of potluck dishes and performances from around the world, were a favourite event for Dany. Students from China, Europe, Tunisia, South America and other places would come together for an evening of fun and learning.

“The diversity came together and created something. Friends could gather around and create a family. To me, that’s what Campus Saint-Jean is about, to come up with something as beautiful as International Night.”

Doriane, who was the first of her siblings to attend CSJ, lived in residence for two years and remembers it warmly. Homesickness was chased away by events like homecoming parties and treasure hunts.

“I made a lot of friends and I felt at home because I was having a lot of fun. The people who I was living with and going to school with became my family. Campus Saint-Jean has a great tradition of making students feel at home.”

Valery, brother to Doriane and Dany, still considers CSJ part of his life, and is on campus on average once a week. Now a teacher at a nearby school, he invites some of his former professors to speak to his classes, attends community events in the CSJ auditorium and library, and enjoys the green space around the campus.

“It is nice to go to a place where people know you. The campus has a home feeling,” he says. Like his sisters, Valery was an involved student volunteer who, through time spent with other students from around the world, gained an understanding of global affairs and insight into social issues like terrorism.

“It was definitely good to know people and hear their stories first-hand. Building tolerance and acceptance opened my eyes on different issues I wasn’t aware of, the norms for other people.”

As the newest graduate of CSJ in her family, Dany, who plans to apply for medical school, credits her time at the U of A for readying her to take on the world.

“You definitely are capable of doing more than you think, especially if you have a strong support system, friends, family and professors. You could always get a pep talk from someone.”

Doriane, who just completed an MBA from Université de Moncton, credits her education at CSJ with giving her the tools to succeed. “CSJ made me more confident. Everybody is there for you and that stays with you. They build you up to be a leader and to go after what you want.”

Will the next generation of Baziras also attend CSJ? Dany says anything is possible.

“We will definitely tell our kids, go check out CSJ, this is where we built long-lasting friendships.”