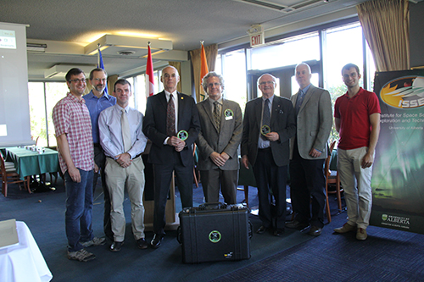 It was a champagne send-off for one of the University of Alberta’s smallest but mightiest devices yet.

A small crowd gathered Friday afternoon to bid farewell to Ex-Alta 1, the cube satellite designed and built by the student-led AlbertaSat team as part of the QB50 mission.

“The journey to make Alberta a space-faring province starts today,” said Duncan Elliot, Professor of Engineering and co-lead on the project.

Once it leaves campus early next week, the satellite will travel to the Netherlands to join 49 other cube satellites for final testing prior to a launch to the International Space Station (ISS), slated for December. Ex-Alta 1 will make a pit stop aboard the ISS, where it will be prepped for its final launch into Earth’s orbit. It is expected to journey for roughly 18 months and, in its first year, travel the world 5000 times.

It really demonstrates how the university is leading in many areas and represents how we are stronger when we work together” said Lorne Babiuk, Vice-President (Research) for the University of Alberta. AlbertaSat is a joint project between the Faculties of Engineering and Science. The initiative was driven by undergraduate students with faculty support.

“Only with the passage of time will you be able to look back and understand the significance of what you’ve done,” said Jonathan Schaeffer, Dean of the Faculty of Science, in his toast to the team of nearly 50 undergraduate and graduate students. “Without your hard work, this would have remained just a dream.”

Echoed Fraser Forbes, Dean of the Faculty of Engineering, “You are the first generation of generations to come who will establish aerospace as part of what U of A does. Be proud of that legacy.”

Following its final launch from the ISS in 2017, Ex-Alta 1 will monitor space weather on a completely new scale of science. The mission represents an unparalleled opportunity for the University of Alberta and the province as a whole to demonstrate a capability for space technology and the betterment of humankind on a global scale.

“This is the beginning of a new era of space exploration,” said Ian Mann, co-lead and Professor in the Department of Physics. “This is not such a small step but rather the beginning of a giant leap for the U of A and Alberta’s space industry.