Our small molecules could be compared to a ‘magic drug’ that can be used against many types of cancer.

Small but mighty molecules: Transforming the fight against cancer

Partnership between UAlberta dream team and funders could be ‘game-changer’ for patients. 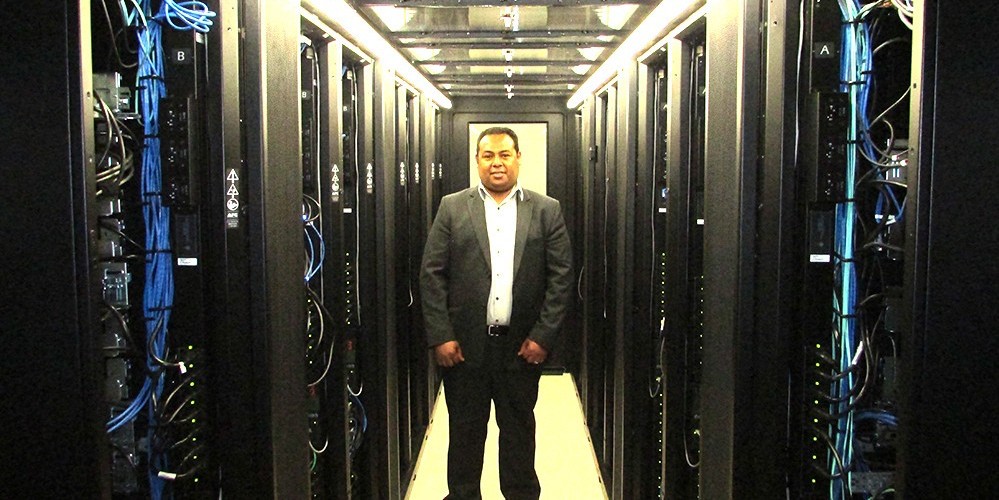 For the last year, Khaled Barakat has been mulling over how to develop a less invasive and more economical and efficient way to treat cancer. Based on conversations with his mentors, Lorne Tyrrell and Michael Houghton, and an exciting new research partnership, Barakat’s vision is coming closer to reality.

Barakat, a research assistant professor in the Faculty of Pharmacy and Pharmaceutical Sciences at the University of Alberta, is leading a “dream team” in the battle against cancer—and he’s using small molecules and a supercomputer to do it.

Thanks to a $5.4-million partnership between the Alberta Cancer Foundation and the University of Alberta’s Li Ka Shing Institute of Virology, Barakat will lead almost a dozen of the world’s greatest minds in oncology, virology, immunology, chemistry, dentistry and pharmaceutical sciences, taking the next step in changing how cancer patients are treated.

Recent developments in cancer immunotherapy have shown tremendous promise by triggering the immune system to recognize tumours as “foreign agents” and destroy them.

“Malignant tumours are very smart; they deactivate the T cells, a very important part of the immune system, which normally circulate in the blood, detect bad cells and then destroy them,” says Barakat.

“Our team is developing small molecules to replace the antibodies currently used in immunotherapy, which target specific proteins on the surface of T cells called immune checkpoints,” he says. Side-effects of drug treatment using antibodies include the potential for overactivation of the immune system, which sometimes results in the immune system attacking the organs and cells of the patient.

But Barakat’s small-molecule treatment, called the Immune Checkpoint Program, will stimulate the T cells into naturally attacking the tumours by targeted specific binding sites on T cells with less risk of side-effects for the patient, partly because the molecules are in the body for less time.

The Alberta Cancer Foundation believes in the potential of this team and is investing $2.4 million into their research. “This partnership with the University of Alberta and Li Ka Shing Institute will allow researchers to look at novel ways of treating cancer, where they target the immune system rather than the tumour itself,” says Myka Osinchuk, CEO of the Alberta Cancer Foundation. “Immunotherapy has been described as a breakthrough for this disease, so we are pleased to make this investment on behalf of our donors and are excited about its potential on Albertans facing cancer.”

The partnership with the Alberta Cancer Foundation led the Li Ka Shing Institute of Applied Virology to contribute $3 million to the project as well.

Also part of the dream team is one of the world’s fastest computers. “Using the IBM Blue Gene/Q supercomputer, our team is able to simulate Immune Checkpoint in their physiological environment and mimic their dynamical behaviour in human cells,” says Barakat. “It also allows us to visualize and identify hotspots on these proteins that can be targeted with small molecules, and hence rationally design small molecules that can reactivate T cells.”

What’s different about this research is not only that these small molecules are being used to reignite the body’s natural fight against tumours, but also that this treatment can be applied to many types of cancer.

“The concept has been proven by antibodies in many cancer types including advanced melanoma, one of the hardest cancers to treat,” notes Barakat.

“Our small molecules could be compared to a ‘magic drug’ that can be used against many types of cancer.”

As a potential therapy for cancer treatment, the small-molecule scenario has another important factor to consider: its cost. “Its development will result in being cheaper to make, hopefully causing the price for these drugs to be more affordable to many patients and health-care systems,” says Barakat.

The team plans to have a “lead structure”—an almost-ready drug that needs only small tweaking and optimization—in place by the end of the second year of the project. At that point, they will be seeking a pharmaceutical partner to develop this lead structure into a drug for human trials by 2020.

“Our idea is to build upon these successes, but to provide a new way of doing it, a way that is cheaper and in the meantime can reduce side-effects,” says Barakat. “We are working together from a number of disciplines at the U of A to come up with what we hope are better outcomes for cancer patients and those who suffer from chronic illness in Alberta and around the world.”

Small but mighty molecules: Transforming the fight against cancer