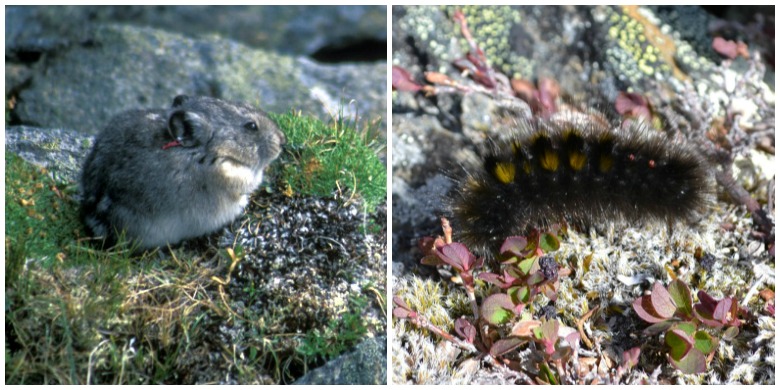 130424-pika-caterpillar-banner
Partners in grazing: The pika (left), a small furry mammal, and the Arctic woolly bear caterpillar are unlikely allies in the competition for scarce food supplies in mountain areas of the southwest Yukon.

(Edmonton) Who would have thought that two very different species, a small insect and a furry alpine mammal, would develop a shared food arrangement in the far North?

University of Alberta researchers were certainly surprised when they discovered the unusual response of pikas to patches of vegetation that had previously been grazed on by caterpillars from a species normally found in the high Arctic.

U of A biology researcher Isabel C. Barrio analyzed how two herbivores, caterpillars and pikas, competed for scarce vegetation in alpine areas of the southwest Yukon. The caterpillars come out of their winter cocoons and start consuming vegetation soon after the snow melts in June. Weeks later, the pika starts gathering and storing food in its winter den. For the experiment, Barrio altered the numbers of caterpillars grazing on small plots of land surrounding pika dens.

“What we found was that the pikas preferred the patches first grazed on by caterpillars,” said Barrio. “We think the caterpillar’s waste acted as a natural fertilizer, making the vegetation richer and more attractive to the pika.”

U of A biology professor David Hik, who supervised the research, says the results are the opposite of what the team expected to find.

The researchers say it’s highly unusual that two distant herbivore species—an insect in its larval stage and a mammal—react positively to one another when it comes to the all-consuming survival issue of finding food.

These caterpillars stay in their crawling larval stage for up to 14 years, sheltering in a cocoon during the long winters before finally becoming Arctic woolly bear moths for the final 24 hours of their lives.

The pika does not hibernate and gathers a food supply in its den. Its food-gathering territory surrounds the den and covers an area of around 700 square metres.

The researchers say they’ll continue their work on the caterpillar–pika relationship to explore the long-term implications for increased insect populations and competition for scarce food resources in northern mountain environments.

Barrio was the lead author on the collaborative research project, which was published April 24 in the journal Biology Letters.