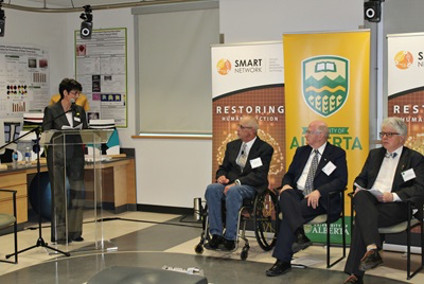 Vivian Mushahwar, director of the SMART Network, addresses dignitaries in U of A lab space

An $8-million state-of-the-art facility has opened on campus supporting the work of 90-plus researchers who are members of the SMART Network. The organization is enabling studies of the nervous system and new solutions for neurological problems and limb amputations.

A network of scientists at the University of Alberta is helping define and develop health innovations for people with unmet medical needs. The Sensory Motor Adaptive Rehabilitation Technology (SMART) Network has been created at the U of A to develop smart medical devices and innovative rehabilitative interventions in an effort to improve quality of life and functionality for people with neural injuries and diseases. The network is enabling studies of the nervous system and new solutions for neurological problems and limb amputations.

“We work together in an effort to understand how the nervous system works, how the brain works, how the spinal cord works and what happens when there’s an injury or disease,” says Vivian Mushahwar, director of the SMART Network Innovation centre. “We then create solutions by drawing on principles from neuroscience, biology, engineering, computing, neurosurgery and rehabilitation to improve function.”

“We focus on making the solution, be it a wearable device, an artificial limb or even an implanted microdevice, feel and behave as though it is part of the person and not just an artificial entity. For example, we want an artificial limb to seamlessly respond to the will of the user and to let the person feel how the limb is moving and what it is touching. We ultimately want to integrate the machine and the human to provide the best functional outcomes.”

The SMART Network, led by Mushahwar, is comprised of more than 90 researchers in the fields of medicine, rehabilitation, computing science and engineering. It is based in a state-of-the-art centre for neural interfaces and rehabilitation neuroscience that was created with just under $8 million in funding from the Canada Foundation for Innovation, Alberta’s Ministry of Economic Development and Trade, and Alberta Innovates. The centre is headquartered in newly-renovated and equipped common space in the U of A’s Katz Group Centre for Pharmacy and Health Research.

The foundation of the Network was created in 2010 as a core group of like-minded scientists began collaborating together. The team received approximately $5 million dollars from Alberta Innovates - Health Solutions (now Alberta Innovates) from 2010 to 2015 which it was able to leverage into $40 million in additional funding. The researchers decided to formally unite into the SMART Network as they realized both their collective successes and the areas still in need of improvement.

“We created an environment and a culture where people work seamlessly between the different disciplines and come up with solutions together. We’ve come up with solutions faster than we’ve done ever in the past as individuals,” says Mushahwar. “As we were progressing as a team we realized where the gaps were in terms of facilities. The Network was set up to fill those gaps and to provide a valuable resource to Alberta, supporting the Province’s effort in generating a health innovation-driven economy and enhancing quality of care.”

"The University of Alberta extends its congratulations to Dr. Mushahwar and her colleagues on the launch of the SMART network,” says Lorne Babiuk, vice-president (Research) at the U of A. “The collaborative model that has been used to create the network is the way of the future: harnessing the expertise researchers from a wide variety of disciplines, the impressive leveraging of initial funding, and the transferring of knowledge into practical applications that improve the quality of life of Albertans. The U of A is proud to be a partner in this endeavour, which is also providing essential training for the next generation of researchers and innovators." 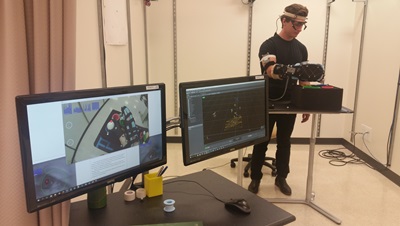 The end goal of the Network is to transfer knowledge and innovations to clinical care to enhance standing, walking and reaching in people with limb amputations or neural injury or disease, and prevent secondary complications such as pressure ulcers and deep vein thrombosis. Other key partners include private industry, clinical centres, charitable organizations and importantly, volunteer participants living with neural damage who participate in studies.

“It gives you goosebumps when they come back so excited the following day and say, ‘Guess what I was able to do today that I wasn’t able to do last week?’,” says Mushahwar. “We’re not going to make people marathon runners. We may not be making them supermen or superwomen. But we are going to improve the quality of life and they are seeing it, they are noticing it a whole lot more than we can actually appreciate.”