Smart nutrition: what to eat to help you succeed during exams

U of A nutrition student offers practical tips to help you perform to your fullest potential when stress is high and time is short. 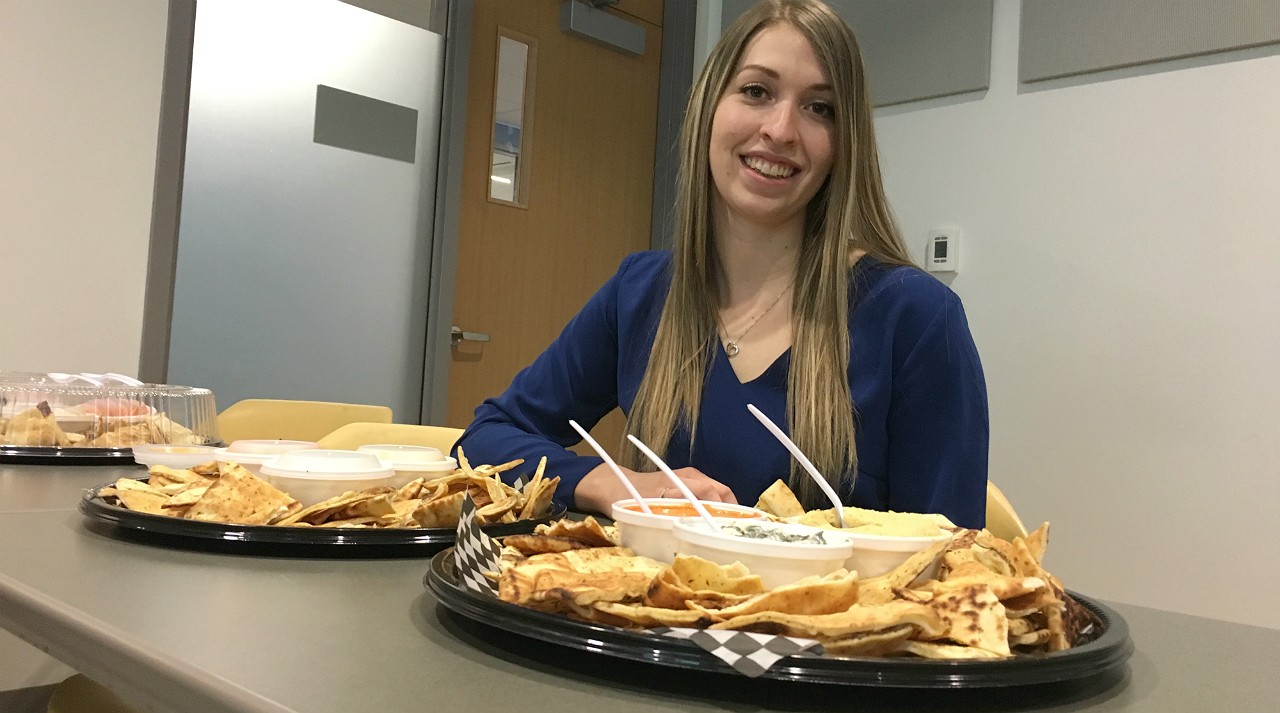 “They are the classics,” the go-tos that post-secondary students reach for to keep themselves fed during midterms and finals, when stress is high and time is short, she said.

But all that sugar, fat and salt—not to mention empty calories—can get in the way of tackling those tests.

“There are a wide range of effects if you’re not eating properly,” said Benoit, a dietetic intern and program lead for Speaking of Healthy Eating, a student-run U of A nutrition education group.

Memory, sleep and energy levels can all suffer with improper eating, resulting in fatigue and lack of focus that dull the senses and make exams an extra-tough slog.

“It’s important to take the time to nourish your body properly so you can perform to your fullest potential,” Benoit said.

Stress eating usually goes one of two ways: either overeating or undereating, she noted.

Under tension, students tend to overindulge by eating a lot of what they crave most—usually foods high in fat or sugar.

“It’s a coping mechanism. These are their comfort foods, and it links back to when you eat something tasty and it makes you feel good,” Benoit explained.

Even when they have the option of ordering a salad, they’ll still go for something heavy like pizza, pasta or chicken wings, Benoit said.

“Though the healthy options are out there, when students are stressed, they’re going to reach for that comfort food.”

Others react by not eating enough.

“When they’re very stressed, some students lose their appetites completely, especially closer to an exam or a presentation. Their stomach gets upset; sometimes food may even nauseate them. With continuous undereating you get low energy levels.”

But eating smart for exams is possible, simply by reaching for healthier on-the-go foods, Benoit said. Here’s how:

When cramming for exams

It’s easy to fill and then empty a bowl of high-calorie munchies while hitting the books, but when the urge hits, try to avoid eating if hunger isn’t the issue.

“Take a break and chat with a friend or exercise instead,” she suggested.

If snacks are a must, try a piece of fruit, whole grain crackers and cheese or unbuttered popcorn. If less healthy choices like chips are on the menu, limit the portion.

“Instead of having a whole bag, put a handful in a bowl and put the bag away. That helps avoid mindless eating while you’re distracted.”

Benoit advises students to also be mindful of their alcohol intake, not just when getting ready for exams, but all semester long.

“It’s OK to have a casual beer or two while studying, but drinking too much can cause headaches and dehydration,” she said.

She suggested following Canada’s Low-Risk Alcohol Drinking Guidelines, which recommend no more than two drinks daily for women and three for men.

Caffeinated drinks like coffee, energy drinks or pop—the standby for many a student—should also be limited, not ramped up, Benoit said.

“Too much is not a good thing, since the caffeine can lead to more anxiety and irritation.”

She recommends keeping it to no more than three 250 millilitre cups per day, and one after 6 p.m., to avoid interfering with sleep.

“It will provide your brain with the energy you need to get through a test,” she said.

Forget that bowl of sugary cereal and instead have a more balanced breakfast, such as peanut butter on toast with a banana and a glass of milk, or substitute the toast for overnight oats, a make-ahead type of raw oatmeal.

“It’s good to eat every three to four hours,” Benoit advised. “If the exam is at noon and you had breakfast at eight, you may want to have a snack before the test starts.”

She recommends healthy snacks such as hummus dip and sliced veggies or peanut butter and apple slices. Those with nervous tummies can try something light, like a glass of milk.

"The most important thing is to drink water, because dehydration can affect your concentration. Take a water bottle with you,” she suggested.

For test periods that last up to three hours, it’s also smart to take a snack like a container of trail mix or dried fruit.

Try to eat healthy on an ongoing basis.

“You want to eat from all four food groups and divide your plate for a meal,” she said.

Half the plate should be for fruit and vegetables, one-quarter for protein like meat or legumes and one-quarter for carbs, like rice or a potato. Milk or an alternative like a slice of cheese should also be part of a meal.

Smart nutrition: what to eat to help you succeed during exams