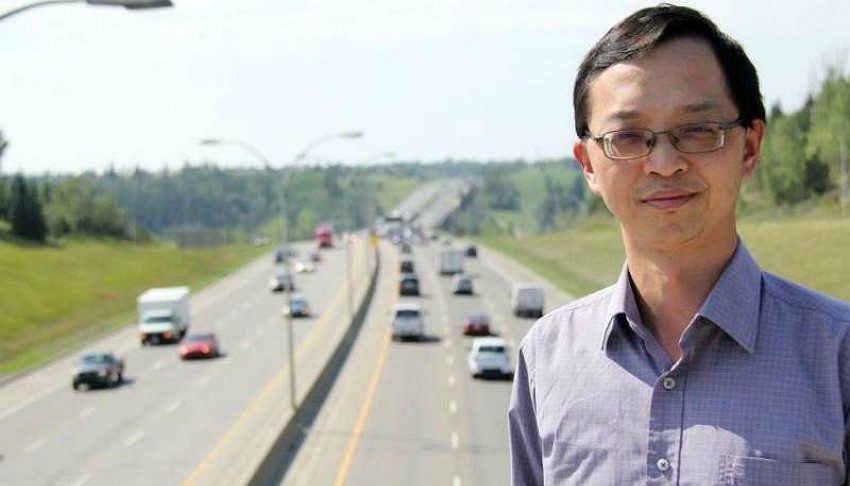 Tony Qiu, director of the U of A’s Centre for Smart Transportation, leads the research team that will use $500,000 in federal funding to test the security of connected automated vehicles and road infrastructure in a connected network being piloted in Edmonton. (Photo: Faculty of Engineering)

A futuristic road system that allows vehicles to communicate with each other and the road around them got a funding boost yesterday, to test the security of the information going back and forth.

The Security Credential Management System (SCMS) for connected automated vehicle technology will be incorporated into the U of A-led ACTIVE-AURORA connected vehicle test bed network, thanks to a $500,000 grant from Transport Canada.

As part of the second phase of the test, Qiu’s team is looking to shore up the security protocols to safeguard against security breaches when vehicles begin communicating with each other and the traffic management centre.

“Developing a Security Credential Management System is an essential technical component to ensure that connected vehicles can securely function and communicate effectively as they become more widespread,” said Tony Qiu, director of the U of A’s Centre for Smart Transportation in the Department of Civil and Environmental Engineering. “It is a critical component that will help us move one step closer to seeing more of this technology on public roads.”

Qiu and his team are now working with the city testing special vehicle signal technology on 23rd Avenue. Other test beds in Edmonton are on the west leg of Whitemud Drive and in the northwest corner of Anthony Henday Drive. A new connected and automated vehicle test track is being set up at the U of A’s south campus to look at how the technology can be used to reduce congestion and improve safety and traffic flow.

Qiu’s team is also working with Edmonton and Calgary on autonomous shuttle testing.

Amarjeet Sohi, federal minister of infrastructure and communities, was on campus for the announcement of the project, which is part of $2.9 million in funding from Transport Canada’s Program to Advance Connectivity and Automation in the Transportation System.