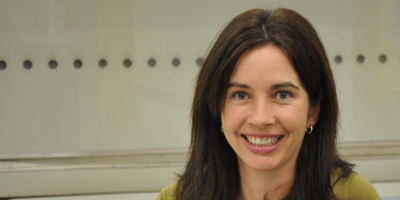 Rachel McQueen of UAlberta's Department of Human Ecology found that fabrics advertised as antimicrobial are better at beating odours in lab tests than in human tests.

(Edmonton) Anti-odour clothing may not be living up to its promise, and a University of Alberta researcher is saying it could be a matter of how the products are tested.

In two separate experiments, Rachel McQueen, a human ecology researcher in the Faculty of Agricultural, Life and Environmental Sciences, and her team found that some antimicrobial textiles were far more effective at performing their advertised tasks in the lab than in testing on humans.

In one experiment, the fabrics were designed to help reduce risk of infection; in the second, the fabric was treated with a silver compound that can be marketed as preventing odour in clothing.

The first experiment analyzed the effectiveness of three textiles, each coated in different antimicrobials: triclosan, a zinc pyrithione derivative and a silver chloride-titanium dioxide compound. People wore the fabrics on their arms under plastic film for 24 hours.

The researchers found that the silver-chloride titanium dioxide compound eliminated hardly any bacteria. Overall, they found the results from the human tests were not comparable with results from lab tests in terms of how well they prevented microorganisms from surviving in the textile.

The second experiment, which had similar results, tested whether polyesters treated with bioactive concentrations of an antimicrobial silver chloride compound reduced armpit odour and bacterial populations. Although lab testing showed antimicrobial activity, the treated fabrics did not reduce odour or bacterial intensity in human testing.

McQueen said that anything from sweat to the proteins in the human body can disrupt the antimicrobial properties of a fabric.

“In reality, when it goes to the point that it gets put on a textile … it may not have the same level of effectiveness as the ones they studied,” she said.

McQueen said these findings highlight the importance of human testing, which is less common than lab testing in textile product development. Because the textiles appear to be effective at reducing bacteria in the lab, she said, they may be advertised as being anti-odorous, although they may not necessarily be so when actually worn.

For now, McQueen suggests thinking twice before trusting advertised claims about a textile.

“It’s just a real spectrum to how effective they may truly be. So I’d say, from a consumer’s point of view, if you’re buying something that says it’s antimicrobial, it may not be,” she said.

“I think that’s important to consider in relation to a lot of claims made about textiles—that is, to be skeptical about the claims marketers make.”

McQueen’s research was published in the International Journal of Clothing Science and Technology.