Sniffing out a solution to smelly clothes 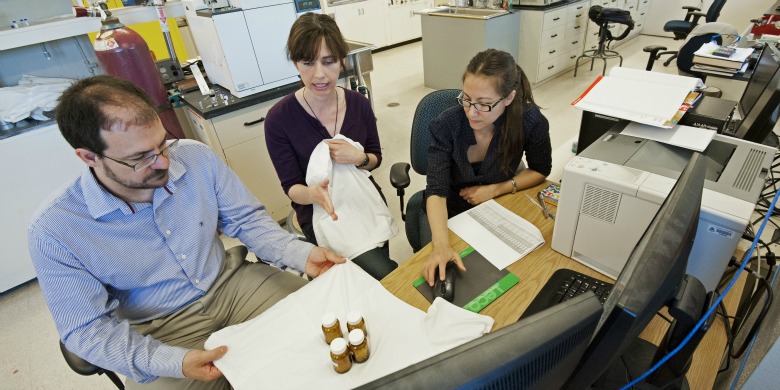 (Edmonton) University of Alberta scientists are using smelly gym clothes to understand how to build a better, odour-free garment.

Using state-of-the-art techniques for molecular separations in a U of A chemistry lab to analyze a pile of sweaty T-shirts worn and washed by 18 study participants, lead researchers Rachel McQueen and James Harynuk joined forces to tackle the problem of stinky workout gear.

"It was a great way to combine our respective research interests and resources from different faculties, to look at an everyday problem," McQueen said. The project also involved some assistance from sensory studies in the Faculty of Agricultural, Life and Environmental Sciences and laboratory medicine in the Faculty of Medicine & Dentistry.

The stack of 36 shirts was specially sewn with two test fabrics—untreated cotton matched either with untreated polyester or with cotton treated with a silver-chloride antimicrobial, designed to fight odour-causing bacteria in sweat. Participants wore the bisymmetrical shirts when exercising, then washed them after each workout.

For the research, the underarms were cut from each T-shirt. The washed and unwashed versions were analyzed for bacterial counts. Using high-tech methods—gas chromatography and mass spectrometry— in Harynuk’s lab, the odorous molecules were also examined.

The compounds in the sweat were separated and analyzed, with individual molecules being identified. The analysis revealed between 1,000 and 2,000 compounds in the odour profiles of each shirt.

Though he is more used to working in the fields of petroleum and forensics, Harynuk tackled the T-shirt project with no qualms.

“It sounded neat.  A lot of our lab work is more on the theoretical side of data interpretation. Here, we had to think about sample preparation and other hands-on procedures, and this project had a definite real-world application that is interesting to our students and shows how science is used to solve problems,” Harynuk said.

The detailed analysis of the shirts may ultimately lead to bigger findings, he added.

“We may find ways to target compounds in the process of designing textiles that don’t retain certain odour-causing molecules.”

Their research showed that, for less reek in workout gear, cotton is better than polyester. The experiment also revealed that the T-shirts treated with the antimicrobial finish were not effective in cutting body odour.

“Fabric options vary for workout clothing, but for anyone concerned about body odour, cotton would be a preferable choice,” said McQueen.

“Ultimately, the ideal is to find a formula for an odour-resistant textile that can be washed less frequently between workouts, resulting in a more sustainable garment,” she added.

The challenge is in changing the perception of soiled clothing, she noted.

“An item may not look dirty, but it smells dirty when people do the ‘sniff test.’ If clothing didn’t look or smell soiled, people might be willing to wear something more than once or twice before throwing it in the laundry—which would really be better for the environment.”

Sniffing out a solution to smelly clothes
Newsroom