U of A biologists examine impact of snowfall events on wolves in northeastern Alberta. 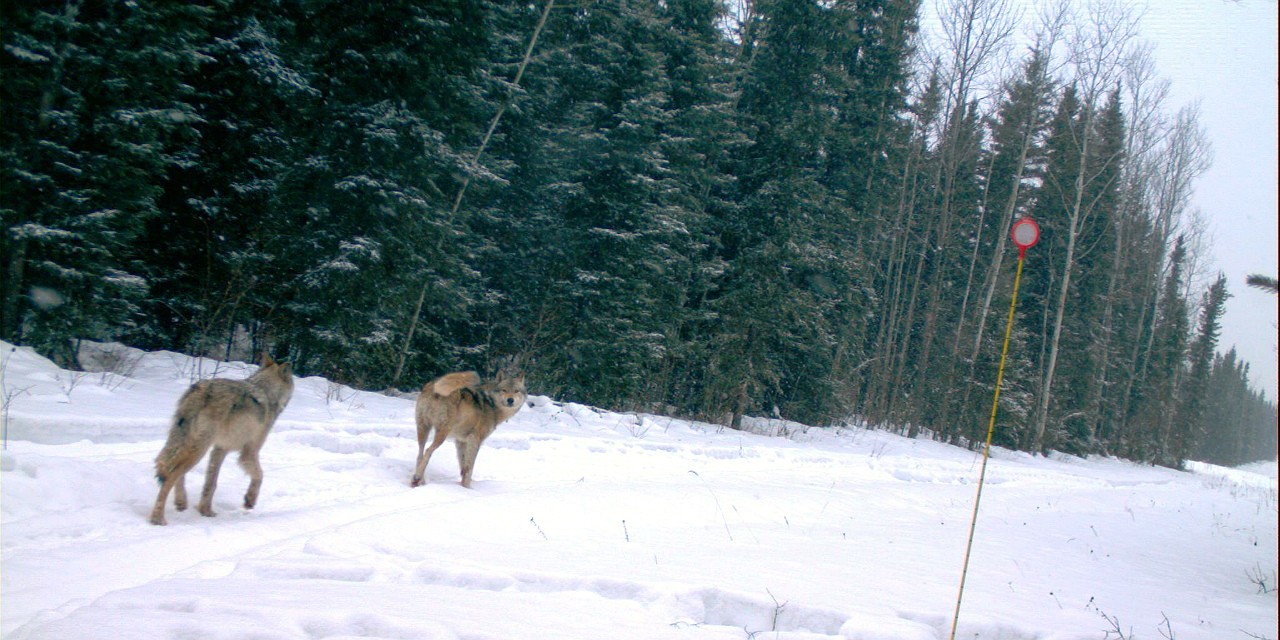 Two wolves on the move are captured by a trail camera in northeastern Alberta. A new study by U of A biologists shows that wolves move more slowly and travel less distance when snow is falling. (Photo courtesy Amanda Droghini)

Wolves travel shorter distances and move slower during snowfall events, according to new research by University of Alberta biologists.

The effects were most pronounced at night, when wolves hunt, and behaviour returned to normal within a day.

“Our findings suggest that there is something about actively falling snow that causes wolves to slow down,” said Amanda Droghini, a former MSc student who is the lead author on the study, which was the first to examine how large carnivores respond to snowfall events.

“We don’t know the exact mechanism behind that. It’s unlikely that they were staying still because they were feasting on a recent kill. Instead, active precipitation might affect wolves’ hunting abilities. Like rain, snow clears the air column of scent molecules. So maybe falling snow makes it harder for wolves to detect the smell of prey,” she said.

Over the course of two winters, researchers used remote cameras to identify snowfall events and estimate snow depth. They collected telemetry data from 17 wolves to calculate travel speed and duration, as well as resting periods.

With the effects of climate change on precipitation in the boreal forest region uncertain, it is difficult to predict the implications for wolves. Studies such as these increase understanding of how large mammals react to normal snowfall events, but the type and amount of winter precipitation will likely have an impact on animal behaviour and the energetic cost of movement, according to Droghini, who conducted the research under the supervision of Stan Boutin, Alberta Biodiversity Conservation Chair.

“Winter is already challenging for many wildlife species because moving through snow requires more energy. Snow can also make it harder for animals to access food resources,” she said.

“Anything that increases those costs, such as increased rain-on-snow events, could lead to nutritional deficiencies, poor body condition and even starvation as animals are unable to make up for those additional costs. That is one of the worst-case scenarios but, in truth, we know very little about potential changes to precipitation patterns and how wildlife will respond to those changes.”

The study, “The Calm During the Storm: Snowfall Events Decrease the Movement Rates of Grey Wolves (Canis lupus),” was published in PLOS One.