When you win a medal, the amount of joy you experience is extraordinary. On the other side of joy is pain and suffering. Being able to accept the highs and lows of life, and finding other outlets after sport, can be very challenging.

So you’ve competed at the Olympics. Now what?

Finding the next act after winning, or overcoming failure, can be just as challenging as getting to the podium, say UAlberta experts. 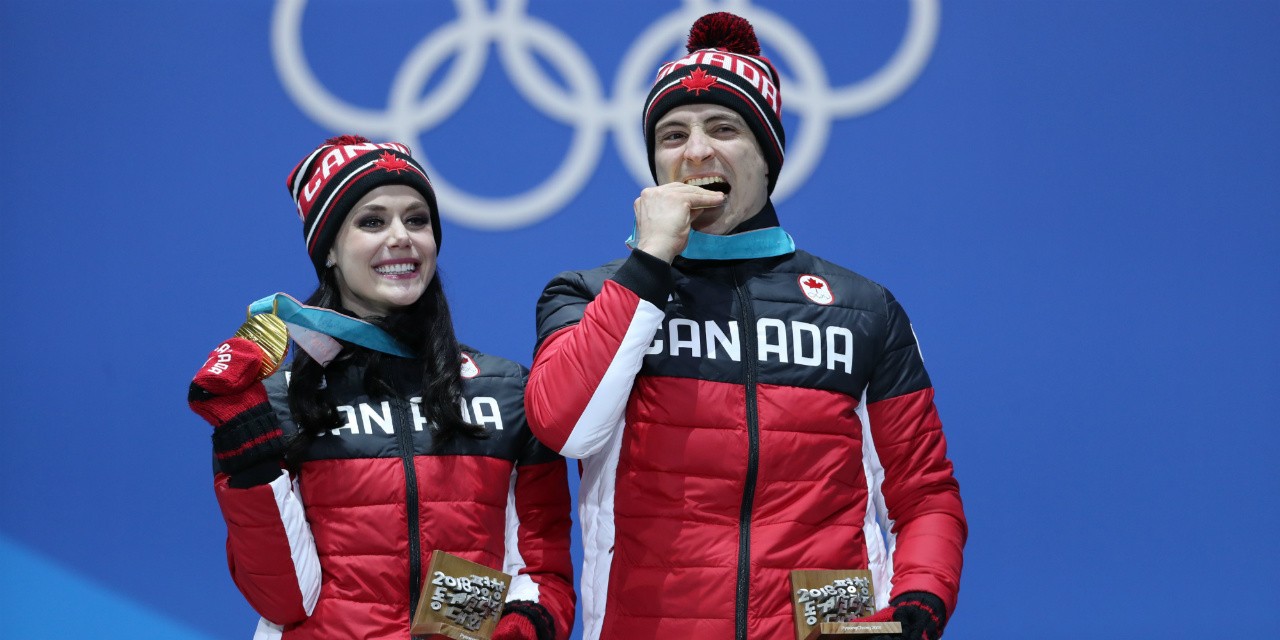 How will Olympians Tessa Virtue and Scott Moir find a next act after tasting victory at the pinnacle of their sport? It will depend on how much their sense of identity and self-worth is wrapped up with being athletes, say UAlberta sport psychology experts. (Photo: Canadian Olympic Committee)

A select few athletes will win at the Olympics, most will fail and all, sooner or later, will have to move on.

The key to dealing successfully with all three eventualities depends on the mindset and expectations of the athlete, and how well they employ various coping mechanisms, say University of Alberta sport psychology experts.

Klaudia Sapieja, a mental skills coach with University of Alberta Athletics, said failure in the moment is extremely disappointing for all athletes. But whether it leads to disappointment that lasts a few days or to something more extreme, like depression, depends on how the athlete deals with pressure.

“Athletes who fear failure experience more pressure,” said Sapieja. “A big part of readying athletes for competition is preparing them to handle the pressure before the competition starts. Just as important, but not talked about as much, is how they are going to cope when the competition doesn’t go according to plan.”

Sapieja said the concept of mindfulness—an awareness and eventual acceptance that the awful feelings that accompany defeat are normal—has become popular in sport psychology circles as a way for athletes to overcome the despair that comes with failure.

The value of self-compassion

Athletes with a strong sense of self-worth are able to let go of defeat faster, she explained. For athletes who become overly critical of their performance after a loss, she suggested self-compassion is the first step.

“Self-compassion is just about being more gentle with yourself in the face of failure.”

Amber Mosewich, a sport psychology researcher in the Faculty of Kinesiology, Sport, and Recreation, said research suggests that for athletes with a high sense of athletic identity—a sense of self wrapped up in being an athlete—their performance in terms of how they stack up can be quite impactful in how they view themselves.

Mosewich said her research on varsity athletes shows that tools to promote self-compassion are effective in attenuating negative thoughts, emotions and behaviours after a setback.

Mosewich was part of a research team that had athletes engage in a series of writing exercises in which they reflected back on a recent significant setback.

In one exercise, athletes were asked to write to another athlete who had a similar experience.

“We wanted them to tap into that common humanity aspect,” said Mosewich. “This strategy can direct people to sources of social support, which research suggests can be quite helpful in dealing with negative experiences.”

In another writing exercise, athletes were asked to write a letter to themselves as they would to a training partner or a friend.

“Often we will be much more harsh and judgmental than we ever would be to someone close to us,” she said.

In a final exercise, the researchers wanted to prompt mindfulness by having athletes write about their loss more objectively to keep thoughts and feelings in balance, rather than getting carried away with emotions or denying or avoiding the issues.

“What we saw with this study was a decrease in rumination, self-criticism and excessive concern over mistakes, and an increase in compassion,” she said. “There is going to be that disappointment that an athlete has to deal with; it is how quickly we can get them to refocus, pull out the positives and the learning experiences, and move on.”

Finding the next act

Often more difficult than managing loss is managing the end of an athletic career—even when the athlete goes out on top, said Sapieja.

“When you win a medal, the amount of joy you experience is extraordinary. On the other side of joy is pain and suffering. Being able to accept the highs and lows of life, and finding other outlets after sport, can be very challenging.”

She said the constant striving for excellence and the lifestyle that comes with high-performance sport can be addictive. Mix in the creeping realization that everything in life is temporary, and suddenly you have an athlete that stays in the game too long.

“Walking away can be a challenging time in an athlete’s life, and it depends if they are ready for it or not.”

She added that it is innately human to strive for something.

“I think that is deeply rooted in a lot of us, to achieve things in any domain—music, arts, whatever you choose. There is a strong desire to strive and do well.

“Usually, high-achieving athletes have that competitive drive and they will apply it to another domain.

Sapieja noted that her work with U of A varsity athletes is different from her work with Olympic athletes, because the student-athletes face the end of sport and one of life’s crossroads in the same moment.

“With varsity athletes, it’s more, ‘What am I going to do with my life?’” she said. “It can be even more challenging (for them) in a way, because they are potentially walking away from sport and starting a new life.

“It is an exciting time, but there are definitely a lot of emotions in the last year.”

So you’ve competed at the Olympics. Now what?