U of A researcher looks into how Edmonton-based atheists find purpose and meaning after turning away from religion. 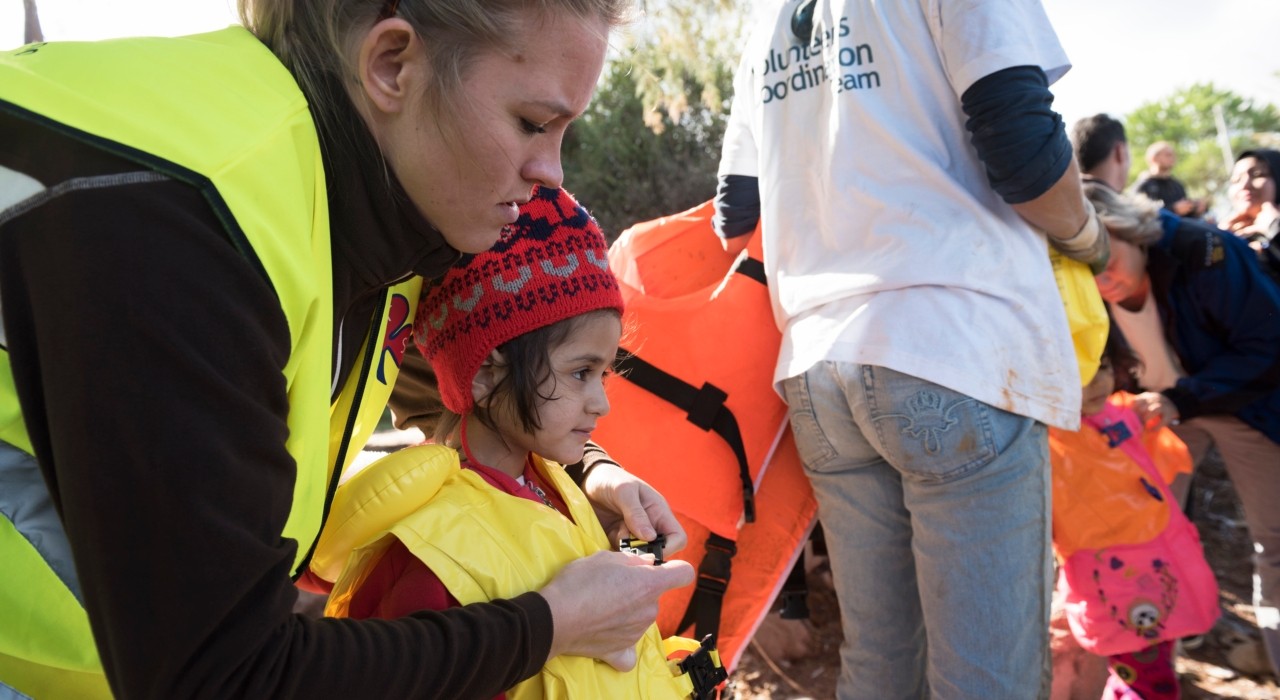 Many atheists in Edmonton are driven by a desire to make life better for marginalized people such as Syrian refugees, according to a new study by a U of A sociologist. (Photo: Getty Images)
A volunteer assists a little girl in removing her life jacket after an overcrowded rubber dingy carrying refugees and other migrants landed on the Greek island of Lesbos, near the town of Skala Sikamineas.

Edmonton has become a provincial hub of sorts for atheist groups with a social justice agenda, according to new research at the University of Alberta.

As part of his doctoral research, sociologist Jonathan Simmons found that while some 2,000 members joined atheist groups to find community after turning away from conventional religion, what sustained them was a desire to make life better for marginalized populations, such as Syrian refugees trying to settle in the city.

Simmons spent two years observing the Society of Edmonton Atheists, the Greater Edmonton Skeptics Society and the now-defunct University of Alberta Atheists and Agnostics as a registered participant, conducting 35 formal interviews with members.

"I lived, played and worked with atheists, so participant observation was the core methodology," he said.

"The members would talk to death about how much they hated religion, get bored with that and move on,” he said. “Then a new member would criticize religion, and that would reinvigorate the group for a time, but then it would again go into a lull."

As the groups got more organized, they realized they had to move beyond criticism, Simmons said, "so they started talking about things like asylum for atheist refugees, and collaborating with religious groups so they’re not always seen as the bad guy.”

Simmons noted the recent trend toward social justice is partly rooted in the larger New Atheism movement that emerged after 9/11, known mainly through the work of skeptics Richard Dawkins (The God Delusion) and Christopher Hitchens (God Is Not Great), who promote rational, evidence-based thinking and science over superstition and religious doctrine.

Contemporary atheism also finds expression in the Atheism Plus movement, proposed in 2012 by blogger Jen McCreight, which encouraged progressive atheists to move beyond non-belief and embrace social justice, feminism and anti-racism while combatting homophobia and transphobia.

“I thought the groups would be more science-focused, more insular,” said Simmons. "But I found a strong social justice appetite, and a focus on providing financial resources to people who have passed their asylum claims.

“They would also try to connect with ex-Muslims in Saudi Arabia, Indonesia and Iraq, helping other organizations get off the ground.”

“The Society of Edmonton Atheists has a long-standing relationship with that community and has been heavily involved in the gay pride parade,” he said.

Having successfully defended his doctoral thesis last September, Simmons hopes to continue his research on contemporary atheism, branching out to examine groups such as Secular Rescue, an organization that provides emergency assistance to writers and activists who face threats due to religious beliefs, and the U.K.-based Faith to Faithless, which helps victims of Sharia law in western households, such as those facing female genital mutilation.