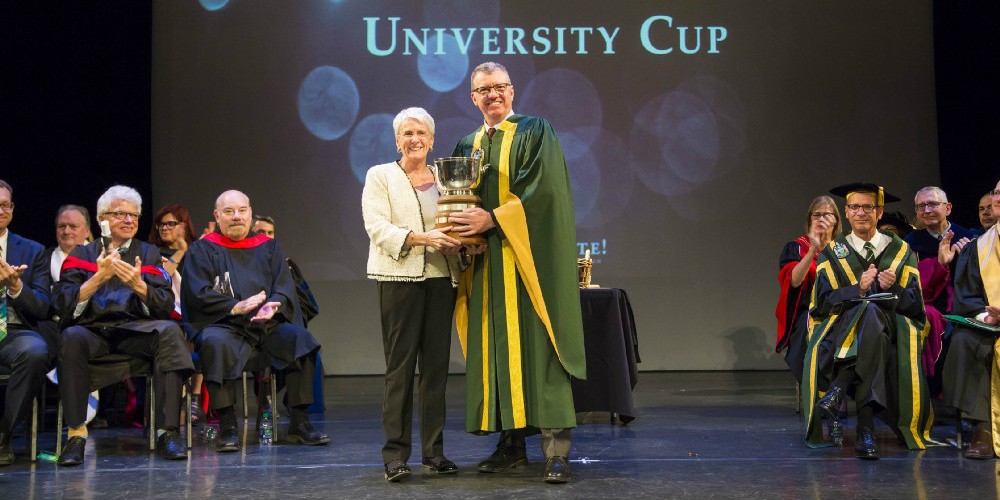 Janine Brodie (pictured here receiving the University Cup from UAlberta president David Turpin in 2017) is one of the newest members of the Order of Canada. (Photo: Office of the Registrar)

When Janine Brodie was appointed chair of the University of Alberta’s Department of Political Science in 1997, its resources were focused almost entirely on undergraduate teaching. But by the time she left the position seven years later after hiring one-third of the department’s current faculty, it was (and remains) the most gender-balanced and racially diverse political science department in Canada, and had gained national recognition for its innovative research and graduate program.

One of the most challenging aspects of her tenure was a pervasive resistance to gender equity and diversity.

“She deftly cajoled, encouraged, charmed and outwitted even her most vicious opponents,” said Lois Harder, current chair of the department.

She said Brodie was unwavering in her pursuit of balanced representation, not only within the department, but also within the discipline itself. This same fierce commitment to social justice informed Brodie’s research in political economy, gender and citizenship.

Throughout her 35-year career, Brodie’s professional and scholarly achievements have garnered accolades from her colleagues and peers, including the University Cup, the U of A’s highest honour, which she was awarded earlier this year.

Nationally, she has been recognized with a Tier 1 Canada Research Chair in Political Economy and Social Governance, and on Dec. 29, she was named a member of the Order of Canada.

“I was thrilled and completely surprised by the call from the Governor General’s Office,” said Brodie. “I had no idea this was in the works!”

Though the Order of Canada is a “significant capstone in anyone’s career,” she said what matters to her most professionally is seeing her graduate students take up academic careers and leadership roles.

“[This] gives me the deepest sense of accomplishment. They are an ongoing source of inspiration, and I hope to see a few more of my graduate students complete their degrees in the next few months.”

Brodie said the task of the political scientist is to “engage with the history of the present.” Giving a voice to the marginalized, defining and deepening the conversation around gender and politics in Canada, and challenging some of its most intransigent narratives mark her career.

“I have explored many different topics over my academic career, from Canada’s early political economy to the contemporary crisis in neoliberalism, but social justice has been the central thread connecting my various projects,” said Brodie, who is now putting the final touches on an edited volume entitled Contemporary Inequalities and Social Justice in Canada (U of T Press).

After earning a PhD in political science from Carleton University in 1981, Brodie taught at Queen’s University before accepting a teaching position at York University. Within nine years, she was appointed full professor as well as a faculty fellow of the Institute for Social Research, inaugural director of the York Centre for Feminist Research and John Robarts Chair in Canadian Studies. From 1997 to 2004, she was chair of the political science department at the U of A, and in 2011, she was named a Distinguished University Professor.

“It’s pretty hard to whittle down Janine’s contributions,” said Harder. “Her inclusive vision for the department and the discipline has redrawn the boundaries of political science, opening it up to a broader range of research questions and methods.”

Brodie joins medical researcher Paul Armstrong as the 2018 Order of Canada recipients from the University of Alberta. Local philanthropist Eric Schloss, an alumnus who founded the U of A’s Canadian Literature Centre, was also named to the Order of Canada.