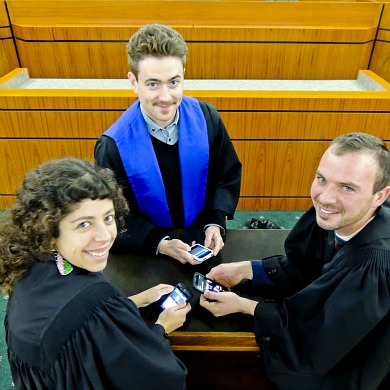 (Edmonton) If you’re a Twitter user, you’re likely used to defining your thoughts in 140 characters or less. But what if you had to wage an important argument or debate that way? That’s what two University of Alberta law students are facing Nov. 20 as they compete in the second annual Twitter Moot.

This competition, hosted by the Vancouver-based organization West Coast Environmental Law, will see the U of A participants and four other teams arguing on Supreme Twitter Court whether or not Canadians (and others) have a right to a healthy global atmosphere.

Law students Pippa Feinstein and Sam Harrison, arguing the case as interveners for the Centre for Indigenous Environmental Resources, seek to reinforce Constitutionally guaranteed Aboriginal rights while striking a balance of rights and responsibilities for all in accessing a healthy ecosystem. Harrison says they benefited from the input of their coach, associate professor Cameron Jefferies.

“Our side of the argument is really founded on Aboriginal law, and Pippa’s done a fair bit of that,” he said. “Cam suggested we look a bit wider to find the leading cases to help frame our argument. He’s been very open and supportive.”

The excitement of a moot court—a mock court in which law students argue imaginary cases for practice—is now amped up by having to argue complex legal issues in a limited number of characters. Some tweets can be prepared in advance, but questions from the Supreme Twitter Justices will take some fast thinking and text-tapping. There is an element of creativity to arguing in this format in that participants can use links to “evidence” such as YouTube videos, Instagrams, online articles and the like to make their points.

To make things more challenging and to keep the argument from becoming a tweet-for-all, there are rules that go along with arguing in such a venue.

“Each of the parties will have 10 minutes of tweeting time, the judges will try to pick the arguments apart, and we’ll refute their rebuttal,” said Harrison. “It is supposed to be a Twitter court, so when we address the judges, it will be @ML for my lord, or @ML&L for my lords and ladies. There are some procedural aspects that will take up space, but it will keep it formal.”

The Twitter Moot functions as an educational tool as well, says Feinstein, a third-year law student. She contends that this form of public interaction helps people understand moots and the general judicial process. Because the debate focuses on a pressing social issue, it helps them become more involved in the process—from a distance. There are other tangible benefits to becoming involved in this sort of day, adds the self-confessed tweeting neophyte.

“It’s a steep learning curve, but it’s an exciting one, too,” said Feinstein. “It’s an intriguing challenge. Social networking is a great way to raise public consciousness about an issue. And for those pursuing careers in legal advocacy, it can be a really important tool.”

The Twitter Moot competition starts Nov. 20 at 11 a.m. MST. To catch the action as it happens, follow @orangepipsies and @tankersnothanks, or watch the live feed.