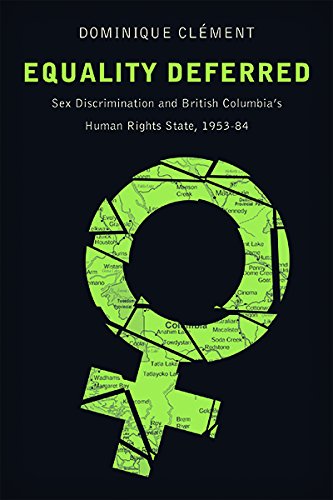 In Equality Deferred: Sex Discrimination and British Columbia's Human Rights State, 1953–84 (UBC Press, 2014), sociology professor Dominique Clément traces the history of sex discrimination in Canadian law and the origins of human rights legislation. Clément chose to focus on British Columbia because it was the first province to prohibit discrimination on the basis of sex, but what precipitated this legislation—and especially what followed—is far from straightforward.

“Sex discrimination represented the largest number of human rights complaints in Canada until the 1990s,” says Clément, adding that women have faced discrimination in law and social practice since the 19th century. Drawing on a variety of sources including secondary literature in law, history, sociology and political science, as well as newspapers, opinion polls and—after two years of Freedom of Information requests—the entire archival record for the Human Rights Commission from the Attorney General,  Clément was able to document a variety of “absurd, almost unbelievable” acts of discrimination.

“[Sexual discrimination] remains as relevant today as it was in the 1970s,” he says. “Firing women for being pregnant is a growing, not declining, problem despite the fact that it was banned over 40 years ago.”

As Clément notes, although the book traces the role of social movements in campaigning for and enforcing the law, it is the individual stories of the human rights investigators who put the law into practice that makes the material so compelling.

“Just last year, a dozen former human rights officers, after reading my book, decided to get together for a reunion at a restaurant in Victoria, B.C. (which I attended),” says Clément. “It was absolutely wonderful to see how my work had brought them back together, and to consider their legacy in defending human rights in Canada—an often thankless job that never pays riches.”

The book has certainly touched a nerve. Equality Deferred was awarded the Clio Book Award by the Canadian Historical Association, received Honourable Mention by the Canadian Law and Society Association and was shortlisted for the Smiley Book Award by the Canadian Political Science Association. Last week, Equality Deferred was shortlisted for the 2016 Canada Prize in Social Sciences. The Canada Prizes are awarded annually by the Federation for the Humanities and Social Sciences in celebration of books that make an exceptional contribution to scholarship, are engagingly written and enrich the social, cultural and intellectual life of Canada.

The self-described historical sociologist continues to work on projects that deal with freedom of information in Canada, terrorism, national security and the Olympics, as well as comparative human rights law and the ability of marginalized people to challenge state power.

“Sex discrimination continues to represent among the highest number of complaints under human rights law in Canada today,” says Clément. “I would like to think that the book has made an original contribution, but at the same time, I have also sought to share people’s life stories.”