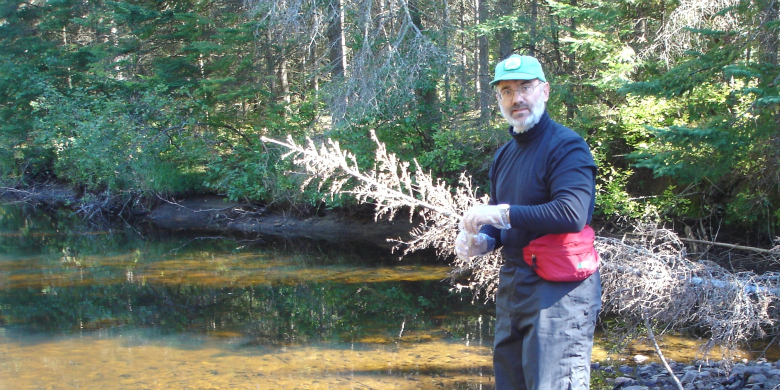 111011-bocockbanner
William Shotyk, professor and Bocock Chair in Agriculture and the Environment at UAlberta, was honoured by the European Geosciences Union for his distinguished 25-year career as a prolific researcher, an international collaborator and a tireless advocate for the environment.

(Edmonton) William Shotyk was a city kid when his dad bought a small farm near the rustic village of Elmvale, Ont., in 1972. It was a move that changed the youngster’s life, launching a career in soil science that has earned the University of Alberta researcher a prestigious European award.

Shotyk, professor and Bocock Chair in Agriculture and the Environment in the Faculty of Agricultural, Life and Environmental Sciences, has been awarded the Philippe Duchaufour Medal by the European Geosciences Union.

Given to one scientist each year by the Soil System Sciences Division of the European Geosciences Union, the award—one of the world’s most prestigious—honours distinguished service to soil science.

Shotyk, who receives his award next spring in Vienna, Austria, is “over the moon” about the distinguished recognition of his life’s work. “To have an outcome like this is really awesome,” he said.

The awards announcement from the European Geosciences Union describes Shotyk as “the purest example of what a scientist should be, curious by nature and always devoted to tackle individual pieces of science with the aim to solve the wider and intricate puzzle of soil system sciences.”

The award pays tribute to Shotyk’s 25-year career devoted to studying the environmental effects of heavy metal pollution in soils, and was given in recognition of his numerous studies (185 publications), academic papers (140 in refereed journals), book chapters, and more than 60 invited research presentations and public lectures, as well as his work with documentary filmmakers.

In its announcement, the European Geosciences Union  praised Shotyk’s dynamic collaboration with colleagues from across Europe, the United States and Canada, his work on peat bog archives and his “tireless efforts in environmental projects,” including the establishment of the Elmvale Foundation, a registered charity for environmental education, and the Elmvale Water Festival. Both initiatives are based on the original farmland purchased by his father, and are dedicated to awareness and preservation of water quality.  Also on the property, Shotyk has since established the Elmvale Groundwater Observatory, to better understand how groundwater is filtered by soil and to develop improved methods of testing water for trace minerals.

Shotyk joined the U of A in 2011 as the inaugural Bocock Chair established in the Faculty of Agricultural, Life and Environmental Sciences. The internationally renowned scientist plans to develop a world-class facility—which he affectionately dubs the “SWAMP lab”—at the U of A, devoted to agricultural and environmental research and teaching, with a focus on chemical transformations at the interfaces among soils, water, air, manures and plants.

Excited about his current work, Shotyk is grateful for a fertile research environment that flourishes at the U of A.

“The university couldn’t be more supportive, especially within ALES. Our faculty is like a family, with a collegial atmosphere, and it’s a receptive environment, open to new ideas.”

A passion for soil, water and plant science took root back on the farm in Elmvale, where Shotyk started with a small garden, and where he has since planted more than 25,000 trees, with the help of family and friends.

“It was my first introduction to soil. I was fascinated that you could put seeds into the earth and before you knew it, you were eating tomatoes and cantaloupes. And of course, the soil and the water are key to that.”

Shotyk’s continuing goal through his work is to find ways to use soil sustainably, whether it is being put to use by industry, agriculture or forestry.

“Soil is the thin skin of the Earth that is critical for life on this planet.”