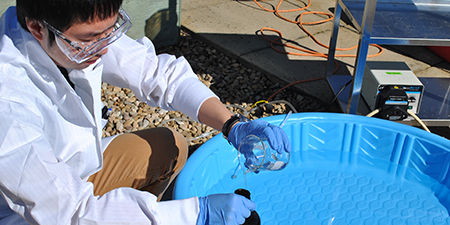 (Edmonton) Cleaning up oilsands tailings could become a lot faster—and greener—thanks to a new technique developed by University of Alberta engineering professors that uses solar energy.

Instead of using ultraviolet lamps as a light source to treat oilsands process affected water retained in tailings ponds, civil engineering professors Mohamed Gamal El-Din and James Bolton have found that using sunlight as a renewable energy source treats the waste water just as efficiently, but at a much lower cost.

“We know it works, so now the challenge is to transfer it into the field,” says Gamal El-Din, who also worked on the project with graduate students Zengquan Shu and Chao Li, post-doctoral fellow Arvinder Singh and biological sciences professor Miodrag Belosevic.

“This alternative process not only addresses the need for managing these tailings ponds, but it may further be applied to treat municipal waste water as well. Being a solar-driven process, the cost would be minimal compared with what’s being used in the field now.”

Oilsands tailings ponds contain a mixture of suspended solids, salts and other dissolvable compounds like benzene, acids and hydrocarbons. Typically, these tailings ponds take 20-plus years before they can be reclaimed. The solar UV/chlorine treatment process would make water decontamination and detoxification immediate.

The sun’s energy partially removes these organic contaminants due to the direct sunlight. But when the sunlight reacts with the chlorine (or bleach) added to the waste water, it produces powerful oxidative chemicals known as hydroxyl radicals, which remove the remaining toxins more efficiently. The chlorine leaves no residuals because the sunlight causes it to decompose.

In laboratory-scale tests, the solar UV/chlorine treatment process was found to remove 75 to 84 per cent of these toxins.

“With this solar process, right now, the waste water on the top of the tailings ponds is being treated. But because we have nothing in place at the moment to circulate the water, the process isn’t being applied to the rest of the pond,” says Gamal El-Din.

”Because we are limited by the sunlight’s penetration of the water, we now must come up with an innovative design for a mixing system, like rafts floating on the ponds, that would circulate the water. Installing this would still be much more cost-effective for companies. It is expected that the UV/chlorine process will treat the oilsands process affected water to the point that the effluent can be fed to a municipal waste water treatment plant, which will then complete the purification process sufficiently so the water can be discharged safely into rivers.

“This process has been gaining a lot of attention from the oilsands industry. We’re now seeking funds for a pilot-plant demonstration and are looking at commercializing the technology.”

The team’s research findings were published in Environmental Science and Technology.

The research was funded by Trojan Technologies, an NSERC Collaborative Research and Development grant, Alberta Innovates – Energy and Environment Solutions, and the Helmholtz-Alberta Initiative.