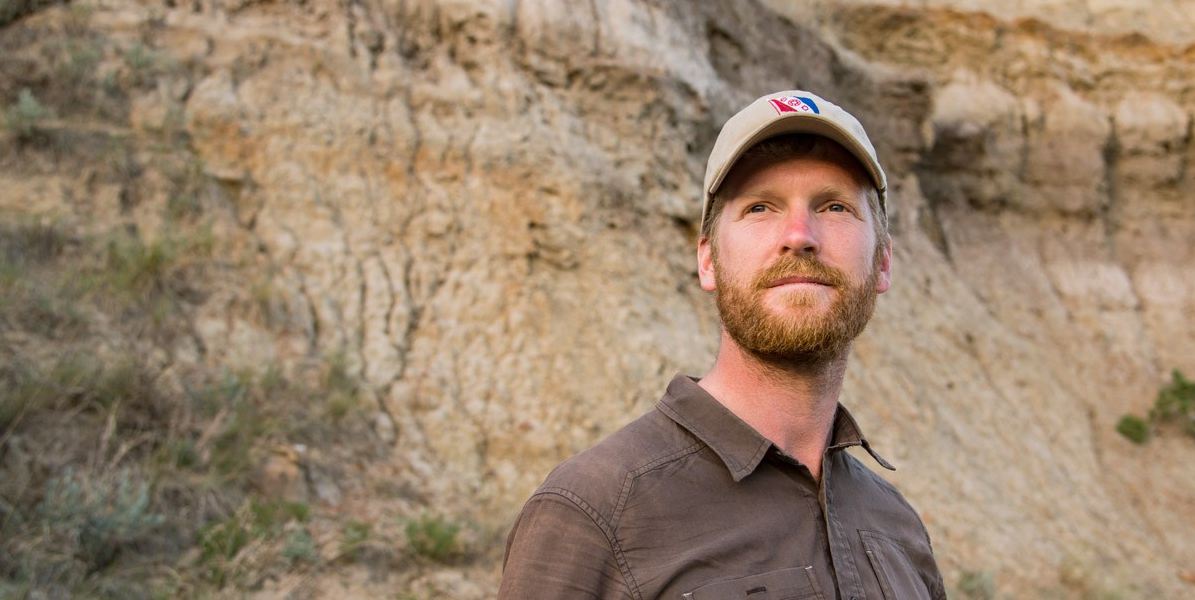 Aaron Van der Reest, seen here on the bank of the Red Deer River in Dinosaur Provincial Park, says there isn’t a day in the field that goes by that he doesn't think of his mother. (Photo by Richard Siemens)

Aaron Van der Reest’s story reads like a Hollywood script. A young man travels from Ontario to Alberta to pursue his passion in paleontology. He is forced to drop out of school when he runs out of money. Seven years later, at his mother’s deathbed, she tells him that her dream is that he use the inheritance she’s giving him to return to school to finish his degree.

Van der Reest’s fascination with dinosaurs and paleontology began at a young age. “When I was 12 or 13, my mother took me to a talk by Phil Currie at Science North in Sudbury. Ever since then, I wondered what it would be like to work with him—the living legend of dinosaur exploration.”

In 2005, Van der Reest came to the University of Alberta in pursuit of just that. But in his second year, he ran out of money, forcing him to find a job. He worked as a hazardous materials environmental consultant, but kept his hands in paleontology, running a fossil preparation and casting company on the side. However, the urge to return to his studies never left him.

When his mother was diagnosed with cancer and died only three months later after a brief but brave battle, it gave Van der Reest pause as he reflected on how he wanted to live his life.

“She told me not to waste (the inheritance).

“I thought, I could be making decent money for the rest of my life, but I’m sitting there at a desk and not really excited about what I do. And if you’re not happy doing what you’re doing, what kind of life do you have? Though it’s not easy, if you know what you really want in life, if you know that something is going to make you happy, there’s no reason you shouldn’t be able to go back to school. There shouldn’t be any reason you let anything stop you from doing it.”

And so, just one month after his mother died, Van der Reest fulfilled his mother’s dying wish, and his own, and returned to the U of A, eight years after he started.

Returning as a 32 year-old mature student and working alongside undergrads and even graduate students more than a decade younger, was an adjustment for Van der Reest who took some time to get back in the school groove after working for seven years. But he made the most of his return, successfully pursuing undergraduate research in addition to a full course load.

Fast forward to the fall of 2015, and Van der Reest and Currie’s paper on a feathered ornithomid garnered international media attention.

Now 36, Van der Reest is graduating with a bachelor of science specializing in paleontology and will be starting his master’s degree this fall, studying with the iconic Currie.

Van der Reest is spending the summer with other students and Currie in Dinosaur Provincial Park for another field season of dust, sweat, tears and discovery. When he’s out in the field, Van der Reest’s mother is never far from his mind. With his grief fueling his determination, he finds peace in the park.

“She always supported me to come out for school, so this is definitely a place for reflection,” he said, speaking at sunset on the bank of the Red Deer River. “To be able to work out here every summer, pursuing school and my dreams because of her death, there isn’t a day that goes by that I don’t look out at the Badlands and think that the only reason I’m here right now is because of her.”

Van der Reest is publishing his second paper later this summer, a discovery that will forever immortalize his mother’s memory. Following a fossil find he made several field seasons ago in Dinosaur Park, Van der Reest is naming a new dinosaur species in part after his mother, Lynn.