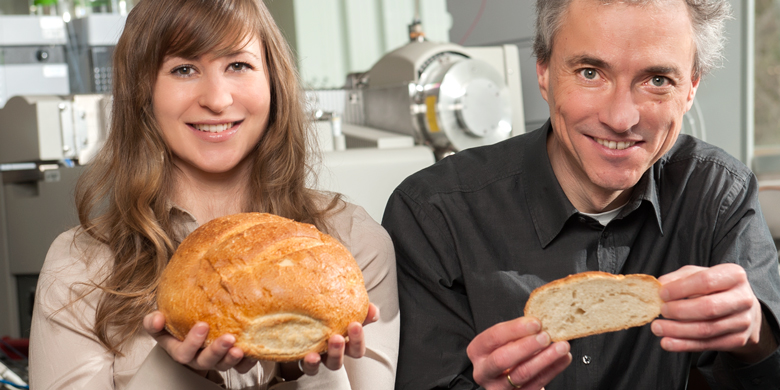 (Edmonton) University of Alberta researchers have found a way to replace artificial preservatives in bread, making it tastier.

After loafing around in the lab analyzing strains of mould fermented in sourdough bread, Michael Gänzle, professor and Canada Research Chair in the Department of Agricultural, Food and Nutritional Science, PhD candidate Brenna Black and collaborator Jonathan Curtis, a professor of lipids research, were able to isolate natural compounds that can help keep bread fresh without altering its flavour.

Preservatives currently added to store-bought bread are safe to eat and extend shelf life, but change the taste and have a distinctive odour, Gänzle said. “Preservatives invariably alter the flavour and smell of bread in a certain way.”

Black, who led the research as part of her thesis, found the results especially tasty, as the sourdough research broke new bread—er, ground.

“The scientific community has always known that sourdough bread has a longer shelf life than conventionally leavened bread, but we weren’t sure why, and this study has been able to uncover a large part of that.”

The U of A research is the first to link certain compounds—hydroxy fatty acids— to antifungal activity and to show that these compounds are formed in the production of fermented foods. “We were able to put known compounds in quite a new context,” Gänzle said.

The findings also have the potential to be used in replacing or supplementing fungicides used in treating crop seeds and protecting crops.

The results appear in the March 6 issue of Applied and Environmental Microbiology.

Black, working under the supervision of Gänzle and Curtis, did all the baking and analysis, and found the results blissful. “The sourdough bread (without preservatives) is beautiful. It smells better. It looks nice, more golden.”

Collaboration was a big part of the study’s recipe for success, she added. Black, who took her undergraduate degree at the U of A, started a master’s program here and then accelerated into PhD studies in AFNS, said the department’s focus on interdisciplinary work was what fed her enthusiasm for food science right from her first class.

“What we have here at the University of Alberta is special, especially in our department, where we have the microbiology and the analytical labs all together. I found that set the U of A apart from other universities.”

Black’s work was able to link the Gänzle group’s expertise in food fermentation with the Curtis group’s interests in lipid analyses.

“A talented graduate student who can both grow bacteria and operate a mass spectrometer is a valuable commodity,” Curtis noted.

Once she earns her doctorate, Black plans to teach at the post-secondary level, sharing her love of discovery about food and the mysteries yet to be unlocked.

“Everyone’s got to eat, and most people are looking for more natural products, but they don’t want to sacrifice quality, so that is a challenge, and I like a challenge.”

The study was funded by the Natural Sciences and Engineering Research Council of Canada and by Ernst Böcker GmbH, a sourdough company based in Germany. The research was also supported by the Canadian Wheat Board, the Canada Research Chairs program and the NSERC Discovery program.